Revisited: Relationships in a Nutshell – Co-pilots & the importance of a joint agenda 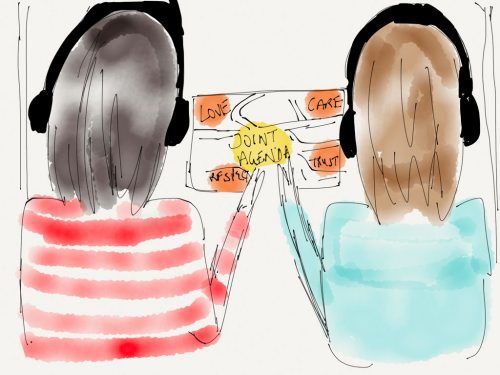 After much observation and plenty of experience, I believe that healthy relationships have joint agendas and co-pilots and unhealthy ones have drivers and passengers with solo and hidden agendas.

When you recognise the importance of being a co-pilot sans a hidden agenda, not only will it be far harder to be swept along by an unavailable or assclown tide, but you’ll no longer be ‘helpless’ in your relationships and will have the ability to work out where you’re at.

We can become very focused on the ‘hallmarks’ – these are what we consider to be the ‘markings’ of a relationship such as sleeping together over an extended period of time, having things in common, great sex, a ‘connection’, ‘chemistry’, future talk, being introduced to people, etc as well as big ticket commitment items like moving in, babies, marriage. These are nice, great even, to have, but without the landmarks, your relationship is all shirt, no trousers.

Many people chase stuff like passion, chemistry and common interests and then wonder why it’s not working. They assume that if these elements are present that the landmarks will automatically follow.

The landmarks of healthy relationships are intimacy, consistency, balance, progression, and commitment as well as shared values and what should come as standard in any relationship – love, care, trust, and respect.

If you have the hallmarks without the landmarks, your relationship is either casual and/or unhealthy. Before you go doing any big ticket commitment items, I suggest you make sure that the landmarks are present first.

As individuals, we each have our own agenda which caters to taking care of our self-esteem with boundaries and healthy beliefs, as well as our values that tell us what we believe are the most important things for us to live authentically and happily.

We use dating as a discovery phase to discover the facts about one another and ultimately whether we can have a shared agenda that respects each party healthily as individuals while creating a common journey for the relationship.

Healthy relationships have co-pilots steering them along with open discussion about the joint agenda as well as all of the landmarks – no hidden agendas. You will steer and plot your journey together and even if at times, one has to man the steering, they continue with the joint agenda. These are mutually fulfilling relationships. 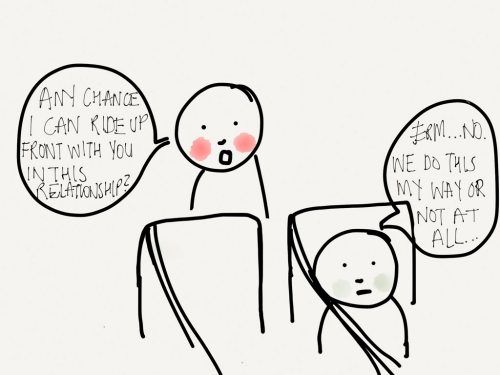 The driver steers the relationship on their terms, agenda, and ‘route’. They may have a solo agenda that they’re open about and/or may have a hidden agenda. They’re sometimes egotistical enough to assume that their agenda is the joint agenda because it’s what they want.

You will know you’re involved with a driver if you attempt to co-pilot and meet restrictions and conflict – they take a parachute and jump, or pull up on the route to say that they need to go to the ‘toilet’ and then disappear. Or maybe they’ll steer the relationship so crazily that you panic and agree to let them be in control. You get the gist.

Drivers are about getting their needs met. They often need a passenger for their ego etc, but they don’t want to step up and put the needed effort into a co-piloted relationship – they’re controlled and often controlling.

Passengers basically take a backseat in the relationship. They tend to get swept up in other people’s agendas because they’re not as street smart (read: relationship smart) as they should be. They may actually be on this journey because through a lack of boundaries and latching onto the hallmarks of a relationship, they were not paying attention to code red and amber behaviour.

They will tack on to the drivers agenda assuming that this is what ‘love’ is about, so they end up not living congruently with their boundaries and values.

Many passengers however, actually know the driver’s agenda and hope to change it. They think if they love enough, get the driver to change, cry, beg, plead, wait, give them their money, that the driver will become a co-pilot and they’ll have a joint agenda.

Passengers with very low self-esteem look to others to create their agenda for them and give them validation. When the relationship ends, they feel lost.

Passengers tend to have hidden agendas even though they won’t always admit it. Sometimes the agenda is about changing the relationship (could be a mix of playing Florence Nightingale and trying to be the exception to the rule or I Can Change Them), but it’s also often about catering to the self-fulfilling prophecy of negative and unrealistic beliefs.

Sometimes passengers try to be drivers or backseat drivers and get shot down. When they end the relationship or they get back together after the driver has promised that things will be different ‘this time’, they may actually feel like the driver.

In some instances, it can seem like it’s passenger:passenger – ie you’re both really messed up together but you will find that under those layers, someone is actually the driver.

Most drivers and passengers are trying to be drivers – they have ‘ideas’ about how they want the relationship to be and try to steer it that way. There are some passengers who actually want to take a backseat role and may be inclined to be victims or helpless.

Passengers and drivers have unhealthy relationship habits and are invariably emotionally unavailable so until they address their issues, being a co-pilot in a mutually fulfilling healthy relationship is unlikely because they are not prepared to be honest and vulnerable enough to risk a joint agenda.

They forget that in a healthy relationship, each party is sharing the risk of being vulnerable to healthily emotionally engage and be authentic in the best interests of their own sense of self and the relationship.

It’s important to recognise that addressing issues in relationships needs to be co-piloted too – you can’t work at something where another person has their foot out the door, has already moved on, or is in denial.

When you leave a relationship that isn’t working for you, it’s because you recognise that your agendas cannot be a joint one.

If you want to establish a relationship on a good footing or quickly determine if you have a ‘driver’ on your hands, do not accept the default role of passenger and take an active role in shaping your relationship with partners. If you discover you’re involved with a driver, don’t burn up your life fuel trying to sort out what you think are their problems – address the issues that make you a passenger first.

In some instances, when you change, the driver may adapt as well, but you’re also likely to find that the relationship is no longer attractive because your mentality has changed.

Basically always seek to be a co-pilot with a co-pilot.

That is relationships in a nutshell.

The Justifying Zone: when a woman needs to justify her emotional or sexual investment
Commitment: If they can't show up for the basics, they won't be able to show up for the long haul
If They Don't Want A Relationship and You Do, You're Incompatible (Don't let 'em hold you back!)