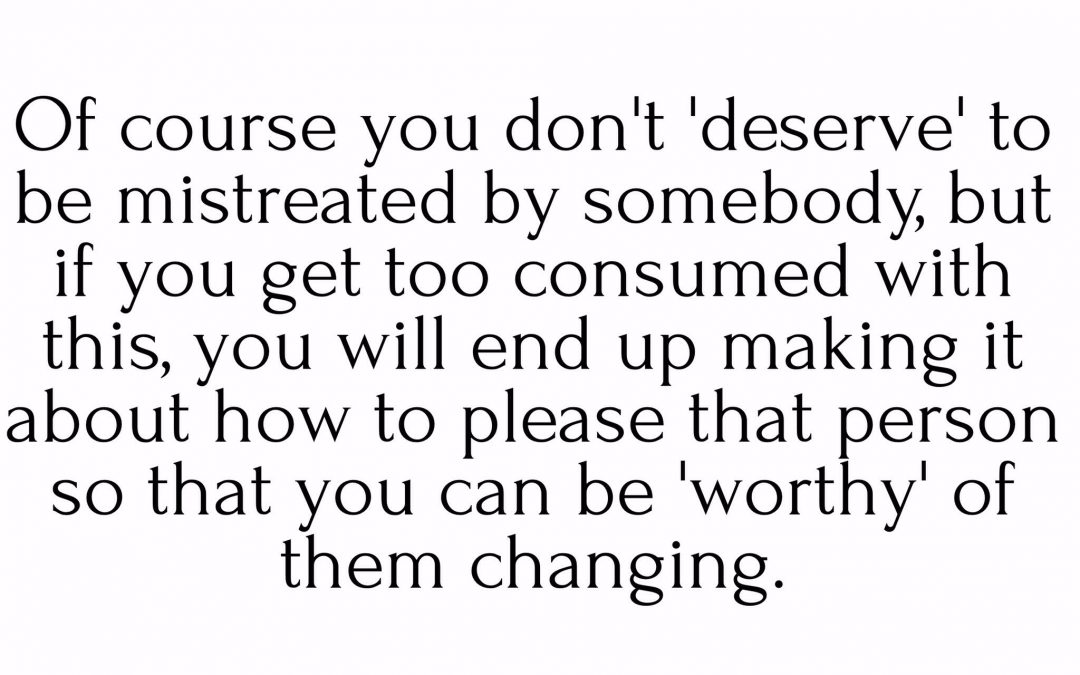 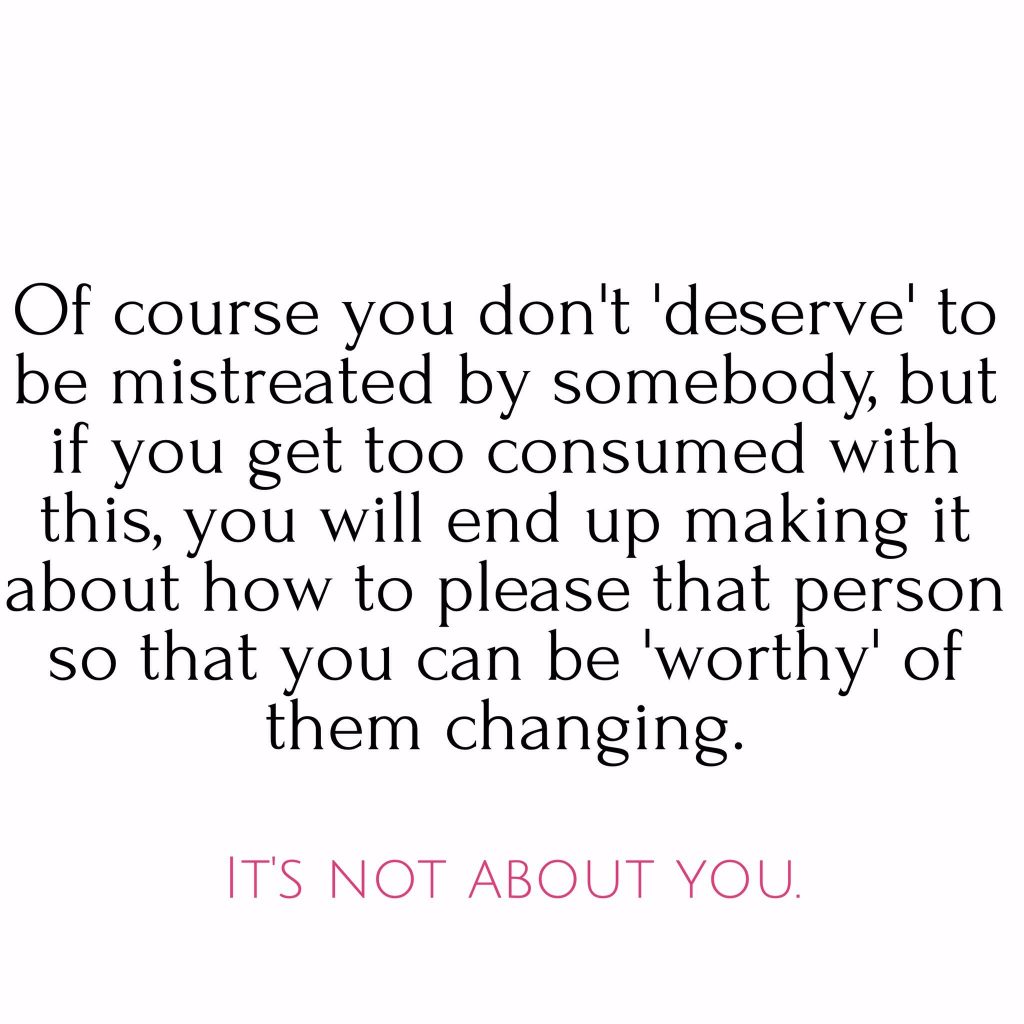 “I didn’t deserve to be treated this way”, Rita explained when I asked what it was that kept her hung up on her ex. I met Rita at an event and her friend, a BR reader, urged her to tell me her story of a five-year back and forth with a Mr Unavailable.

“Did he tell you that you deserved to be treated that way?”, I asked, with ‘that’ being the blowing hot and cold, the saying one thing, doing another, and a catalogue of commitment related letdowns that culminated in him bailing two days after he proposed to her in an effort to win her back, again.

“Well, no, he didn’t. Quite the opposite. He kept telling me how I deserve better”, and she shared how he’d effectively tried to warn her off him…and then chased whenever she [temporarily] took him at his word.

There was a long pause and a myriad of emotions crossed her face, and then she whispered, “Me.”

It’s important to know what we deserve, such as love, care, trust, and respect, and it’s important for us to also recognise where this falls short in certain relationships, but it’s critical that we don’t confuse our sense of what we deserve with what I talked about a couple of weeks ago – feeling entitled to something. When we act this way and our expectations aren’t met, we adopt a bailiff mentality of trying to collect a debt or blame our inadequacies for why we don’t have the ability to sufficiently influence and control the feelings and behaviour of others.

Rita, like many including me, has been beating herself up over what she did or didn’t do to deserve somebody’s behaviour, but when it all came down to it, she was the one who was telling her that it was about her deserving a better version of him than existed and that ultimately, she had been a good girlfriend, so why was he still a Mr Unavailable? She’s been in torment over whether she ‘deserved’ his treatment when actually, that has nothing to do with the issue. It is her who has made it about this and as a result, she’s ended up adding on even more pain and of course missing the wood for the trees.

It also means that she is assuming that his issues were about not having met the ‘right’ woman, not about his personal habits and issues that contribute to whether he can be vulnerable and committed.

It is this tendency that we have to try to influence and control the feelings and behaviour of others by being ‘pleasing’, where we run into trouble with the whole sense of what we deserve.

We believe that even if we are a good boyfriend/ girlfriend / partner / spouse / friend / child / sibling / student / worker that we should be spared or certainly limited, from experiencing conflict, criticism, abandonment, rejection, and disappointment.

We believe that even if it’s not a person’s inclination, character, or desire to do so, that because we are a good or even great ________, that we deserve what we expect from that person, hence when someone doesn’t behave as we’d need, like, or expect, we question where we went wrong in our ‘goodness’ and pleasing in an effort to try to make sense of their behaviour.

We search around for a reason that ‘makes sense’ to us and if our default habit is to already use a reason that stems from us not being “good enough”, this is where we’ll circle back to.

By making other people’s behaviour about us though and languishing on this sense that we’ve been shortchanged, we are answering the question of why another person acted as they did with the answer of our worthiness. That doesn’t make sense.

What we deserve is not the same as who someone is.

When I asked Rita what her chief reason for feeling that she deserved his commitment, she wryly admitted that it was because she’d “put up with so much crap from him for such a long time.”

Of course Rita deserves better than a relationship where she can’t have any needs for fear of giving him another reason to feel “suffocated” by the commitment that he’s not even doing…. but she’s not entitled to continue pursuing that from him. She also needs to re-evaluate her idea of being a “good girlfriend”.

There’s no point in valuing your rep of being a stellar girlfriend (or boyfriend) in a non-mutual relationship.

If you know what you deserve, give that to you by opting out, and focus on being in relationships where it is mutual, not where you’re trying to provoke a person into spontaneously combusting into someone else due to you behaving in what you feel is a pleasing and deserving manner.

Of course we deserve love (when it’s that kind of relationship), care, trust, and respect as a basic within our interpersonal relationships but let’s not mistake that for carte blanche to bust ourselves up trying to make someone be or do what they don’t want or have the capacity to, nor should we blame ourselves for not being able to make us the exception to the rule.

As long as we make other people’s treatment of us about what we deserve, we forget to accept who they are as well as the reality of the situation. We make ourselves superhuman and we break ourselves on the lie that the whole world is operating off of this constant scorecard of who is provoking what with their worth. At the end of the day, being deserving is about showing qualities worthy of [whatever we’ve set our sights on] but if people don’t appreciate and value these in us, it doesn’t mean that those qualities don’t exist or aren’t good enough. It means that they don’t recognise, understand, or even truly feel deserving of whatever you’re trying to give.

Ultimately, you cannot be available for someone who will appreciate and value you, if you’re making yourself available to someone who doesn’t and even basing your self-esteem on your ability to mind-bend people. You do indeed deserve better and it starts by not selling you short.

When You’re Afraid of Abandonment But You Also Choose People That Are Unlikely To Stay
Are negative associations undermining your post-breakup and No Contact efforts?
Being passive and a pleaser can make you a sitting duck for unavailable relationships