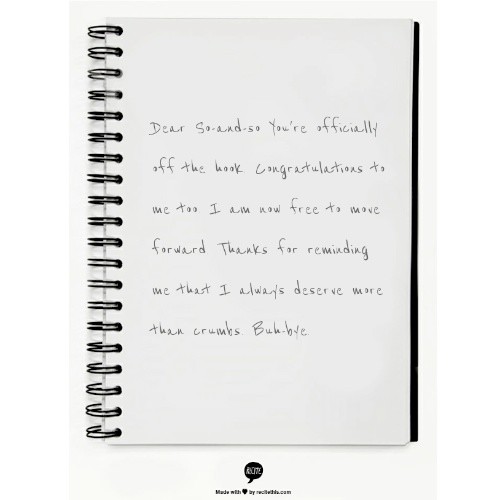 Being let off the hook is about being released out of what could be an unpleasant or at the very least difficult situation, or being released out of something that we don’t want to do. When we feel that we or someone is on the hook for something, it’s fundamentally tied to a sense of obligation, after all, if we didn’t feel that we or they were duty bound to do something, we’d opt out without fanfare. The decision to step away wouldn’t be laden with such turbulent emotions and even a fear of appearing forgiving.

Two scenarios in life are likely to hold on tight to the negativity even if it’s near killing us to do so:

#1 We do something that affects us in such a major way that we feel that it’s too big to let go. We feel so angry and even ashamed about where we feel that we’ve erred that we relive it and critique ourselves for it as often as needed, just in case we forget and eff up all over again. Our inner critic berates and punishes us under the misguided impression that we will be prevented from whatever it fears for us. It then becomes that we won’t be self-compassionate and forgive ourselves because we think that we’re taking the easy way out. We feel that we haven’t served a long enough sentence.

#2 Somebody burns us and we feel so angry, hurt, and sad, that it becomes our purpose and security blanket. We either chase them for their remorse debt like a bailiff or we make it our vocation to change this person or to prove ourselves worthy of their better selves because not doing so has us afraid that 1) we’ll look like a fool and that 2) we’ll be making life too easy for them. We then feel obliged to pursue this person for what we feel is a suitable response because otherwise, we then feel that we’ve failed in our obligation to ourselves. Unfortunately, trying to make sure that they stay on the hook can cost us our dignity because we often end up saying and doing things that we later come to regard as at best embarrassing and at worst, humiliating.

We forget that while we could try to get them to say or do certain things to help us feel better, how we feel about this situation is in our command. I’m not suggesting that remorse doesn’t help and I think most of us have felt a brief satisfaction from seeing someone who has wronged us squirm, but ultimately a lot of improving the way that we feel and releasing ourselves from the anger, hurt and sadness is about what we think and tell ourselves.

If we tell ourselves that we’re not worth a damn or that we’re a fool or whatever, that is about our response.

The reality is that whether we let ourselves down or others do, the human response is to experience a myriad of emotions and to experience what may be self-defeating thoughts. No one is capable of being confident and happy all of the time and as humans, we all struggle on some level with criticism, conflict, disappointment, and rejection. What takes these aspects of life to a new level though, is when we drag it out and persecute ourselves.

It feels as if somebody has to pay for it. When it’s us, our belief system tells us that when you eff up, that makes us faulty, an eff up, and a failure. We may have grown up believing that making mistakes is “bad”, or reasoning that other people’s behaviour was a reflection of our inadequacies.

When we feel that the other party has to pay for it, often it’s because we feel so bad that the last thing that we want to be feeling is that they’re skipping through the happy meadow of life without a care in the world. We take it very personally if for instance, the other party appears to have moved on or isn’t as bothered as we would like them to be. “Hold up a feckin’ second here!”, we think. “I’m a feckin’ wreck. I can’t eat, I can’t sleep, and when I tried to go on a date, I sobbed into my food at the dinner table and made a holy show of myself! They’re posting pictures of themselves on Facebook swinging out of their new guy/girl! This is so unfair!”

This feels even worse if the other party was shady. We wonder how they can be a complete ratbag and here we are being our decent and loving selves, alone / hurting / miserable.

In recognising this, it’s understandable to give over some energy to raking over what happened and thinking about what we or they coulda/woulda/shoulda done but the pain really kicks in when we get hooked on this sense of obligation.

We are not obliged to punish ourselves to the end of time. I hear from people who due to a bad romance, a mistake or what they perceive as a failure, they’ve been serving a sentence for years. There are people committing serious crimes who do less time than what some of us sentence ourselves to for what we feel are our flaws, faults, and f*ck ups.

Is it fair and reasonable to base our self-esteem and whether we feel we have the right to move on and live, on a rejection or disappointment? Is it fair to keep ourselves on the hook because of our past response to something?

We also don’t own people nor are we their judge, jury, or a higher power that decides their fate. Is it worth it to keep a foothold in someone’s life while holding onto anger, blame etc, just to ensure that they’ve been suitably punished?

When we obsess over keeping people on the hook, we keep ourselves on the hook too.

We cannot control the uncontrollable so short of trying to influence and control their feelings by force (boundary busting alert), the person who really ends up being held prisoner by what happened, is us. That, and in recognising that letting someone off the hook is about releasing them out of something that they don’t want to do, why the hell do we want to hang around trying to forcefeed decency or a better perception of us on someone?

Letting go doesn’t mean that you’ve forgotten about the lesson you learned; it can mean that you’re finally ready to apply the insights you gained in a positive manner so that you can move forward. It can simply mean that you accept that you’re human, that you err, and that you’re ready to forgive you. When you genuinely feel bad about something and have been willing to have an honest conversation with you that allows awareness and compassion into the equation, it’s not that you will never err again (human alert) but you won’t be going down that same path again.

There are people who let themselves off the hook because they lack the empathy to actually consider another person’s feelings or to have an honest account of themselves. Some quite simply keep jabbing The Reset Button until they’ve distanced themselves as far away from reality as possible. You trying to keep them on the hook won’t change the fact that they lack empathy and/or that they’re deluded and avoidant. By the time they’re finished with the mind effery or pulling a Houdini, you will put you on the hook for their behaviour. Own your own and let others own theirs.

If you’re worried that you’re letting you off the hook too soon, you only need to worry about this if you’re repeating the pattern but you need to change the meaning of what keeping you on the hook means. You are under obligation to take care of you – where else is your self-esteem going to come from? – but instead of making it about an obligation to punish you, what you need to ensure is that when you move forward, you move forward with awareness. When we touch the surface and then bury our heads in blame or even fantasy, it’s only a matter of time before we slip into old ways and that’s when we become super frustrated with ourselves and end up berating us for having the past on repeat.

Sometimes we’re so busy persecuting ourselves over a situation that didn’t go as we hoped or expected, that we don’t see the bigger picture of how that door closing paves the way to another opening. But we have to allow that door to close first. Let the latch off the hook.

We don't need to 'confess' our bad relationship experiences to a new partner
Wake Up & Communicate: The Marriage Issue
Podcast Ep. 178: Give Yourself Permission To Feel and Express Anger