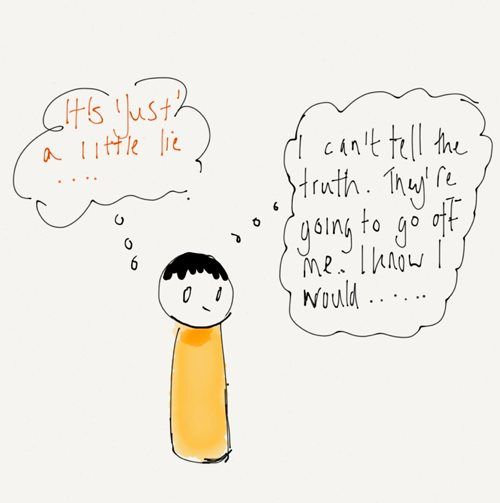 In the early days with ‘the boyf’ (Haven’t called him that for ages! We’ve been married a year now!), he asked me a couple of questions, where I admit for what was a few seconds, I felt the “Oh here we frigging go!” and there was a moment where I was tempted to lie or ‘dilute’ so that I could preserve this ‘image’ of myself. It’s that honeymoon thing where you’re under the misguided impression that they think you’re ‘perfect’ and that you just fell out of the sky with no past.

I would have been living a lie though and I knew that if I lied that I was on a self-sabotage path. Instead I told him the truth because I was no longer judging me. I am who I am, f*ck ups and all, and fact is, by lying I would have assumed that he was perfect and it was just me who was a flawed human being. If the truth was going to cost me the relationship, we weren’t supposed to be together. That and lying would also have been judging him to be similar to some of my exes. He didn’t deserve that.

Lying is a form of judgement against the recipient and sometimes, if we’re inclined to be self-critical, we are also judging ourselves.

Sure some people do lie because they’re honesty intolerant like the way some people are with dairy and wheat, but plenty of people misrepresent aspects of themselves because, when we’re around those we really want to impress and fit in with, we depend on their validation. When they ask us something about which we already judge ourselves, in an effort to delay what we believe to be the outcome of truth (not fitting in, being judged in some way) and in responding to panic, we tell a lie that we’ll later come to regret.

Whether it feels like a big lie or a ‘little’ ‘ineffectual’ lie, we decide in that moment that:

1) It’s not in our best interests to tell the truth.
2) The other person cannot handle the truth or ‘shouldn’t’ know it.

3) They don’t deserve the truth.

Regardless of the size of the lie (which is subjective anyway) and for however long that the lie prevails, we make a judgement about that person.

It can even extend to: I’m only telling this lie until they’ve had a chance to get to know me / fall in love with me.

Someone who is cheating on a partner is hardly going to tell us the warts and all truth of the involvement because they judge that we’ll either tell ’em to jog on or they judge that we will be OK with the lie or at the very least we’re malleable.

We project our own perception of ourselves onto them or we project a negative reaction or situation that we associate with someone else (possibly ourselves) and determine that this person will behave in the same way. Or we simply deduce that if we tell the truth, it will take us out of the running for whatever it is that we want further down the line or right now.

At the time when the lie is told, it feels like ‘one little lie’ especially if after telling the lie, we feel like we’re being otherwise truthful. Unfortunately, every day or certainly every opportunity that goes by for the truth to be told, is another lie told. It might still be the same lie but it’s reinforced several or many times. This is very upsetting for the other party who will feel that there were opportunities for it to be corrected.

We may lie because in not knowing a person, we don’t feel confident about how they will react but that’s an insufficient explanation for why the lie prevails. Of course then we get to know the person too well to tell the truth as the loss seems bigger than at the outset.

I’ve heard from people who are lying about (or have dealt with someone who has lied about) their age (claiming that they’re younger or older than they are), the existence of children, the number of children, having been married before, still being married, pretending that they don’t have family or friends (yes really), claiming someone had died when they hadn’t, claiming to be seriously ill, and pretending that their divorce has gone through while planning another wedding.

If you’ve lied to someone about something that basically amounts to misrepresentation, unless you lack a conscience and empathy, you’re likely aware of the personal toll of living a lie – it’s just not good for your sense of self.

Whether you got caught out or eventually admitted to it, you’re also likely aware of how badly a person can take being lied to, even if you didn’t have shady intentions – sometimes we feel ‘better’ about the lie because we’re not lying to gain an apparent advantage per se ; we’re lying because we’re so afraid of being ‘us’ and what that means.

Unfortunately we all have associations with everything. I say “fish”, you might say “chips” and a person hears “lie” and might associate it with various negative experiences. They lose confidence in you and it can take some time to recover the trust.

It’s also safe to say that someone who’s mistreating you will take your lie and use it as a blanket justification for subsequent or even previous treatment, as if, “I knew there must be a good reason why I was mistreating you! My goodness! My shady spidey senses must have known you were lying.” No they didn’t!

If you’re misrepresenting yourself to someone whom you want to forge a relationship with romantic or otherwise, you’re setting you up for pain. Without trust there’s no relationship. It can also force a person to ponder what else you’ve been lying about.

You have to question whether this lie is worth it.

Is it worth the anxiety? Is it worth what may amount to holding a person under false pretenses? How would you feel? Is the lie an accurate representation of your character?

It’s easy to say that the lie is ‘small’ but it may be big in the other person’s eyes, simply because they realise that you don’t trust them and believe that you perceive them in a particular way.

Most people who I’ve spoken to in these circumstances got themselves into a pickle out of panic. They don’t go around lying to people all of the time and regret taking a detour from who they are due to embarrassment or even shame about an aspect of their lives.

The only way out of this situation is through it – the sooner you tell the truth, the better. Be honest about why you lied – both with them and with you.

Lies are like comb-over’s – an attempt at disguising the truth where you may fool some but you’ll always be fooling yourself. A relationship built on mutual respect, care, trust and eventually love has no place for misrepresentation.

Shifting from blame to taking responsibility for you
Listening to myself - time for a summer break!
We must stop caring too much for those who care too little for us
Share this...