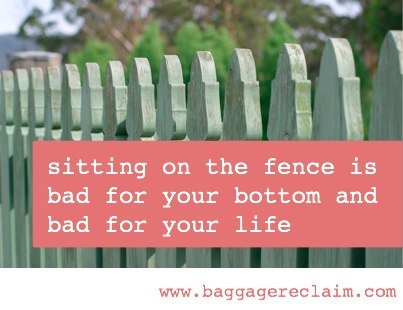 When you feel like you have little or no choices, it’s because your mentality paints you into a corner where it’s not that you don’t have any options, but that you either don’t like the options that you’re faced with (you don’t feel that you have the choices that you’d prefer), or because you don’t believe in your own capabilities.

We perceive our choices in terms of the limitations we think that we have.

The more limitations we believe we have, the less choices we perceive ourselves to have access to and in fact, the less opportunities we think we’re going to face in the future.

If you think you have ‘flaws’ (don’t we all but lots of people seem to think that being human is a barrier to choice) and that in your eyes it means you can’t be X or do Y and that certain people aren’t going to be interested in you, you’ve just shrunk your options. If you respond to your perceived limits by being with people that reflect your them, you’ll exclude available options and opt yourself into the unavailable dating pool. Next thing, all of your options ‘look’ unavailable.

We can practically prophesise doom for ourselves. Then, because we’re feeling low, we’re saying that we need to stay in the job we’re in even though it’s draining our soul because we think that we’re too old to change or that it would be too hard to get a new qualification or to apply in that field or that there are no jobs out there, end of. Or, we’re saying that a relationship that we’re very unhappy in is ‘as good as it gets’. We already felt that our choices were limited when we got into the relationship; when we look to the future, we think we’ll have even less opportunities than we think we have right now to be in a better relationship so we decide that we’ll continue to invest in our ‘only’ option.

Many people who avoid making decisions do so because they keep thinking about the future and trying to ‘protect’ it by avoiding making decisions or even dodge admitting mistakes for fear of limiting choices in a future that will eventually become the present, which of course they’ll dodge then when it comes around.

Often when faced with having to make a choice, it’s deciding between choosing the path of least resistance (your uncomfortable comfort zone) and change. When you paint yourself into a corner and say that you have no choices or that your only choice is to remain in an uncomfortable comfort zone or pretend you’re making a choice that’s actually a variation of your comfort zone, you’re painting yourself into a corner and removing your options, and a person who doesn’t feel that they have any options is not a happy person. You’re certainly not going to feel like you’re living the life you’re choosing to be in.

Of course it’s also important to remember that not making a choice is a choice in itself.

It’s not about thinking that you have endless options (there are people out there for instance, who treat dating, particularly online dating, like cruising through a people supermarket with a never-ending supply) and that you never have to choose like the commitment resisting and decision dodging amongst us, but removing your options puts you in No Man’s Land. You leave yourself with nowhere to go and as anyone can tell you who has ever sat on the fence of their own life or someone else’s life, that’s a pretty damn uncomfortable place to be in.

You’ll know that there is a BS (bullsh*t) and self-esteem issue when no matter what options are suggested or that you come across, you have an ‘objection’ that essentially keeps you in the same position. “But…. But…. But….” You then feel powerless even though you actually have power. You may even feel hard done by. I have people who are in their 30s, 40s, 50s tell me that they have no choices when it comes to relationships and then I have people in the same age groups tell me or show me that they have choices. What’s the difference? Perspective. Choice. How they feel about themselves, love, and relationships.

When you perceive yourself to have choices even if making some of those choices would mean getting uncomfortable but would ultimately lead to a better position, you’re giving yourself options and helping your self-esteem.

It means having to look beyond the short-term by making decisions that help put you on the path of living your life authentically by respecting your own values and endeavouring to treat you with love, care, trust, and respect each day.

While there are many choices we can make with a ‘goal’ in mind, the choice to treat you well and to keep trying at it doesn’t have a goal or destination in mind – it’s just what you have to do and when you feel consistently good off your own steam, other good things start to happen and your confidence builds, as do your options.

If you keep running you down and telling yourself things that seal off your options it leaves you with no room for a positive outcome and of course that’s only going to remove your hope, which in turn drags down your confidence, which in turn will have you questioning your worth – yep, that’s your self-esteem sliding.

Saying that you have little or no choices is like saying you have little or no power in your own life. If you’re going to, for instance, stay in a relationship, do it because you want to and it’s the positive choice to do so, not because you’re scared of what you might be and do outside of the relationship under your own steam. The funny thing is that when you put some concerted andcontinued effort into truly getting to know and like you, what you do under your own steam can only get better and better.

Reclaim You: 100 Tips For Dating With Your Self-Esteem In Tow
Knowing When To Fold: Bad Investments in Relationships & Seeing The Bigger Picture
Passive Aggression in Relationships - Part 3