A Tale of Two Commitment Resistant Birds – Are you hiding your commitment fears behind someone else’s more obvious commitment issues? 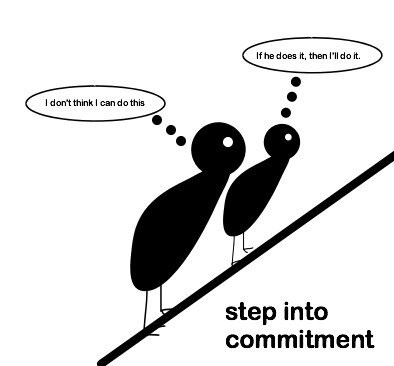 Now imagine a commitment resistant bird – pushing them for commitment is like taking them to the edge of the cliff and asking them to take off and fly with you and them refusing just as you’re about to take off, or making sure you get nowhere near the cliff’s edge by obstructing you along the way.

You know that they’re not as ‘flight worthy’ (commitment able) as you would like and that you could have chosen to be with a bird that actually had flying capabilities and desires, but because of your beliefs about yourself, love, and relationships, you decided that you wanted a bird that would make you the exception to their rule of being a commitment resistant bird. You may also have been worried that if you had chosen a more flight worthy bird, they would have noticed the flaws that you believe you have and that you wouldn’t have taken flight anyway.

Instead of putting your energies into working at a relationship with an ‘able bodied’ bird so that any ‘investment’ you’re making is into the progressing of a healthy relationship, you instead invest in a bird with limited capacity which generates limited results, but if it pays off, which is an enormous, dangerous gamble, you will feel a huge personal sense of validation and believe that you’re loveable and worthy because someone who was a commitment dodger was willing to commit to you.

You could seek commitment with birds that have a likelier prospect of giving you a relationship but instead, you want this bird to love, commit to you and change – love against the odds.

When they think about taking off and flying with you, they worry that they might not be up to the job, that you might expect things from them in the flight that they don’t think they’re capable of, that there were other birds that they didn’t want to rule out, that taking flight into the unknown, even if it’s with you is too scary, or even that they might not be able to rely on you because they recognise your own limitations. In fact, they may have decided a long time ago, that they don’t want to fly with anyone.

Each time they stall on flying, they get you to take a step back from the cliff to take some more time, get their lives sorted, ‘think about things’ or whatever the hell it is. Because you spend a lot of time trying to show them the ropes and explain what it would be like when you take flight and preparing for life after launching, the last thing you want to do is jack in all of your hard work. Or at least it feels like hard work because you’re trying so hard with them, but it’s important to remind yourself that it’s working at something with a limited capacity as opposed to putting yourself out there with a real prospect of ‘flying’.

Truth be told actually, deep down, you’re really scared of flying and part of the reason why this relationship is so attractive is that you can spend a lot of your energy on trying to get to the point of flying but not actually fly, which would be really scary. Of course this is forgotten when you’re focusing on their inability to fly.

You look for a sign that they’re ready and even if you don’t get one, you might push them to take that walk to the cliffs edge and take flight.

You’ll feel bewildered because it’ll seem like you’re so good together, fluttering around, hanging out, making sweet love (or maybe not so sweet) and enjoying the good times. But each time it feels like you’re going somewhere in the direction of that cliff, something seems to happen to slow you both down and derail your progress.

If they were nodding in agreement along the way, you’d think your relationship was progressing and then you’d get right to the edge and prime up for the leap moment, only for them to suddenly pull back just as you’re about to jump.

To be honest, the whole time you were making the journey to the edge, you were never entirely convinced that they were going to fly and even when you did try and believe it, you were filled with terror at the thought of it actually happening.

Still, like you always do, you imagine the two of you taking that flight and imagine various scenarios and plans – they just don’t come to fruition.

For others, the moment they felt like you were trying to take them to the cliffs edge, they were resisting you or even saying outright that they wanted out. They’re throwing up obstacles, disappearing on you, causing arguments, and maybe even trying it on with or sleeping with other birds.

Still, you hang in there and periodically, you try to get them to commit.

If you’ve ever been involved with someone who can’t or won’t commit, your relationship is like repeated failed trips to the cliffs edge.

If you’re still there, you’re believing that if you just do the right things and not act too needy, or give them more time, or lay down an ultimatum, or flirt with another bird, or whatever, that eventually, they will take the leap with you.

On some level, you recognise that your wings are not working as effectively as they should be, but you may be thinking that when their wings fix up and look sharp, your wings will too. You may also be empathising and sympathising thinking that because your ability to fly has some issues and theirs does too, that you’re in it together and understand one another.

When you think about ending the relationship and moving on, you imagine that ‘some other bird’ is going to come along, start a relationship with your flip flapping, commitment resistant bird, and in two shakes of a lambs tail, they’ll be taking off and flying with them over the cliff. You’ve seen it before with your ex’s or your friends, and the thought of it happening fills you with dread. So you hang in there. Eventually after one too many trips to the cliffs edge and maybe even an aborted flight or two with crash landings, you decide that enough is enough. You try to get over them and contemplate your life without them but are still scared that you ‘missed’ a trick and some other bird will come along and reap the benefits of all your hard work.

In recognising their limitations, we want them to open up and change. We want to fix their broken wings.

We want them to learn the lessons we think they should from our investment into the relationship so that we can reap the benefit. If you’re the type that wants to get back together with your ex or gets nostalgic, you may have garnered insights into your own behaviour and now want the opportunity to learn your lessons in the old relationship instead of moving on with your new found knowledge and seeking a better relationship.

Do you know what all of this stuff is about? Seeking validation. From not wanting them to be with someone else if they’re going to change, to wanting them to learn their lessons and change, to wanting to learn your lessons and getting the chance to try out your new knowledge on them – it’s all about seeking validation. Be very careful of trying to be right at the expense of your dignity and self-esteem and be very careful of being unwilling to fold on bad emotional investments and dedicating your life to walking back and forth to the commitment cliff’s edge.

But more importantly – if you are involved with someone who is commitment resistant, you need to examine your own capacity to commit and ask yourself: Why, if I genuinely want love, care, trust, and respect within a committed relationship, am I investing myself in someone who during my experience of being with them is not capable of it?

As I’ve explained to many a person who has been involved with a commitment resistant person, we kid ourselves into believing that we’re doing everything in our power to make our relationship work, but by creating self-fulfilling prophecies by choosing people with limited capacity that generate limited relationships, this is not the same as actually putting your efforts into a relationship with actual prospects.

Where you find one commitment resistant person, you will find another hiding behind them.

Your thoughts? Have you been hiding behind someone else’s inability to commit?

Check out my ebook on the the No Contact Rule which stresses the important of cutting contact with your ex, plus my ebook on emotionally unavailable men and the women that love them, Mr Unavailable & The Fallback Girland more in my bookshop.