Advice Wednesday: Help! I’m a doormat to my best friend 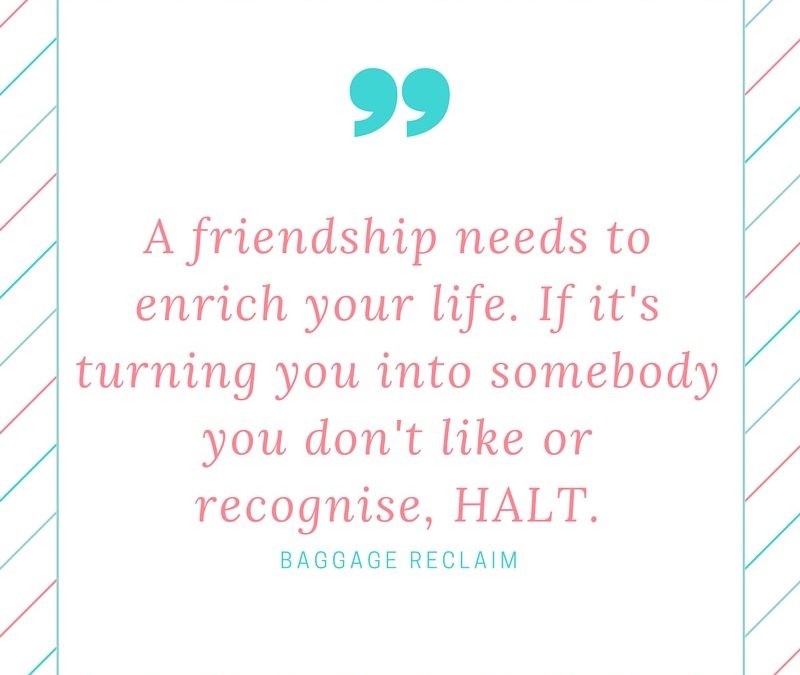 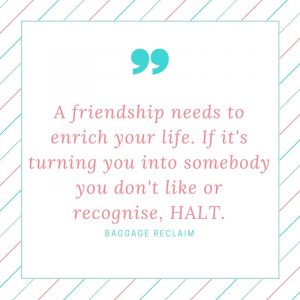 Debbie says: At the age of 49 I still have a problem of being a doormat to my best friend. I don’t know how to raise my self-esteem so I don’t have to depend on her approval.

I read one of my diaries from my teens last year and one of the things that stood out to me, aside from the self-loathing and utter confusion I vented, was the fragility of some of my friendships—it is quite scary how we will go out of our way to gain approval or stay on side with people who we don’t actually like very much, or even if we do like them somewhat, we exaggerate their ‘specialness’ by treating them as if they’re the source of our worth and happiness.

Many of us imagine that when we reach adulthood, we won’t have to deal with peer pressure about which ‘base’ is OK for us to go to and that friendship will be easier because, well, you know—we’re adults. In truth, friendship can prove to be testing on our emotions even when we’re pretty seasoned at life and this will be further exacerbated if we have been friends with someone for a long time. We often outgrow certain friendships that may have been established at a time when we were, let’s say, less choosy about who we let into our Circle of Trust.

Debbie’s friendship is established on a rather toxic premise—that she ‘must’ play the role of the one who her best friend walks all over. That imbalance represents one person feeling inferior and the other, whether it’s consciously or not, operating from a position of authority. By extension of this, it means that it’s not an actual friendship because that’s defined by it being a mutual relationship between friends.

Playing doormat in any relationship is one of those activities where you end up effectively ‘eating’ yourself because every step taken towards blowing smoke up the other person’s bottom and pumping them up, is really an act of war against the self that gradually erodes your self-esteem.

Debbie wants to raise her self-esteem but unfortunately people pleasing and self-esteem are mutually exclusive.

These relationships are also draining so while on one level, she might recognise that this is a rather unpleasant arrangement, this involvement has robbed her of her strength to leave. I think sometimes in these situations, you also wonder who you would be if you didn’t have the ‘purpose’ of being this person’s ‘friend’ and the one they take their stuff out on. Her lack of self-esteem means that she finds ‘unusual’ ways to feel special. Some of us do it by making out as if we’re the cause of everything that doesn’t go right in our lives or that we’re the exception, or, like in Debbie’s case, that we’re special because we have that role of ‘best friend’ or partner to someone who brings out the pleaser in us and has us yapping at their heels. We fear that if we walk away, that we’ll have our hot seat taken by somebody who might bring out a better version of this person.

I hope that Debbie is reading this:

You (Debbie) if you want what must be this horrible discomfort to end and for you to feel like the worthwhile and valuable person you already are,  must recognise that  this is not a friendship and you’re doing you both a disservice by being a doormat.

This relationship must surely be full of resentment—you for feeling like the looked-down-upon-not-good-enough friend who is being ‘rescued’ by having this person bestow their friendship, and her resenting you for continuing to be ‘nice’ in spite of the way she acts. She will feel guilty and then take that out on you and you continue to be nice so the cycle continues. Each of you needs to own your own part.

This is a good time to reflect upon what your motivations are. Are you still trying to appeal to the bully from childhood? Are you still looking to right the wrongs of the past and earn the ultimate validation, because you know what? If you were bullied or felt rejected by someone who you thought was your friend or who you thought ‘should’ be your friend because you hadn’t done them anything, it’s time to stop blaming your younger self. It’s time to stop telling that much younger part of you that if you don’t have this friend, that you’re “nothing” or that she’ll make your life difficult. Start telling the truth.

Fact is Debbie, she needs you more than you need her and on top of this, her behaviour isn’t a sign of strength and purpose but of fear and yes, even weakness. She relies on taking people down (or you doing it) in order to feel big.

Self-esteem is not a destination. It’s not a goal that you reach with ‘one move’; it’s the sum of how you treat and regard you each day.

I’m not saying that you need to sack off your friendship but if you want this friendship to continue but you also intend on having self-esteem, you’re going to have to stop complying—that’s complying with your own inner noise about obligation (these are faux obligations) but also complying with your ‘role’. Not playing your ‘part’ will be uncomfortable initially and you might fear being abandoned, but the truth is, you have been abandoning you for the duration of this friendship and it’s holding you back. Your friendship has either run its course or its due for a long-overdue change but whichever way you look at it, it’s time for you to be you in and out of this friendship. If she’s going to end your friendship because you won’t be a doormat, as I would say to my own daughters, she wasn’t your true friend anyway. It’s better to ‘play’ on your own and forge new friendships than to hold on to somebody who doesn’t treat you with the love, care, trust and respect that you deserve. Raising self-esteem comes about with self-esteem driven behaviour and that often comes down to being more choosy about the company that you keep.

Have you had experience of a friendship where it seems to be reliant on you being a doormat? Or have you been the one in the more dominant role? What advice do you have for Debiie?

Each Wednesday, I help a reader to solve a dilemma. To submit a question, please email advicewednesdayAT baggagereclaim.com. If you would prefer your question to be featured on the podcast, drop a line to podcast AT baggagereclaim.com. Keep questions below 200 words. For in-depth support, book at a clarity session or coaching.

12 Core Boundaries To Live By in Life, Dating, & Relationships
When You Feel Under Pressure From Family To 'Forget' a Drama Just In Time For The Holidays
Brain Training For Relationships