Do I Have A Sign On My Forehead Or Something? NO, It’s The Time Of Day Principle 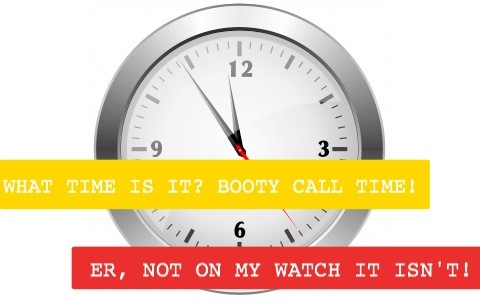 You bump into your ex that you haven’t seen or spoken to for a while. You’ve spent months moving on with your life and are just getting to a place where you’re feeling good about you, are considering dating, and are even feeling confident enough to hang out with them and chat for a while. When you get home, you’re still on a high from feeling like you ‘aced’ one of life’s tests and then you notice a text on your phone. “Hey… Was great hanging out tonight. I’ve missed you. How about I come round later?”

Your heart sinks and then quickly lifts with outrage. “Do they think I’m that easy?” You either ignore the text or decline their invitation, but you still end up ruminating on whether you really have made any progress over the past few months and what you said or did to ‘make’ them think that you might sleep with them. In some versions of this story that I’ve heard time and time again, the text is taken as a sign that 1) they haven’t moved on as much as they thought and 2) that it means that they’re destined to be together, hence they end up shagging.

It’s easy when you’re inclined to engage in the type of introspection that yields a self-blame perspective, to wonder if you have a sign on your forehead or are incredibly unlucky, or are essentially communicating the ‘truth’ about yourself without you realising. You might be like how I used to be and believe that you’re having an extended run of bad luck, but what you need to realise is that often, people are chancing their arm by working off The Time Of Day Principle.

Very simply, if you’re giving them the time of day, they assume that there is a possibility that they can be and do certain things. That is literally it. That time of day can simply be catching their eye or entering into a conversation. It could even be giving them directions! While it can be taking an interest in their conversation, not minding when they’re OTT intense and forward, not being turned off by their flirtatiousness in spite of the wedding ring, or other more obvious things, don’t get things twisted – it starts off as the time of day.

If they’re particularly arrogant, they may immediately make assumptions about you and draw misguided conclusions, which incidentally aren’t facts, but if they do manage to get more ‘airtime’ with you, all they’ll do is find reasons no matter how straw-like they are, to justify their actions.

The important thing to remember, is that they have the disposition to be and do whatever it is irrespective of your presence. Whatever they do next is not an indication of your worth as a person – it’s just representative of their own thinking, actions, character and values.

How do they find out if the initial assumption is correct? They chance their arm, which actually may be as natural as breathing to them, so it may not always be a premeditated, well thought out plan that they’re cooking up. It’s more likely that they’re in the moment, being reactive and running off their instincts.

When you chance your arm at something, it’s basically taking a risk and if it pays off, you’re quids in and if it doesn’t, then you know where you stand and there’s no real loss. The type of person who does this in dating and relationships, can also sometimes be like a persistent battering ram that loves a challenge – they may try again but aiming lower via a charm offensive, to see if you’re ‘really’ who you are. Or they’ll just move on to someone else.

If they already know you, like the ex in the example at the start, what you must remember is that they are not working on knowledge of you now; they’re working on assumptions based on what they know of you from previous situations and your pattern of involvement. They’re not wired up to some Relationship Air Traffic Control Centre that lets them know when they can home in on you – they only know how you’re actually going to react when you react. Yes you might do what you normally do, but equally you could turn around and tell them to jog on.

Just because they’re making an assumption, it doesn’t mean that you have to agree with it. It’s an assumption – it only looks like a fact to them if you start complying with it, so don’t.

The way not to agree with the action is to do what respects your own boundaries and values, not what you assume that their actions mean about you and then trying to work out what they might be thinking about you. Their actions mean everything about them.

It’s the same with sex on those first few dates – taking a chance alert! If you give the time of day to them trying it on, when actually, you don’t want to get down, it sends the message that sex is a possibility and then they start hustling and ‘negotiating’ by going on a charm offensive or passive aggressively trying to shift things in a sexy direction.

Likewise, you know when you’re doing No Contact and your ex ignores the fact that you clearly don’t want to engage or have even specifically asked for space? It doesn’t mean anything about you – it just means that they’re hard of hearing and don’t respect boundaries. It doesn’t mean that your efforts at NC are wasted because as long as you’re managing your end, the rest will gradually take care of itself. Give them the time of day, they’ll think they can coerce you into responding and that you still love them. And then go on their merry way.

Don’t want to be tapped up for a booty call? Don’t give them the time of day, especially when it’s late at night or last minute.

Don’t give your energy to things, people, and situations that detract from you so that they don’t get the time to make any more assumptions about you. Your actions will show that it’s about that time for them to jog on.

If you want to reduce the time of day you give to shady relationships, check out my books The Dreamer and the Fantasy Relationship and Mr Unavailable and the Fallback Girl which are available from my bookshop.

Are we waiting for a fairy tale happy ending?
Get Out of Stuck! Getting Your Power Back In & Out of Relationships (Part 2)
It's What Comes After The "But…" That Counts