Do You Keep Jumping To Dodgy Conclusions That Leave You Feeling Bad About You? 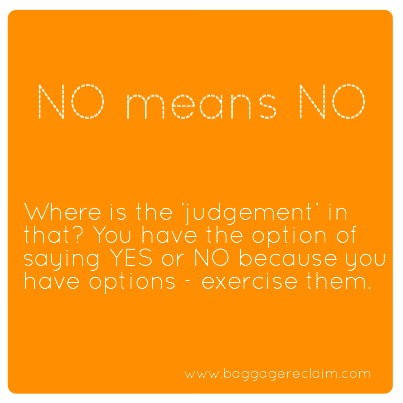 Often, when people tell me stories, while the situations in themselves that they describe may be awful, what can really appall me are the seriously dodgy conclusions that are jumped to. If you have major rumination and panicking sessions about what you think people are thinking/saying about you, or what you think it will mean about you if you do or don’t say or do something, or your default setting is to relate everything back to you as some sort of negative indication, there’s a major processing gap occurring between you receiving ‘feedback’ and the conclusion that actually makes you over-receptive to feedback.

Being an ‘Over-Receiver’ taking stuff to the nth degree with your inverted ego issues ( “It’s about me”) and bad maths (2 + 2 = 52) can be pretty torturous and much of the pain is actually of your own making because it’s like you take it that the meaning you apply is correct even though you haven’t truly given any great deal of consideration to any other possibilities.

This type of jumping to dodgy conclusions malarkey is frighteningly common and the truth is, we can all be guilty at times – a friend and I were talking about how sometimes when people tell you that they need to talk to you about something, you can go into paranoid overdrive and wonder what you may have done to p*ss them off…even when you know you haven’t done anything! It’s that Why? What Have I Done? Paranoia. When they call and it’s to ask you to dinner, or to tell you a secret, or to lament their relationship woes or basically anything that doesn’t involve you having done something wrong, you can end up feeling a tad foolish.

Of course if you have done something that’s another matter, but people who jump to dodgy conclusions tend to think that ‘doing something wrong’ is basically living and breathing. They let their insecurities get the better of them instead of addressing them.

When another friend heard about someone else’s promotion, she was convinced that it was some sort of message about her own position. “They obviously don’t value me if she’s got that job” she fumed and she was firing off her CV to various places and meeting up with recruitment companies while seething over the rejection. She figured she’d better jump before she was pushed. Three weeks later she was pretty damn embarrassed when not only did her boss ask her if there was anything she wanted to talk about because she’d been behaving really oddly, but that if she did still see herself at the company, there was a new promoted role that he’d earmarked for her. She’s starting to recognise that she doesn’t internalise her achievements but also that due to stuff outside work (relationship problems), she’s become increasingly insecure and between measuring herself against colleagues and using what does and doesn’t happen for validation, she’s wearing out her own brain and nearly jeopardised her job.

You’ll know that you’re an Over-Receiver if you’re also an over-empathiser, which is where in the process of thinking that you’re empathising – putting yourself in another person’s shoes to better understand their position – you actually end up putting yourself in their shoes, forgetting all about them, thinking about what you would think, feel, or do in that situation and then deciding that it’s what they’re thinking, feeling and doing.

You are a projector which has got nothing to do with empathy and is actually…bullshitting.

If you struggle to give feedback, which may be as ‘simple’ as saying NO, or asserting your own opinion, or having and maintaining boundaries, you’re also going to have over-receiving issues because it’s the fact that you jump to conclusions about what you saying NO will mean or the consequences of asserting your opinion or boundaries that stops you from giving feedback in the first place. The awful part is that these dodgy conclusions only leave you feeling bad about you while often giving those around you free reign.

Now I get it – saying NO is not easy but neither are a lot of things that we have to do in life but we just go ahead and do them anyway. The truth is, if you have an issue saying NO and you’ve either jumped to the conclusion that you’re mean / nasty / a bad person / stingy / tight / selfish etc., and/or you’ve jumped to the conclusion that the person is going to be terribly affected by you saying NO (or showing no via boundaries), you’re so way off base. I hate to break it to you – you’re just not that powerful.

When someone receives NO, they can always try their luck elsewhere. You have the option of saying YES or NO because you have options. You are not the only person with the power to say YES. You’re not and as many a reader of this blog can attest to, when one person won’t say yes to do something that would bust their boundaries or just isn’t what they want to do, somebody else will.

NO means NO. Where is the judgement in that? I remember when some guys would try to put the pressure on about having sex – when I said NO it’s because I didn’t want to, irrespective of whether they were the best guy on earth or the worst one.

How are you making a judgement about someone by saying NO and having boundaries that you’re supposed to have anyway?

Why do you have to make a judgement about you?

I also guarantee you that they have heard NO before – don’t project your own fear of hearing NO onto them or anoint yourself with powers that are beyond your scope because when you jump to these conclusions, you feel bad as a result of jumping to these conclusions, but if you for instance say YES, you’re going to feel bad about this too!

This means you have to change your thinking by not just running with the conclusion without due process. Slow it down…way down.

Is there any other possible reason why such and such is happening? Have I actually done something identifiably wrong? Are there other people who could be responsible? Am I having a disproportionate response? Am I making something about me that isn’t wholly and solely about me or even nothing to do with me? Am I projecting?

That’s what jumping to dodgy conclusions is – projecting your insecurities onto others and then making it fact. Why do you have to make a judgement about you?

Why does something unfavourable happening mean that you’re not good enough or that you’re X,Y,Z? Couldn’t it mean something else?

Why do you have to take the fall? See my post on the One False Move Mentality.

If the conclusions that you’re forming about you leave you feeling bad and have you doing stuff off the back of them that busts your own boundaries, it’s time to form different conclusions and take different actions because this perspective isn’t working for you.

*Updated 7.30 am GMT – The comments are now open. That’ll teach me to go into the system on my iPad!

"If It Were Me, I'd…." When You're Perplexed By People Not Acting As You Would
Do you understand the dynamics of your relationship?
More Translations: I Will Never Fall in Love Again, I'm Just A Simple Guy & other such sayings