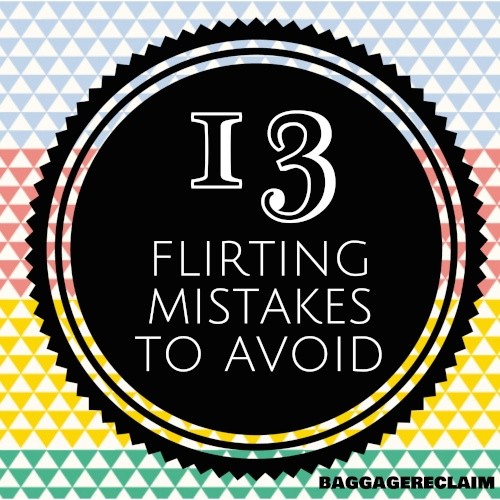 1. Being cheesy
Talking pure doo doo and being able to get away with it is something that very few people are successful at. I don’t deny that cheesy works for some people but more often than not it will backfire on you when you act slicker than an oil slick in Texas. This is one of those acts that is likely to have you being relegated to the ‘not a frickin chance’ category and you will also come across as insincere.

Like being cheesy, when you roll out the big guns and say stuff that leaves the person feeling that you’re being insincere and fake, you kill all chances of going from flirting to dating. Saying things for the sake of it and wheeling out the same old compliments that you do for every person that you approach are likely to be seen through.

3. Invading personal space
I despise when a guy tries to chat me up and is right up in my face, standing far too close, or even, heaven forbid, touching me. Flirting requires boundaries so that you don’t end up in a territory that will kill your chances. As a general rule of thumb, keep your hands to yourself and keep a healthy distance between you and the object of your flirtation. If you can see the hair in their nostrils, down their cleavage, or the colour of their underwear, you’re too close.

4. Stepping too far into the future
Contrary to popular opinion, people aren’t so desperate for a mate and to settle down that it’s a turn-on for you to start talking about your future or talking in the future tense before numbers have been exchanged or you even know the person! This is pretty creepy and it will send the person running in the opposite direction! See my posts on Future Faking and Fast Forwarding!

5. Coming on too strong
There’s that boundaries thing again! People who come on too strong are people that don’t understand body language or who don’t listen to what is being said. Don’t be so blinded by your lust, attraction, or libido that you fail to recognise that you are overstepping the mark. Being too forceful with your flirtation is likely to make the recipient feel nervous and at worst, turned off or even scared.

6. Sending mixed signals & leading someone on
Are you interested, or not? Toying with a person is unfair and can cause him/her to bark up the wrong tree as a result. Whilw it can be difficult to know if you’re interested enough in the person for it to result in a date or more dates, try to be consistent by being for example, a little reserved until you’re sure. Don’t make grandiose promises aka Future Faking. Also, some people thrive on attention from other people as it validates them and gives them an ego boost, but if this results in someone being lead on, you need to take responsibility for your part in it and recognise that there are also destabilised as well as dangerous people who may react badly to your games. Remember that the other person will generally react to the signals that they perceive that you are sending. Whilst some people fail to recognise positive or negative signals and come on strong anyway, play safe and avoid putting you in an awkward and avoidable situation.

7. Leering
The whole eyes on stalks, tongue hanging out your mouth, suggestive leer that strips the person of their clothes with your eyes alone, is a mega turn-off.

8. Going into sexual territory
I don’t care what signals you are getting – mentioning sex or anything sexual as part of a flirtation with someone you hardly know is inappropriate. The only time you can get away with this is if you’re after a one night stand and the other party is too. Being sexual while flirting crosses boundaries and will definitely convey the wrong message about you.

9. Being overfamiliar
If someone tells you that their name is Nicola, don’t shorten it to Nicki a moment later. Likewise, avoid doing anything that is basically your attempt to leapfrog over the formalities and establish yourself without actually getting to know the person. Know your place!

10. Being too specific with a compliment
I wrote about complimenting women recently but as a general rule, try not to home in on anything too specific as you have no idea what people’s insecurities are. Hence you don’t compliment the hourglass figure, the pear shape, the Roman nose, the big ears, big feet, or big breasts. Just tell them that they look great!

11. Keeping an eye on other ‘prey’ in the room
Your focus should be on the person that you’re flirting with and if you’re eyeing other people in the room it sends a distinct message of insincerity, rudeness, and a low attention span.

12. Acting weird or crazy
You might think that it gives you individuality but it is likely to freak out the person and send them running for the hills. Be careful of verbal diarrhoea or coming across highly emotionally strung as it screams hard work and baggage alert.

13. Being argumentative
Some people think that interaction between the sexes is just like when you were in the playground or at high school, where arguing, fighting, or ignoring each other could be perceived as signs of interest. Whilst having a bit of banter can work to a point, be careful of crossing the line into argumentative and difficult because it sends a distinct message that you’re too much to handle and you may potentially come across as aggressive.

Excerpt from Mr Unavailable & the Fallback Girl 2nd edition: He Keeps a Foothold in Your Life
Revisited: Behind every excuse lies the real reason
Calming That Anxiety: When You Feel Jittery In a New Relationship