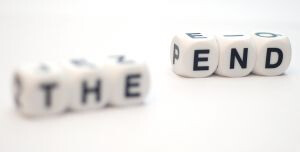 When a man decides to opt out of the relationship by ending it, it is no different to when he chooses to opt out of it by behaving in counterproductive, assclownish ways but not actually uttering the words, ‘It’s over’. They both amount to the same thing.

I was talking with someone a few days ago and she said ‘But he’s still here and until he actually says it’s over, I’ve got to believe that we still have a chance’.

But actually he’s already left the building. He’s sleeping around and she hasn’t actually seen him properly for several weeks. That’s a funny kind of ‘here’ to me. Aside from the fact that you have to ask why she can’t end it if he doesn’t actually end it, you also have to ask what on earth she is waiting for!

We often believe that once we hear the words that it will signify when our own action will kick in, but as many a reader can testify to, being told that it’s over is no guarantee of that. If we’re hellbent on avoiding reality and dodging the pain, him actually saying it’s over can signify the start of us doing and saying all sorts of things on our ‘win back’ campaign.

If a man says ‘we are exclusive’ and then shags around behind your back or shops around online, you’re not exclusive. Saying it and doing it are two different things. Anyone can say anything. But, can they live their words?

What’s the difference between a man saying ‘I want to break up’ or one that disappears for weeks (or even months) until you get the message? Nothing, it both amounts to the same thing.

What you have to be careful of is analysing the crap out of the who, what, where’s, how’s and why’s instead of dealing with the facts. It doesn’t matter why he disappeared for weeks on end and how much do you really stand to gain from obsessing about if it’s something you did? – His behaviour is despicable and disrespectful and not acceptable. Who cares why he did it? The fact that he has is a glaring neon light of a signal that says this man is not worthy of your time.

What you need to ask yourself is what are you waiting for and why can’t you process the info? What is it that he has to do before you say, ‘enough!’?

The reason I ask this is because often people’s ‘enough’ points don’t materialise and the yardstick just keeps widening and widening to accommodate him, your excuses, and your inaction.

I know from my own experiences though that actually, it’s like prolonging the inevitable. We think something is going to happen to change things but actually, the same end result occurs, we just take a sh*tty, long winded, painful route to get there and in hindsight we realise that we have to make judgements. We have to make decisions. We have to trust our judgement, our instincts, and the evidence, and do something.

These situations can leave you feeling indecisive but we have to make a decision and that decision only needs YOU.

Some people hover just below your boundary line
Advice: Why did he respond if he's not interested in me?
What Learning About The Special Effects in Apollo 13 & Titanic Taught Me About Future Faking, Fantas...