The more assumptions you make, the more misunderstandings you have to deal with (Mo’ Assumptions, Mo’ Problems) 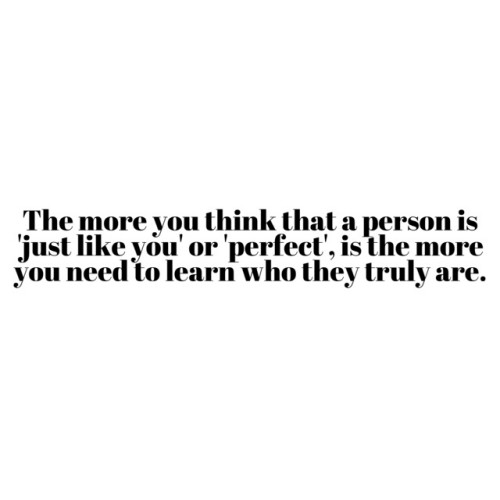 While sometimes our inability to understand each others’ positions on something can be attributed to incompatible values, sometimes it’s down to being at cross purposes – talking about different subjects without realising it and as a result, not understanding each other. Or thinking that you’re both communicating ‘correctly’ or the same… and not understanding each other.  It’s easy to assume that because we feel a certain way about somebody or because we share similar interests or values, that communicating with that person or being understood, will be that much easier. We think that they’re the same or similar and feel safe.

This is our human disposition – to look for the familiar so that we don’t have to familiarise ourselves with new things or so that we can slip into default habits. Habits automate a significant part of our lives. We’d be exhausted if we had to think out every last move and make many thousands of decisions, hence if we can find someone who we regard as being on the same page as us, we can relax a bit and make some assumptions about what to expect. Of course as many of us can attest to, we feel confused, anxious, or even slighted when people don’t behave in the way we expect. Just ask anyone who’s been through the, But we have so much in common experience of sharing similar hobbies, interests, and even outlooks on certain issues, and yet not sharing the same direction or their characters clashing.

When two people are trying to communicate their positions and end up being at cross purposes, what becomes apparent is that each party believes that they’re speaking the same ‘language’ and that they’re coming at it with the same thought process, when in reality, each has their own individual communication style and way of looking at things, which is only discovered through that discovery phase of getting to know someone and continuing on from there in reality.

The problems kick in with communication when we’ve already made a decision about how things should be, that’s likely based on assumptions.

If for instance, we meet somebody and in the typical fashion that tends to lead to issues further down the line, we take our initial perception of that person or our feelings, and then we over-correlate this information and make assumptions about who they are and what they’ll be and do, we’re likely to assume that they think, feel, and act in a certain way. The fact that they don’t – we’re all individual entities with our own thoughts, feelings, fears, motivations, beliefs, experiences etc – may not become apparent until the honeymoon phase passes or they do something that doesn’t fit with what we’ve predicted.

We will have superficial understanding of that person.

By skipping over the discovery phase, we miss out on due diligence and then at some point, we wake up in a relationship wondering why we feel ‘hungry’. We wonder why reality does not reflect our hopes, expectations, and yes, our imaginations, and it’s at this point that we may attempt to retrospectively do the due diligence (bit like closing the door after the horse has bolted) or we’ll query the disparity and attempt to communicate our concerns. It’s one thing if whatever it is we’re trying to address is something that the other party is on board with, but when it’s not because it may require a change in that person’s personality and values, or it’s not, because they quite simply don’t get where we’re coming from, we very quickly end up feeling frustrated and disillusioned. We feel misunderstood and even rejected.

One of the necessities and challenges of life is empathy, the ability to put ourselves in another’s shoes and understand their position. This doesn’t mean we have to agree with or become the person in question, but when we do begin to understand how somebody ticks, what their motivations are, and even what presses their buttons, and they’re willing to get to know us to this extent too, there’s a mutual regard and treatment of each other as individuals instead of as mirrors to generate what each wants.

Sometimes, when we’re talking at cross purposes, we’re so busy trying to get our point across that we don’t listen, whether it’s to the other party or the feedback we get through our interactions that communicate who they are. We don’t realise that we may be coming from a place of querying, Why aren’t you just/more like me? The more that a person believes that there’s something ‘wrong’ or unacceptable, is the more they shut down or the hostility, even if it’s passive aggression, increases. We also, instead of focusing on growing our understanding of each other, focus on what can become attacking the fact that one or both is not understood, or each defending our understanding of our respective positions instead of trying to figure out what the hell is going on.

Truly getting to know and understand someone on an intimate level takes time, experience, patience, some conflict, some criticism, and a willingness to suspend ego enough to communicate on a level with each other, which isn’t always easy. It takes mutual care, trust, and respect, and eventually love. Oh yeah – and reality. That language is ever evolving and what we know represents our understanding at this time. We have to be open to learning more.

It’s important that we’re not complacent. When we tend to take an assumptive stance within our relationships, we take it for granted that we’ll be understood and that each person will ‘get us’, or that there’s a certain point where we can just go into unconscious mode. We don’t think that we have to do certain things and act as if issues that can potentially bring the relationship to its knees, are just minor inconveniences that can be whitewashed or even erased with our imaginations and/or our feelings. We mistake honesty via our communications for being an automatic precursor for compliance.

If the same issue keeps rearing its ugly head, we’ll only generate a similar result and eventually end up fatigued by talking or even fighting about it in the same manner. All the pleading, high pitched squeaking, PowerPoint presentations, shouting and explaining extra slowly, won’t change the content. In turn, one or both will lose confidence that the issue can be resolved or just stop taking each other seriously.

In a relationship that we want to be healthy (and it has healthy components), we have to learn how to work with each other. When we assume the way that we communicate is ‘right’, it marks the other person as ‘wrong’.

Remembering that we don’t see or process things in the same way and that we have a different set of experiences and our own interpretation to draw on, means we’re always learning and continuously adding to the language of our relationships, which is the sum of both parties, not one dominant party trying to force the other to learn their lingo.

Many people have this idea that if it’s the ‘right’ relationship or that they’re ‘loved’, that you shouldn’t have to explain what you want or how you feel; a person should just ‘know’. That’s bullshit. Aside from assuming that we’re going out with crystal ball gazers, we’re also assuming that our feelings tell us what we know and understand about a person.

There’s no language that you ‘just know’; you’ve got to learn it.

Love Lessons: When You Can't or Won't Ask Questions When Dating (P2) Do You Have a Girlfriend/Wife?
The Trouble With Lying & Cheating (Why you need to stick to a low BS diet)
You're Not Going Crazy: It Doesn't Matter If They're Unavailable or Not That Interested