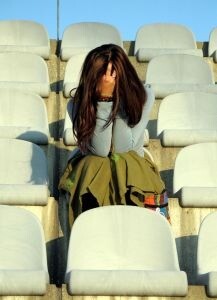 In Part 1 on Monday I gave you five key things to think about when you trade on your appearance and your sex appeal because I come across so many women who believe that their looks and what they offer sexually are their prime currencies. Naturally they end up with poor relationship success and as time progresses rather than deal with the real issues, they continue to look at what they can do to improve these superficial things whilst feeling bad inside. In part 2 of this three part series, I figured that the best thing was to use myself as an example, and the latter 5 points about trading on your appearance and sex appeal will appear in part 3.

I’m now 31, but as many readers will know, until almost four years ago, I projected a strong, carefree, confident attitude, but was full of inner turmoil which eventually threw itself out in an immune system disease and overwhelming epiphanies about my relationship history and self-esteem. I am living proof that being the ‘ideal size’ and having so called ‘looks’ does not equal a happy woman who could find a decent relationship.

My whole life, people made a fuss of my appearance, or so I was told by my mother who frequently liked to remind me that some people had stopped liking her because I was so pretty… I didn’t really become aware of my appearance though until I was about 13 and realised that I could attract boys which seemed to cater to this need to find that ‘loving’ feeling and the attention I hadn’t realised I craved so much.

Once I realised that I could attract boys easily, so began a long saga of chasing moody, aloof, superficial boys and I can admit, that even back then, I was looking for my ‘one great love’; that person who would complete me. Was it any wonder really? I’d been raised to believe that men were the no 1 thing for security and validation and I had never gotten over my parents splitting up before I was three, naturally creating insecurity and a feeling of invalidation. I was also taught that looks and appearance were everything.

By the time I reached my late teens, early twenties, I was very confused about myself. I had no problem getting guys clearly, but I feared that they would lose interest because whilst on one hand I was focused on using my appearance and sex appeal to gain attention, on another level I recognised that I didn’t really value other things about myself, so I feared them losing interest because deep down I knew that appearance and sex appeal were not going to be the making of a relationship.

And of course many a relationship went sour but it actually, it had nothing to do with my looks or sex appeal but because I

1) chose sh*t partners to have poor relationships with,

2) was desperate for love,

4) was convinced that there were things about me that were unlovable.

I just chalked it up to a dodgy dating pool and bad luck, often telling people that I must have a sign on my forehead that said ‘Dickheads, please approach me’.

I loved the excitement of seeing someone across a room and ‘somehow’ ending up talking to him and then going on date. I was already putting our names together, or imagining taking him to meet people, and lovey weekends away before I’d so much as gotten to know him or even made it to the date. I had high hopes for each and every one of them and experienced disappointment after disappointment.

I had a “secret test” that I wrote about a few years back.

“For years I have had this secret insecurity about men displaying their overt sexual desire for me, and what that means for me in terms of building a relationship with them. I don’t go around thinking that every man desires me, however since the start of puberty I have been able to attract boys and men, but there is a secret part of me that thinks that they are focused on looks or trying to ‘hit the jackpot’….

….Every guy I date or end up in a relationship with, is attracted to the physical attributes and the apparent personality that goes with it, such as ambitious, outgoing, apparently secure and self assured and self reliant, but that’s not what they want to actually go out with. Once they snare me, they want me to be less ambitious, less outgoing, less secure, and dependent on them sending a signal to me that whatever I have isn’t good enough.”

What’s interesting though is that I did use my appearance and sexuality as my key thing to attract men and yet, like every Fallback Girl and woman with poor relationship habits, I was dictating my own self-fulfilling prophecy, dooming myself and my relationships. I was a woman of contradiction.

Ultimately, no matter how much money I spent on clothes and shoes, how great my appearance was, or how sexy I was perceived, I did not like or love myself and I put myself in crappy situations repeatedly that ensured I liked and loved myself less.

As I said in part 1, I realise now that much like when I blamed the guy for why things were going wrong, focusing on my appearance and my sex appeal was just Yet Another Avoidance Tactic that kept me in denial about the real problems.

At the end of the day, you cannot say that you want to be in a fulfilling, healthy relationship with a man who loves you for you and isn’t superficial and sex obsessed, if not only do you choose poor candidates for relationships, but you don’t value yourself, don’t believe that there are loveable things of substance about you, and you don’t look for substance in your men or relationships – you just look for illusion and ‘appearances’.

Not one of these men made me feel secure or loved – they just enhanced the negativity but so did I by playing to the easy things I could flaunt at men and then moaning when that’s what attracted them.

Beneath the put together exterior lurked a woman who was really unhappy with herself, with rapidly deteriorating health, and confusion about who she was and what she represented. That was until I realised that it was up to me to decide who I was and what I represented – not men.

It’s not about saying, ‘eff my appearance, it doesn’t matter’ because there is nothing wrong with taking care of your appearance and wanting to look your best…if it’s for the right reasons.

It’s also not about pretending that you don’t want or need love but wanting and needing these things should never be born out of desperation or insecurity because it’s a breeding ground for low self-esteem and despair.

I could not find love or men that valued me as an entity because I didn’t love myself and I didn’t value anything beyond the superficial, which in turn made me feel even more insecure. The moment I started valuing myself and going beyond appearances, is the moment I started looking beyond the superficial with men and wanting to be in relationships and around men that matched those values and who brought their own substance to the table.

Feeling good about yourself on a variety of levels beyond the surface is not instantaneous but it’s very possible and it doesn’t take long. Trust me though, it’s very hard to do it if you surround yourself with people who by their very nature undermine and counteract those efforts.

Most importantly, I gradually learned to love myself unconditionally irrespective of what was happening around me, which means my value comes from me, not some jumped up assclown.

I don’t trade appearances or sex appeal because you get superficial back. I trade substance for substance.