What if you’re not inviting misfortune upon yourself? 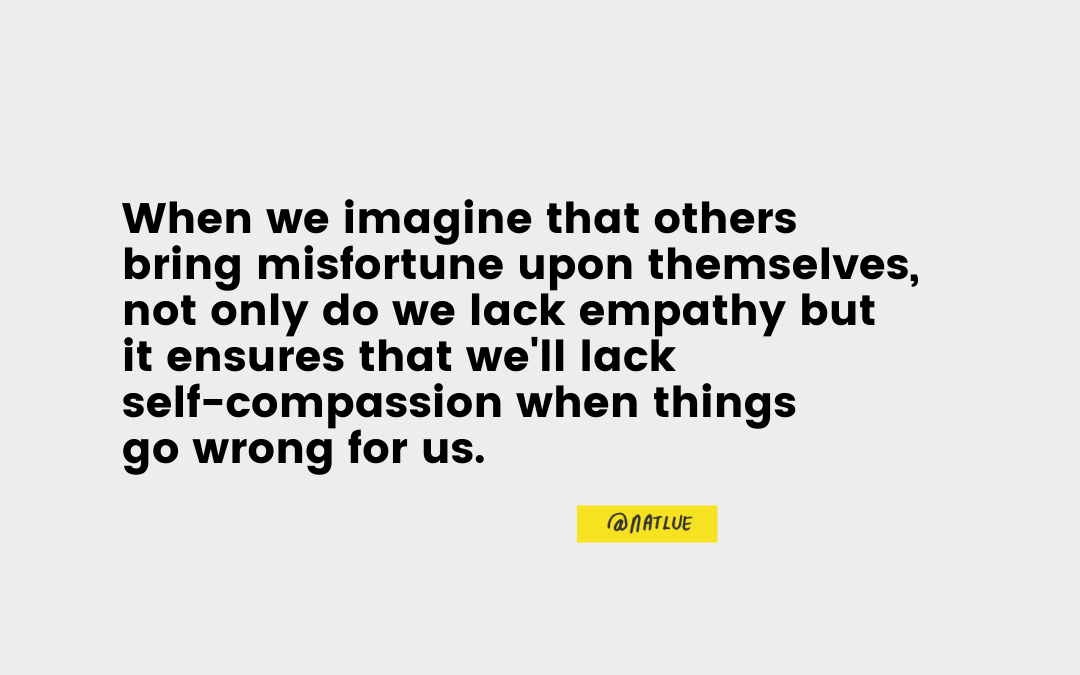 When life doesn’t go according to plan, when we believe we’ve erred or even failed, it’s worth considering whether part of why it feels so crushing, so painful, is the underlying belief that these things only happen to people who have not worked hard enough or been enough. This represents an internalised lie that we can control the uncontrollable. Apparently, being ‘good’ aka people-pleasing, trying really hard, being perfect, being over-responsible and overgiving are The Way.

Let’s be honest; we do, on some level, believe that these afford us a pass to certain things. It was drummed into us, whether via our family, school, church, community or the media. Isn’t that why we don’t understand why someone doesn’t want a relationship with us despite ‘everything we’ve done’? Isn’t it why we feel so wounded when something we imagined was a ‘sure bet’ doesn’t happen? Surely it’s also why we engage in comparison and feel envious of certain people. Their seeming fortune flies in the face of what we perceive to be the order of things.

Katherine May writes in Wintering that we humans have a habit of “…looking at other people’s misfortunes and feeling certain that they brought them upon themselves in a way that you never would.” This is bitingly true and dangerous not just to others but also ourselves. That kind of judgement and superiority means that we lack empathy and compassion when we need it most.

We coddle ourselves with the lie that we’re ‘better’, that we won’t go down the way that they did. We think we have it all under control. And then we experience our own misfortune and mire ourselves in self-criticism and self-loathing.

Many moons ago, I worked with someone twice my age who frequently confided in me about her affair. This was a decade before I would begin writing Baggage Reclaim, but I remember extending counsel and feeling for her that she lived on the fringes of his life and saw no better options. Truthfully, I also bustled with false confidence and naivety. I remember declaring in various conversations that I wasn’t ‘the type’ to be with an attached person. Having witnessed others’ torment and feeling certain of what I could control, I wasn’t going to ‘invite’ that upon myself.

So at twenty-six, when I became embroiled in an affair with a co-worker and experienced a health crisis, I became the person who had effectively brought misfortune on myself in a way that I imagined others never would. As I careered towards rock bottom, instead of seeking help and, in fact, taking care of myself, I hated me. I mined my life for evidence of the various missteps and failures that attracted and created this. Because that helps, not.

I internalised my misfortunes as evidence that not only had I messed up, big time, but that I was indeed what I’d always believed anyway: not good or lovable enough.

All of us will, have and do struggle. When we hasten to judge, to lack empathy, to take pride in not being ‘like them’, we need to halt. It’s time to check in with ourselves. Those internalised narratives of superiority, of what ‘hard work’, ‘trying’ and being a ‘good person’ mean don’t just harden us to others but also to our past, present and future selves. After all, when we inevitably find things difficult and experience our own bleak periods, we’re going to blame us.

While part of being human is to err, we’re not the masterful architects of our demise that we imagine ourselves and others to be. If we can give ourselves and others space and grace by acknowledging that not everything is within ours and their control or about ‘enoughness’, while we’ll still find life’s invitables–stress, conflict, criticism, disappointment, rejection and loss–challenging and painful, we won’t spend as long in them.

'After everything I've done for you!' - If You Feel Bad While Or After You Give, It's Not Giving
The Reset Button and Just Move On and Fuggedaboudit
Podcast Ep. 3: The Critical Parent's Effect on You, Mixing Up Boredom With Fear of Being Alone With ...