“Why aren’t I enough… for your crumbs?” When you wonder why you weren’t enough even though what was (or wasn’t) on offer sucked 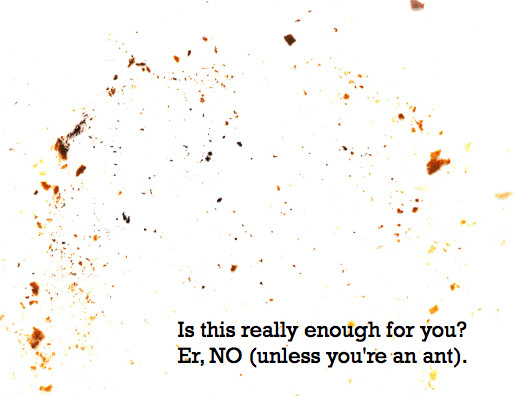 The difficultly with compromising ourselves in order to have a ‘some crumbs relationship’ rather than ‘no crumbs at all’, is that when the inevitable happens and we end up unhappy and/or things come to an end, we wonder why we weren’t ‘enough’ and where we went ‘wrong’. “I was willing to make ends meet with your crumbs and put them through the exaggeration oven and turn them into a loaf while making up the shortfall with my love, devotion and lack of boundaries and you still don’t want me?”

If you’ve ever been in this situation where you take a slide down a slippery slope and opt for people who are unavailable for a healthy relationship with you but then try to make them available, it becomes increasingly obvious that your needs cannot be met but you keep lowering your expectations, desires and needs to make it ‘easier’ for them to stick around. It also becomes increasingly obvious that no matter what you feel for this person, they aren’t ‘technically’ enough but the fact that you’d be willing to put up with crumbs would suggest that it would feel like a lot to you because in comparison to what you’re giving to you, it suddenly looks like a lot.

All of this messing around with ‘scale’ is very confusing and when things don’t work out it hurts and does a number on your ego and your head. It doesn’t make sense.

It haunts you that this person doesn’t want you and it scares you when you know that you had no business giving them the time of day let alone the steam off your pee. It guts you that everything you’ve tried to be is an identity especially cultivated and formulated for them. What are you supposed to do now? You’ve customised yourself and it’s not like you can return you to the shop and get a new version. Who is going to want you now? What are you supposed to do? Find another version of them to make the investment worthwhile? Incidentally, that’s how you end up repeating an unhealthy pattern trying to right the wrongs of the past.

It feels devastating and even humiliating that it feels like this involvement has cost you everything and not only wasn’t it ‘enough’ but they’re not ‘suffering’ like you. Trust me, they’re not ‘suffering’ like you because they’re not suffering from malnutrition like you! They’ve reaped the benefits! You’ll also feel like this if you felt idolised by them (in the beginning of course…) and felt needed/beautiful/important/popular and now it’s stopped and what you thought was ‘enough’, even if in reality it was only for a short time, now isn’t ‘enough’. Where did I go ‘wrong’? you wonder. Why have I been discarded? 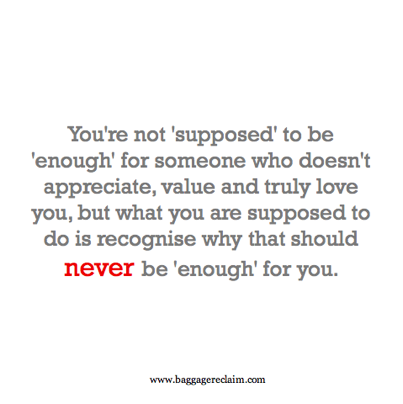 A relationship that has you being and doing these things is a dangerous one whether your attempts are driven by you or him/her. No one who truly loves and cares about you would have you jumping through hoops nor would they feel comfortable with you doing it as a way of showing your ‘love’. It would put them on a pedestal and make for a hugely imbalanced relationship that just isn’t sustainable.

This is not what love or an even moderately healthy relationship looks like; carnage looks like this.

There comes a time when you have to start questioning the madness of wondering why you weren’t enough for someone who wasn’t enough or whose crumbs shouldn’t have been enough for you. The fact that you would have been prepared to live off crumbs doesn’t make this person ‘right’ for you nor does it mean that the relationship ‘should’ have been viable.

There also comes a point when you have to ask why crumbs are enough for you in the first place. Why is this an uncomfortable comfortable for you? Why does this feel like ‘home’? Who are you really trying to be enough for?

When you’re enough for you, you come as you are.

You don’t sign up or continue to participate in what feels like a permanent audition for someone who it feels like you’re never enough. Believe me as someone who went from childhood to adult feeling like I couldn’t please (I should’ve tried harder, got a higher grade, a better gift, looked a certain way, not made mistakes), I know the madness of trying to please the unpleasable stops when you don’t base how you feel about you on others, but more importantly, you don’t subject you to living the life of an inadequate performing seal.

I stopped trying to be enough for my parents through my ‘romantic’ partners. I’ve had to learn through trial and error how to be enough for me and the day I stopped doing this is when I felt a weight off. It’s liberating to be a grownup and I no longer subsist on a crumb diet and abandon myself.

The irony is that we feel tortured because we can’t seem to reach the tipping point of pleasing somebody to be ‘enough’ and yet we ourselves don’t feel ‘good enough’ and are comparing, feeling less then and going for the long shot of being perfect and so essentially, the very thing that we feel wounded by from others is what we’re doing to ourselves.

If you don’t feel ‘good enough’ and wonder why you’re not enough, you are the person in your life that you cannot please and when you please you, believe me, you’ll know that you’ve done more than enough and see the shortfall from others and tell them to jog on not go chasing after them!

When you accept that you are enough as is instead of rejecting you for not being your version of perfect, you set boundaries with you and with others and won’t subject you to the merciless and constantly moving goalposts and the bullshit whims of others.

When you’re enough for you, you won’t wonder why you’re not enough for crumbs because you won’t be prepared to settle for less than what you’re already doing for you. You also won’t exaggerate the sh*t out of someones paltry efforts. You’ll also question why they aren’t enough and use that insight to guide you to a more fulfilling relationship both with you and others, instead of equating those answers to ‘failings’ on your part. You’ll see that him/her not being enough doesn’t mean that you’re not but it does mean that you need to move on.

Why aren’t you ‘enough’? Because you’re not supposed to be enough for something and someone that would sell you short, when you’re already ‘enough’ and will be enough in a mutual, healthy relationship. You truly are worth more.

Why some people call you “needy” even when it’s the first time you’re speaking up
When Knowing That You're Crazy About Them / In Pain Is As Good As 'Having' You
Have you been affected by The 12 Weeks of Self-Esteem Torment?