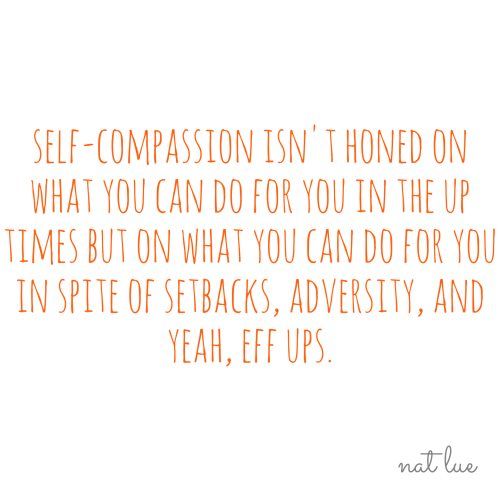 Talking with readers and friends who have struggled with their sense of self and it impacting their career or educational path, there’s this common thread of an early experience that greatly influences their current outlook and actions.

When experiences like this are left unprocessed or aren’t reviewed further down the line with a fresh perspective and self-compassion, conclusions are formed from which shamed judgements are made that go on to inform your opinion of you and your options. They  (the experiences) form part of what appears to be a body of evidence regarding your worth. You’re won’t internalise your achievements, accomplishments, your character and basically the good things about you. You may feel like a fraud.

If you recognise yourself, it’s time to ask where your self-compassion and empathy is?

Sure you may have made mistakes (who hasn’t) but you’d be surprised at how self-critical we can be of ourselves in situations where we’re effectively accepting the blame for assholic and possibly illegal, or at the very least socially unacceptable behaviour. There’s also the not so small matter of taking situations and incidences that represent periods of time not your lifetime, and then deeming them to be catastrophic to your future on earth.

When I was 20, in the space of a few months, I struggled with my first sales job, failed a crucial university exam on the degree I hated, was sexually and racially harassed in a retail job plus let’s just say that I had to leave home… All of this messed with my head but the harassment was compounded by me confiding my pain over the situation, only to be informed that maybe if I’d styled my hair better and smiled more that this wouldn’t have happened. Reeling and wounded, I tried harder. I didn’t see that overall, he was a mean spirited individual to everyone but more importantly, his behaviour said far more about him than it did about me.

Fury, hurt and indignation simmered within. I was raised in Dublin, Ireland, and despite being one of only a few black people at the time, this was my first experience of systematic racism. I felt humiliated and ashamed and it confirmed my belief – there was something seriously wrong with me.

One day he said “See you tomorrow!” in his smug, mocking tone with his leering, disrespectful eye sweep and something snapped. “Not if I see you first asshole!” I replied, and I strode out of the shop, only quickly glancing through the window to see him standing there red faced and bewildered.

Some people would worry about ‘burning bridges’ but I’d reached a point of not only thinking ‘Eff the bridges’ but I’d already been burning another bridge – the bridge between me, myself and I. As it was, he was fired a few weeks later for harassment of other staff members. It was a shame I’d personalised things to such a degree.

Be careful when you’re out there pussyfooting around while selling you short that you don’t end up regretting trying to preserve something you don’t need or a mystical reputation.There is no need to ‘collect’ exes, mercenary and abusive bosses, ‘useful’ but shady friends etc, just for the sake of not ‘burning bridges’ and this idea that you may ‘need’ them one day. Need them for what? An arsenic laden favour?

Could I have done different? Absolutely, and you know what? I went into a downward spiral for several years and when it (harassment) happened again a couple of years later and then again (really!), I didn’t even hesitate to handle it. However, it was only as I started my recovery from my illness and writing Baggage Reclaim that I realised how I’d thrown me under a bus at the times when I needed me most.

Self-compassion isn’t honed by what you can do in the up times but what you can do for you in spite of setbacks, adversity and yeah, eff ups.  You also don’t learn self-compassion by never actually doing it on a consistent basis. It’s like expecting to havemuscle strength without doing the work to build them up.

If you consider another person in the same position as you (like a close friend for instance) or you just look back and consider the overall context and remove the past and your ego out of it, a very different picture reveals itself.

It’s not about what some would perceive as ‘letting you off the hook’ – it’s disproportionate to say the least that you would effectively punish you and refuse to move on from an experience and grow out of it, even when a few decades might have gone by. There’s no hook to let you off. It happened, you learn, you have to move on from it not rub your face in it until kingdom come.

Do any of these past experiences warrant the great deal of influence that they have over your current thinking and behaviour?

When we still see something from the past in the same way despite the passage of time, it reflects a lack of growth in our thinking and behaviour. We mustn’t freeze ourselves in time or take experiences and determine them to be an unchangeable statement of our future.

Some of the worst that we experience actually holds a great deal of insight into what does and doesn’t work for us. Don’t let your ego be the driver of dangerous generalisations about your worth and capabilities.

I used to feel like a freak and while there are people out there who’ve never failed an exam, or dropped out of uni, changed jobs/careers, tried every flavour of shady relationship, dealt with alcoholism and other chaos within their family, or had a traumatic experience,  there are so many people like me that it’s laughable that I used to think I was doomed or ‘unusual’.

It’s actually as a result of a lot of this stuff that I’ve figured out who I am. I also went on to do a degree I wanted, had a sales career in media, and shock horror, none of the things that I agonised over have actually limited my opportunities nor did the sky fall in. The way I saw these problems and situations was a problem in itself.

These ‘weights’ that hold us back while they continue to matter to us, they don’t matter anywhere near as much to our present or even to a lot of the people we think it will matter to. We have to be careful of projecting based on our distorted mental picture of ourselves.

Over time, I’ve ‘forgiven’ the me I’ve been at various different ages and felt a great deal of compassion. It’s funny how until you change your perspective, you don’t realise how ridiculously tough you were on you whether you were 5, 15, 25 or 50!

Step into the shoes of the you that you were in a particular time and empathise, you know that thing that a lot of us love to talk about and claim that others can’t do while not doing it for ourselves? What and who do you see? Can you be kinder to you? What can you learn about the situation and you? How can you use this experience to learn how to have your own back? Make sure that if you’re carting your past around, it’s with the handy lessons you’ve skimmed out of it, not the dead weight and distortion!