Advice Wednesday: Will I Ever Stop Obsessing About My Ex & Find ‘The One’?

Nicole asks: I have been single since 2007. I haven’t had someone I would call my boyfriend since then but have had other types of relationships.  I have developed an unhealthy obsession with my last boyfriend from 2007 which rears its ugly head far too often for me to be comfortable that it will pass.  It has been almost 10 years at this point.  Every 6-12 months I obsessively search social media for any clues of his existence along with his girlfriend, who I went to high school with and knew through 2007.  I feel shame, guilt, betrayal and extreme loneliness after I go through these spells.  For other reasons I have gained weight, which has messed with my self-esteem.  I have drama with the father of my 2 children and have had to bear the financial weight of taking care of my family (I am the man). All of these factors make me wonder if I’ll ever find “the one” and enjoy life again. I’m no longer in my 20s and scared. Needing your guidance.

Whenever we slip into a cycle of obsessing and ruminating, the clues to why lie not only in the events that preceded it but also what we’re afraid of. If we feel as if we messed up in a big way despite doing everything that we were ‘supposed’ to, we will keep circling back to what we feel was our last shot at putting everything right. We will analyse everything that we and they said and did and ruminate over all of the reasons why things didn’t go according to plan, veering between feeling cheated out of what’s ours and feeling inadequate, so ultimately blaming us for not being good enough.

Why do we go back to the scene of the crime and rub our faces in it? Punishment? Yes. Avoidance? Definitely. Trying to feel in control? Absolutely.

Ten years of going back and it’s safe to say that this obsession has spared you from having to truly put yourself out there but it’s also served as a major distraction. Just as things start to move forward or there seems to be something else stressing you, you dip back into his life in order to feel in control again. I imagine that fear of being taken advantage of, fear of having to sacrifice anything else means that while on one hand you desire companionship, a relationship even, that feeling that you cannot trust men to have your back means that it’s safer to obsess about the last one than it is to move forward with healthier boundaries and manage your ex.

When what you say that you want looks very different to the outcome, I have to question what’s in the space between? What are you believing about yourself, love and relationships behind the scenes? 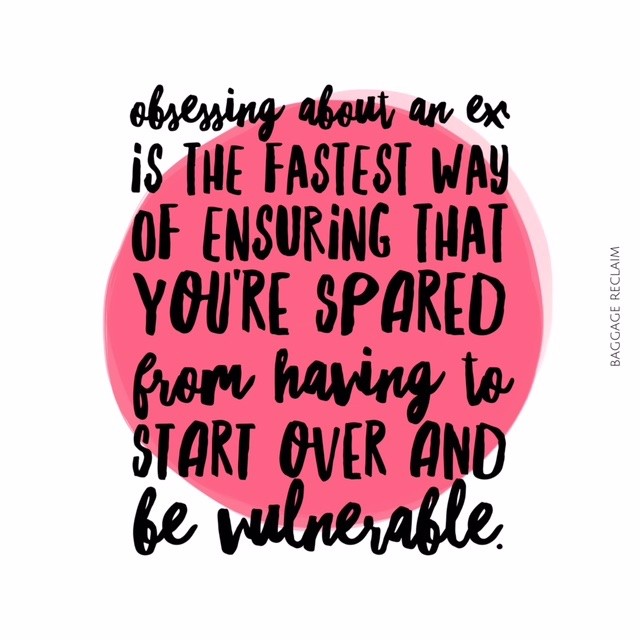 Much of you was invested in the relationship that ended in 2007 and when it ended and he moved on to his current girlfriend who you also went to high school with, it tapped on old wounds and pushed on old buttons. Maybe she was your nemesis, maybe she’s emblematic of a period in your life where you felt in deep pain and very inadequate, but him now being with her burns you. She represents something that you’ve gotten stuck on, likely something that sets off feelings of jealousy and envy. You don’t believe that you’re “good enough” and gaining weight and the situation with your children’s father is exacerbating these feelings.

You are territorial about the ’07 ex hence why you keep checking up on him and feel wronged that he’s with her but you’re also envious because even though you in some respects think that she’s better than you, there are aspects that you feel are similar or where you even feel ‘better’ and it doesn’t feel fair that he’s with her. Why her and not me? It’s decimated your confidence.

You go through the cycle of rubbing your face in their lives where you attack your self-worth and compare you to her and retrace all of your steps with him and all of the painful feelings of your ending with him resurface. There’s shame about doing what you’re doing but you also keep experiencing shame because you keep on some level telling you that you have misstepped so badly that you should feel embarrassed and humiliated.

You’re punishing you by holding your relationship with him over your head lest you forget whatever mistake you feel that you’ve made.

Guilt is the superglue that binds you to the past and keeps you stuck. It’s a form of avoidance where you keep persecuting you over a wrongdoing and yet nothing changes and you’re not allowed to move forward. While you feel as if he’s betrayed you by being with her, you’re also betraying you by using social media to support the lies that you tell yourself about them and you, no doubt a fairy tale where they’ve lived happily ever after and you’ve been cast aside to writhe in pain.

Obsessing is very lonely because it’s not something that other people tend to be included in and the feelings of shame and how long it goes on for make it harder to confide in loved ones. Loneliness isn’t about worthiness or how many loved ones you have; it’s an emotional state prompted by feeling emotionally disconnected from others as well as from yourself. You have stopped sharing your innermost thoughts and feelings and have ended up adrift.

To be a single parent can sometimes put you in the position of playing both parental roles–it’s why I say happy Father’s Day to my mother every year. Despite you doing all that you do for your kids, I’d lay bets that you give you a hard time for ‘failing’. Acknowledge your efforts. You’re doing the best you can.

It is OK to admit that you need help and that you can’t do it all alone. No, it’s not going to necessarily change the father of your children but it will change the way you’re feeling. Obsessing, stuffing your feelings down with food–they’re all protective means of helping you avoid vulnerability. No one can come close.

This last relationship activated deep pain from the past.

Use therapy or some other form of professional support to identify what it is from your past that is showing up now because when you heal that old wound, you will also start healing the present wound and will be left with the energy to take care of you.

What or who does this pain remind you of? Whose love did you crave but didn’t get or wanted more of that this breakup with him is reminding you of? Which wrongs from the past are you still trying to right? What do you feel out of control of (e.g. the father of your children) that you’re overcompensating for by keeping tabs on your ex? What’s the specific trigger every 6-12 months? What are you feeling/thinking/doing/experiencing at that time that sets the pattern of looking them up on social media in motion? If you accept that this relationship with him is done and that he’s with her, what does that mean? What did getting together with him represent for you? Just because it didn’t work out with him, it doesn’t mean that all of your hopes and dreams for a relationship have gone.

And here’s the thing: You’re not alone. Lots of people feel stuck because they’re obsessing over something or someone. I’ve been there myself. You’re not weird; you’re human. It is a combination of factors that brought you to this juncture, not just this ex or him moving on with the woman you went to high school with. To acknowledge your deep pain would be to begin setting you free. It’s small steps every day and I suspect that putting some resolution on the father of your children situation would allow you to begin feeling more in command of you so that you don’t overcompensate by focusing on this other ex. For the last decade, this situation is what’s ‘worked’ for you but now you want out but know that revisiting your ex via social media and being open to meeting ‘The One’ are mutually exclusive, so uncover the underlying reasons for your focus on him with support. And forgive you.

Have you gotten stuck obsessing about someone? What did you do to begin setting you free?

For more help with obsessing and ruminating, check out Curbing Your Obsession and The Dreamer and the Fantasy Relationship.

When Knowing That You're Crazy About Them / In Pain Is As Good As 'Having' You
Reader Advice: Help! I feel rejected by an assclown and can't let go
'Is He Different With Her? Why Did He Choose Her Instead of Me?' - When You’re Not The One (or they ...