The Relationship or Situation Not Working Might Hurt, but It Isn’t a ‘Waste’ 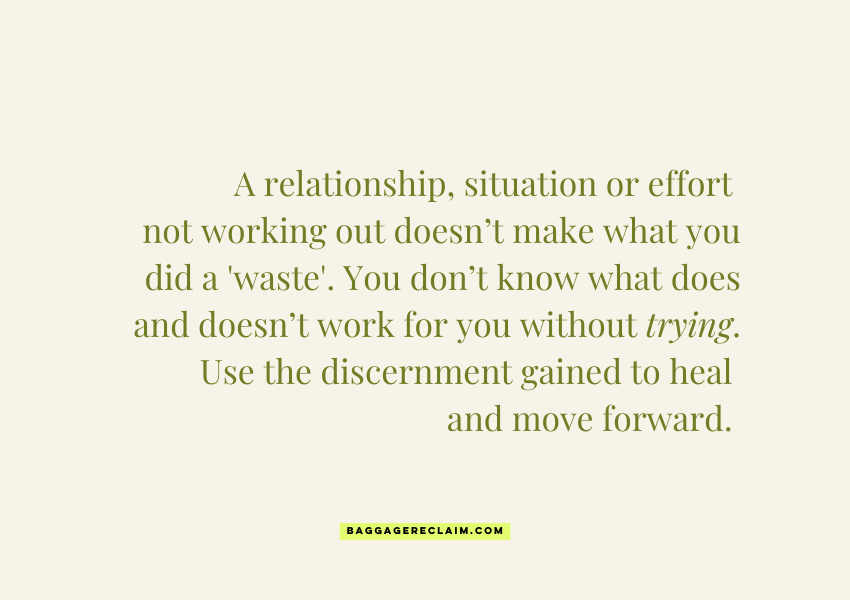 When you feel hurt and disappointed, a deep sense of loss can kick in. Like when you’re in the aftermath of a breakup. You might believe that your efforts were a waste because you may have invested months or years. Or maybe you compromised yourself by doing things that, in retrospect, you don’t feel were worth it because here you are hurting and empty-handed. This It-Was-Such-a-Waste feeling creates this sense that the risking of your heart, trying to make an effort, of laying it all on the line, in your mind, didn’t pay off.

At times, the pain can be excruciating. As you grieve your breakup (or other loss/disappointment), the It-Was-Such-a-Waste feeling can leave a sour taste in your mouth. You experience anxiety, anger, shame, and more, about the injustice of it all. These reactions, by the way, are normal. Rest assured that you will come out the other side if you don’t let these stories and feelings have a stranglehold on your life and you gradually grieve and adjust your perspective.

It’s easy to rationalise that silencing your feelings or allowing yourself to keep telling the same stories even when untrue and painful isn’t a big deal and even that it’s ‘self-preservation’.

In reality, avoiding grieving the loss of your hopes and expectations and coming to terms with what’s happened only manifests in harmful and unhelpful ways. This includes impacting your emotional, mental, physical and spiritual well-being as well as how you, for instance, show up in existing or future relationships and the opportunities you allow yourself to go for. This avoiding of yourself also only creates a greater sense of regret about ‘waste’.

Feelings are the path to interdependence because you get to update your perspective. By allowing yourself to feel your feelings, you can take better care of yourself. It also means you can understand what you actually need and have a greater sense of your boundaries and so you’re able to forgive yourself. You use the ‘waste’ and turn it into your power.

Living in the It-Was-Such-a-Waste feeling causes you to tell stories that don’t distinguish between you and others. And when you don’t know where you end and others begin and you also deny your ability to take care of yourself, this fosters co-dependency. This includes feeling as if you have to cut off from others and avoid risks to protect yourself.

Grieving the loss of a relationship means that you need to feel all of the attendant feelings but also change the meaning of them.

…you are going to be in much pain for quite some time.

You can’t change the past, much as you might want to. It’s possible you’ve already tried, maybe numerous times. And I get it. When we’re afraid of something being a waste, we keep trying to avoid accepting the truth about the situation.

The thing is, whatever happened–time invested in a relationship, situation or activity–it’s not a waste.

A ‘waste’ would be to not have tried at all and then regret it.

A ‘waste’ would be to walk away from this relationship or situation with a distorted self-image based on an untrue story you’re telling yourself about what happened and why.

Giving up on yourself, on trying again, would be a ‘waste’. There will be other opportunities. You’re not ‘too old’ or whatever other guff you’re telling yourself. There are also over 7 billion people on the planet, so the sun doesn’t have to rise and set on the one particular person with whom things haven’t worked.

What you studied or worked hard at only to realise that it’s not for you isn’t a ‘waste’. Mate, that’s data! Use it.

A ‘waste’ is to invalidate every good experience you had with someone or all the other good things in your life, just because you’re hurt and disappointed. Giving of yourself isn’t a waste, and it’s not something you only do when you’re assured of what you will get in return. Take what’s happened and turn it into a more boundaried you so that you can be open to something better.

You don’t have to be so all-or-nothing.

A relationship, situation or effort not working out doesn’t make what you did a ‘waste’. It doesn’t. You don’t know what does and doesn’t work for you by not trying. Everything takes investment, and what we think we need or want is a hypothesis. Focus on discernment, not waste.

Relationships along with life’s inevitables–conflict, criticism, stress, disappointment, loss and rejection– reveal where we, as humans, need to grow. This is life, and none of it’s wasted.

When I was ready to pay attention to myself and my life, I realised that my choice of relationship partners spoke volumes about my feelings and beliefs about myself. This realisation meant that if I wanted better relationships I needed to change the way I felt about and treated myself. If I wanted respect, I had to be respectful to myself. That was a sobering realisation.

We don’t know where we need to adapt our thinking and behaviour without experiences that teach us some rather hard-earned lessons.

You’ve done the best you could with the knowledge you had at the time.

It’s not a waste. What are you supposed to do with the rest of your life? Not bother anymore because of this experience? That looks like more of a waste than anything you’ve ever been and done in the relationship or situation you’re hurting over. Regret is what happens when you wake up in six months or a year, or five (or whenever) and realise that how you see and do things hasn’t changed. That’s more of a problem than whatever you’re grieving.

Use recognition of the It-Was-Such-a-Waste feeling to be compassionately honest with yourself. Anything you do that allows you to try to be more of who you are is great. It’s an investment in being more you. And anything that with the benefit of hindsight you realise was a less authentic version of you that you wish you hadn’t been, that’s data for future discernment.

Being Afraid To Feel Angry In Relationships or Post Breakup
'Why him/her and not me?' Not everything is about us!
Moving On From Disappointment: Are you focused on the person, or on the bigger picture of your life?