“I Wish I’d Done Things Differently!” – Getting Over The Regret Hangover 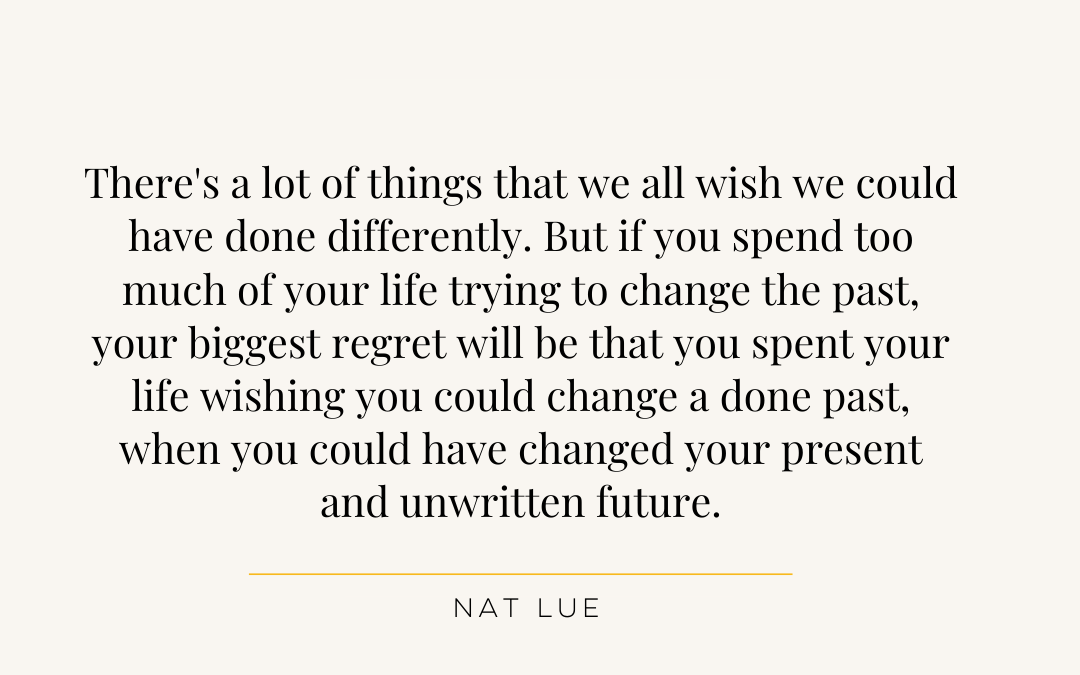 After the struggles with December, I hear from lots of people who struggle with the ‘freshness’ of January. There’s a lot of regret. It’s the sense of no longer being inside a year where an event or situation took place. Something that we’re holding onto seems less current when we have to say “last year” or “last summer”. This sense of leaving something behind and having to look ahead can compel us to do something to seek attention and validation and ultimately make the past current.

A big part of the reason why we go back is due to regret. It’s this sense of wishing that we’d done things differently. Even if what we think we should have done differently is irrational, it’s then feeling disappointed, sad, guilty, remorseful or even ashamed.

“I wish I’d done things differently!” We only wish this because we think that “everything” would have been different.

It’s the whole One False Move mentality. We think If I had just done X or hadn’t done Y, then Z wouldn’t have happened. When we have an overactive blame thyroid, languishing on regret becomes rumination and obsessing. Next thing, we’re doing something in the hope of easing the regret. This often takes the form of the seeking attention and validation. We might attempt to return to the relationship or situation for another round. Or, we’ll try to right the wrongs of the past with someone new.

It’s not uncommon for someone who has regrets about a parent or lover who was addicted to something or unhealthy in some other way to then be involved with someone similar who they attempt(ed) to fix their problems and right the wrongs of the past with. They try to fill voids created by unmet needs.

Regret hangovers are what happens when you want to go back and change the past. You want to have a shot at making the preferred outcome happen, and you’re attempting to undo what’s already done.

The more you meddle, the more regret, the more you resist the reality that the past is done. If you want to truly improve anything, it’s about living your life well now, not trying to do live versions of Quantum Leap. Remember that series? Often the outcome didn’t change although sometimes it was delayed.

You won’t have a regret hangover if you minimise the amount of time spent living in the past or beating yourself up. This means not beating you up for what you didn’t know or do at the time or for other people’s behaviour. It also means not languishing on ‘mistakes’. Why keep throwing something back in your own face? That’s torment.

It easily forgotten but the past is the past for a reason: it’s happened. It’s done. Each moment you spend living in the past turns the present into a similar past. It just becomes an extension, a continuation of the same story.

You don’t know that if you’d done things “differently” that the outcome would be any different.

As an individual, you can evolve out of regret. There are things I’ve been and done in my life that I’m not proud of. There are things that happened that I’ve wished hadn’t because no child/teenager/young woman/person should experience these things. But I did experience them. No matter what I do in my life, I can’t change the past. I’ve had to endeavour to stop letting it define me.

The danger with regret is that it affects how you see a situation, person or problem. How you see things becomes the problem in itself. You can become fixated on this ‘solution’ being applied to your perception of things. When you have a reasonable level of self-esteem and are willing to entertain a perspective where you’re not owning an entire situation and making you responsible for Other People’s Behaviour, you see things differently.

A problem arose with a friend’s work project. They advised the coworker investigating the issue to take an overall look before latching on to the first idea that sprang to mind. The coworker ignored the advice. They decided that the problem was X and spent a few days pursuing this investigation and trying to solve it. It turned out that there was a wider issue.

Regret is often latching onto this idea that what you feel regretful about was the determining factor for the outcome.

Possibly, but maybe not. If it’s only you in the situation and you had a great deal of control over what you could do, sure. Examine (and learn from) what you could do differently. But if there are things beyond your control like people and circumstances, you can’t own everything.

If you perceive you to be the reason for another person’s behaviour, what you need to regret is burdening you with other people’s bullshit. Regret that you’re still adopting thinking and behaviour that disempowers you. And then resolve to do better by you.

Regret hangovers grow in size when you feed them with a cocktail of blame, shame, guilt and obsessing followed by doing stuff off the back of these feelings. In an attempt to prevent what you perceive as an unfavourable outcome, you open you up to further pain and extend your suffering.

There are always things that you could have done differently.

It’s very rare that you’re going to go “Yeah, there’s not a damn thing I would change about this day, week, month or year”. There are always things that you could have done differently, but you can’t, although you can influence your present and future experiences by doing things differently, moving forward.

Whatever you wish you’d done differently, use it to grow and learn from the insights gained.

Things happen for a reason. It’s just not always obvious what that reason is at the time. In no longer punishing myself, I’ve come to trust that it might hurt or piss me off now, but at some point, the reason for why I did something or why it happened will become clear. The less I fixate on it, the more my perspective shifts.

You have to choose to be done, and you also have to forgive you for where you’ve erred. Be careful of letting you picking you up on everything you feel you’ve done ‘wrong’ steal away gratitude, happiness, and general good feelings about the things you do do well. It robs you of good memories.

Regret hangovers last and hurt a hell of a lot when you realise that your feelings and actions haven’t changed significantly since the original point of regret. That’s how you get over and reduce regret hangovers: you go easy on you, try to remember some of the good stuff and avoid repetition of what you know hurts. The more you beat you up, the less self-esteem you have to move forward and also the less perspective you have. Improving your self-esteem is a good regret hangover cure.

Do we really want closure, or are we trying to win at proving we're a Good Person?
Getting Past The Fault Lines: Relationships are 100:100 Partnership, Not 50:50
Shifting from blame to taking responsibility for you