Are You Trying To Prevent ‘Unfavourable Outcomes’ & Missing Out On Life Or Ending Up In More Pain? 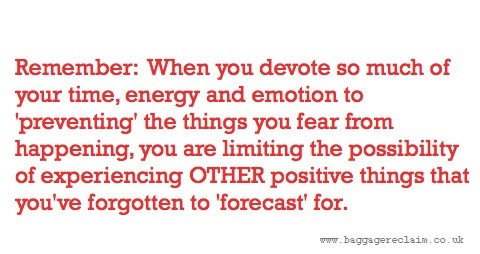 One of the things I’ve noticed in life is that we spend a lot of time ‘preventing’ what we feel are the potential for ‘unfavourable outcomes’. What we then discover in hindsight, is that while while working hard to prevent what we’re afraid of happening, feeling, and facing, we exclude ourselves from something that would actually have benefited us and would have been worth facing our fear, or, we invite more pain.

We end up with a very narrow focus that stops us from seeing the bigger picture, often because we’re instant or short-term focused, or so incredibly uncomfortable with the possibility of experiencing something that we didn’t like before, possibly because we think we can’t ‘handle’ it that well or because we’re still giving ourselves a hard time over the previous efforts.

People tell me that they’re trying to prevent being rejected by someone, so they start doing all sorts of ‘doormat missions’ that not only result in them feeling taken advantage of / abused and rejected, but also leave them struggling to come to terms with their self-rejection in the process.

Not wanting to experience rejection is also why some people don’t put themselves out there or they find ways to get out before they’re ‘pushed’ out. But they feel rejected by opting out of trying or they’re often in turmoil about jumping ship anyway so they’re not really preventing what they set out to.

People tell me that they keep texting / emailing / dialling someone who is half-interested or even not interested, because they don’t want to be forgotten. Aside from putting themselves on a crumb diet and inflating it into a loaf, while they may be preventing being forgotten, they may actually be memorable for the wrong reasons plus they’re preventing themselves from being open for something better and being in a relationship where they don’t get RSI (repetitive strain injury), overactive imagination burnout, and analysing the crappola of out of texts/email overload.

Maybe you’ve tried to prevent facing the possibility of your partner moving on and becoming a better person in a better relationship with someone else, even though you’re very unhappy in the relationship you have with them and whatever they’re doing and whoever they’re being isn’t working for you. Guess what? You’re preventing yourself from being your best self in a better relationship or life in general while you play security guard on your investment. It’s not even like you’re holding on because you’re working on it together – you’re holding on because you want to prevent having to deal with an ‘unfavourable outcome’ that you might blame yourself unnecessarily for. It’s also like deciding that you’ll be miserable together, rather than run the risk of having to sort your own happiness.

Maybe you’ve tried to prevent someone from thinking one particular thing about you, but in expending so much effort into trying to get into Other People’s Minds and seeking validation, you haven’t prevented them from drawing another conclusion or from behaving any differently.

Maybe you tried to prevent the possibility of not being there on the off-chance that a married / attached person decided to finally leave. Well you’ve certainly prevented yourself from seeing that they haven’t left and what that actually means, but what you definitely haven’t prevented is the awful feelings that consume you and the gnawing ache of a half life at best.

Maybe you’ve tried to prevent ‘failure’, only you’ve also prevented success because you’re scared of getting that wrong too, plus how are you going to grow out of your experiences, including any so-called ‘mistakes’, if you won’t face the truth, even when it’s difficult?

Preventing ends up causing you to avoid what can be some very positive and even enriching parts of life – experiences that have your whole self in.

You can put so much energy into avoiding all of the things you fear such as abandonment, disappointment, rejection, conflict, failure, decisions, risk etc., that you end up taking cover, missing out on your own life, and being full of regret. This regret comes because you stuck with a preventative position in spite of compelling reasons to do otherwise – adopting a position of making things happen by influencing your own habits and choices so that you naturally minimise the things you fear from happening because you’re in a happier, healthier situation. Or, when the inevitable pain in the bum and difficult things happen in life, you have habits and thinking that put you in a better position to face them instead of treading water.

And the funny thing is: Many of the ‘unfavourable outcomes’ that we bust our tails trying to prevent are really not that unfavourable and are actually blessings in disguise, teaching us positive lessons about ourselves about where we may need to adapt our habits and thinking, and removing us from people and situations that are not meant to be part of our future.

For more on grabbing onto life instead of dodging it in painful situations, check out my books The Dreamer and the Fantasy Relationship and Mr Unavailable and the Fallback Girl which are available from my bookshop.

Podcast Ep. 114: Have I Outgrown My Friendship?
When our friend dates our ex, is it OK, and can we be upset about it?
When Knowing That You're Crazy About Them / In Pain Is As Good As 'Having' You