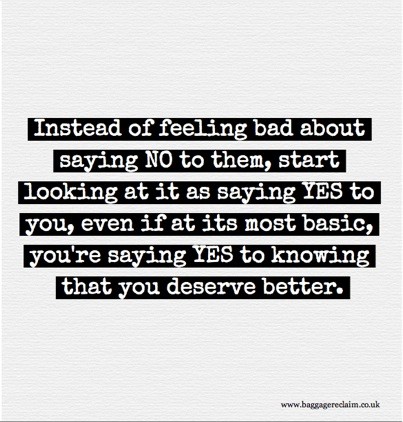 Recently a friend who is going through a breakup and trying to do No Contact (NC) vented her frustrations about how exhausting she is finding trying to fight off the urge to call, to send a text, to push for another discussion, to go around to his place and check if she’s been replaced and to fight the urge to push for reconciliation, especially as this relationship is more done than the gheri curl.

To be honest with you, if I was going out of my way to devote what sounds like every waking hour to either fighting the urge to reach out to being prepared for combat, I’d be exhausted too and I certainly wouldn’t have anything left to give in terms of self-nurturing or just being able to put one foot in front of the other and do my best to get on with my life.

My numerous initial attempts at NC were unsuccessful due to me fighting the war on self-esteem. I admit it – I often broke NC and ‘gave in’ simply because I was knackered. It felt like a relentless breakup because during my stint as the Other Woman, my whole life was consumed by him or my feelings about him and the situation. When I tried to end things (admittedly it was me having tantrums and hoping he’d spontaneously combust into being girlfriend free and minus his issues), I didn’t know what to do with myself.

So of course a lot of the time what I was viewing as the same ‘urge’, was striking me and I was veering between trying to have the willpower to resist or assuming that this many urges must surely mean that I should give in. I thought it was some sort of message.

Remember that just because thoughts pop into your head, it doesn’t mean that it’s the Breakup Spirits trying to guide you back to your ex. “Go on. Text him/her and get yourself invited around for sex!” You broke up! It’s natural to think of your ex during the grieving process but you don’t have to chase every thought, whim and urge, and you certainly don’t have to remedy these thoughts with behaviour that you know only ends up hurting you further.

Of course, if I’d soothed feelings of boredom with something healthier, or faced or managed my stress, or sat with my feelings and stopped bashing me over the head about them, or actually payed some attention to my health, then I would not only have seen these ‘urges’ for what they were, but I might have started to feel better and gradually had the energy to increasingly take care of me instead of doing stuff that robbed me of my dignity. Thankfully I started soothing in a healthier manner. I also stopped looking for validation that ‘she’ wasn’t better than me and stopped chasing him for his ‘relationship debt’. Sometimes you’ve got to know when to wind your neck in and admit that it’s time to fold. I thought the sky would fall down in admitting a ‘mistake’ – avoiding admitting it was literally draining the life out of me.

When you initially break up with someone or decide to change a habit, you need a lot more willpower to resist the urge and to resist the temptation.

When you embark on No Contact, those first few weeks are basically about practicing the resistance to overcome temptation and learning to sit through your feelings. It’s also about finding alternative solutions to current or previous challenges that you’ve tended to look to your ex to ‘resolve’.

With plenty of repetition while at the same time supporting what you’re doing by making a commitment (validating your decision and making a resolution), eliminating and minimising opportunities for contact and almost distracting you with other aspects of your life, the days and then weeks start to add up where it starts to feel a bit easier, even though there are some days you will find harder than others.

Some people like to ‘dabble’ so rather than eliminate / minimise opportunities for temptation to be tested (e.g. defriending on Facebook), they think that they can put it right in front of them and not really make any changes and just try to stare down temptation. Sure some people can do this type of thing, but most people find it hard to give up chocolate when it’s sitting in their kitchen cupboard, so I’m not sure how one can think that they can cut contact but then field texts, emails, calls, and stuff popping up on Facebook!

Some days you’ll win, some days you’ll lose, but you stay the course and overall you start to feel you moving forward and feeling better, even though you’re still hurting.

I’ve helped enough people through NC to know that it’s pretty damn difficult to have any success at it if you go from being in a relationship where you made everything about them, to going through a breakup where you’re still making everything about them because you don’t know what to be or do with yourself outside of a relationship. If you opt out of a relationship NC or not, and you typically neglect you and are in fact heavily reliant on another party for your identity, you can be damn sure that you’ll be fighting off the urge to put your hand in the fire because you’re giving you less attention than what someone who isn’t around is giving you.

Instead of feeling bad about saying NO to them, start looking at it as saying YES to you, even if at its most basic, you’re saying YES to knowing that you deserve better.

Part of changing habits is incorporating self-support into it, even if that’s a new habit you have to learn as part of the process because anything else feels like torment and punishment. You will find it a hell of a lot easier to make change if a significant portion of your energy isn’t being used to resist and undermine you.

There is something else that is often forgotten: when you begin to face down challenges and put your self-esteem front and centre of what you’re doing, it increases your confidence but you will also find that due to validation that you have your own back, you end up also being left with more energy to take care of you and to move your life forward.

Why we’re attracted to emotionally unavailable partners who are like our parents (part 1): The One W...
Love isn’t a reward for being a good person, and we don’t like this
Excerpt from The No Contact Rule: Getting Trapped By Your Own Feelings