Future Faking is partly about using intentions to enhance self-image 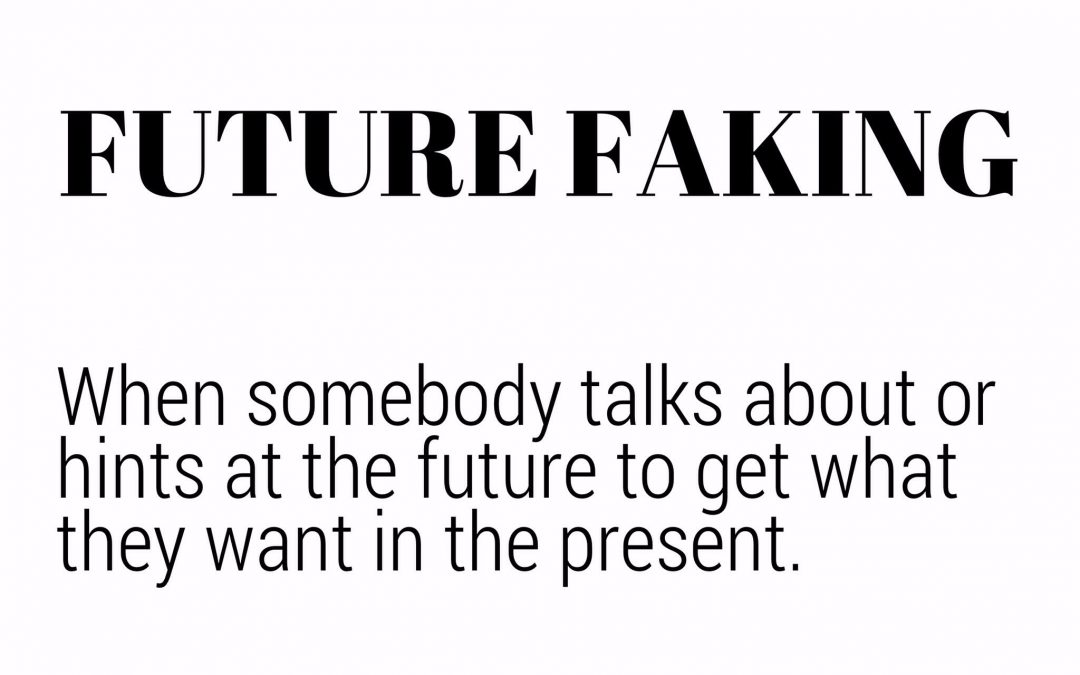 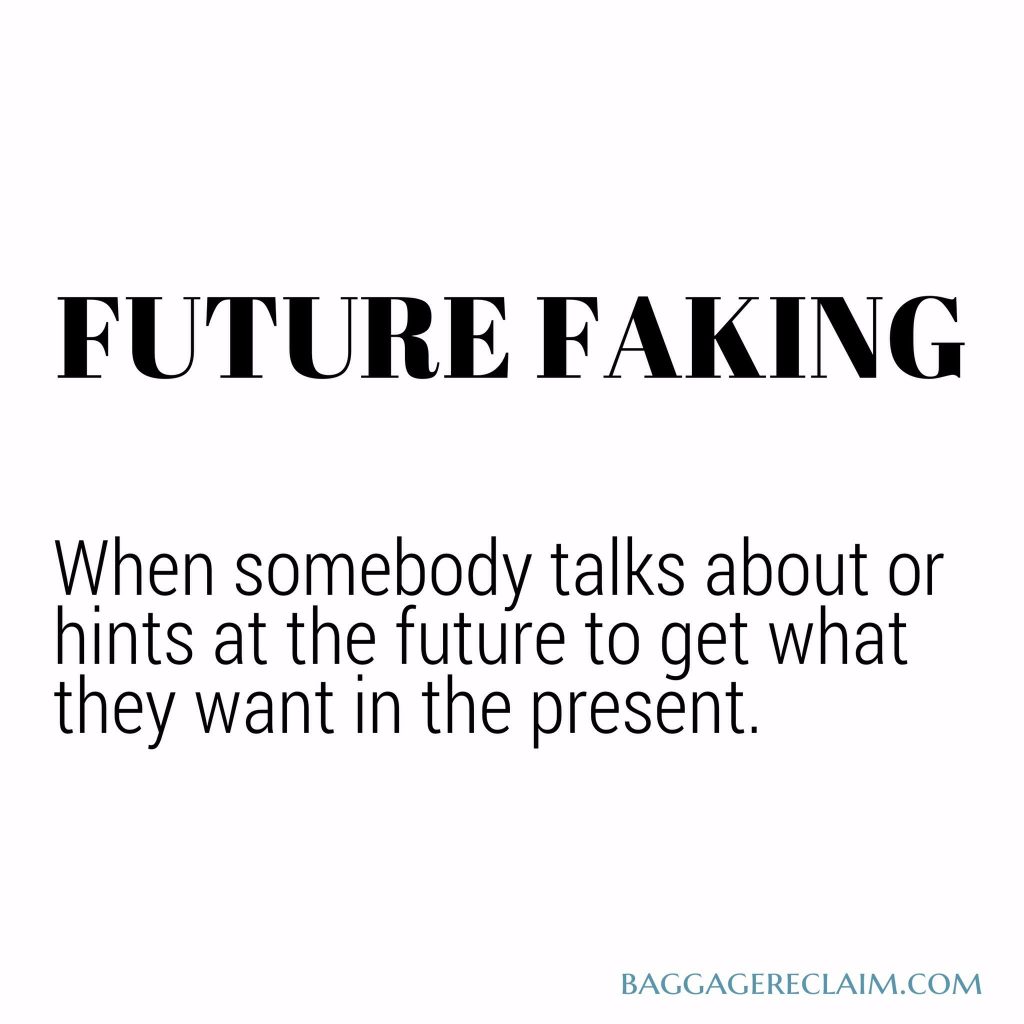 One of the most popular subjects on Baggage Reclaim is the area of when people overestimate their capacity to be or do something, or overestimate their level of interest. When done habitually whether it’s with one person or across several relationships, it’s called Future Faking – talking about and even amping up the future to get what you want in the present.

Some people bestow time, effort, and emotions. Some people bestow future talk – gets the same result, possibly even more in record time plus they may not even have to be around for when the future rolls around.

Future Faking is bedmates with the people-pleasing habit of telling people what they want to hear. We’re all guilty of the latter at times but when we do it on the regular, we’ve become adrift not just from who we are but also from what we know that we’re actually going to do.  We’re also being far too short-term. If we were truly thinking beyond the moment and not enjoying the flattery of their reaction, we might think a bit harder about the expectations that we’re creating and even any commitments that we’re making.

We’re getting high on our supply of a dreamy future.

Let’s be real – it’s a magic bullet that’s got many of us into bed far quicker than we’d intended, got us back into a relationship best left in the past, and has even gotten us to part with our money.

While some people Future Fake and tell people what they want to hear out of shadiness, what most people who do this are, is guilty of enjoying the feeling of having pleased someone.

When we find ourselves being shortchanged due to someone being more talk than action, rather than attacking our worth and checking through the mental CCTV to try to work out where we screwed up to provoke this person into not following through, what we should be looking at is what type of role was this person playing?

As I was thinking about the numerous tales of men and women left feeling confused as to why a Mr or Miss Unavailable Future Faked and told them what they wanted to hear, it occurred to me that all of this chit-chat (read: ‘well intentioned’ bullshit) allowed them to dine out on the part of Mr or Miss Available without actually having to truly risk. They could playact at commitment without actually being committed and enjoy all of the trappings that come with expressing these sentiments without actually having to live these sentiments.

In their minds, talking about commitment is as good as making the commitment.

They actually expect to feel committed and for the commitment actions to manifest themselves without their full input.

Even though they didn’t truly deliver on the actions end of things (remember that somebody who is commitment-resistant will feel like something basic is a mega effort), in their minds, just thinking about extending themselves and playing this show out in their minds and in what we didn’t realise was the preamble to them getting cold feet and pulling the plug, was commitment.

If it didn’t work out in their mind, if they’re not feeling compelled by another person to break ther typical habit, they write off the possibilities, press the Reset Button, and then lather, rinse, repeat with the next person. This also further distorts their self-image and general perception of past events because they focus on recalling how they made people feel good, not on how not following through caused pain and confusion. It’s for these very reasons why they may return to their exes and keep a foothold in their lives – they remember how good these people felt albeit temporarily and want to recoup that feeling. Then they’ll be offski again when they disappoint or revert to acting up, and yet still reminding themselves of how they look on a good future talking day…

Eventually there will come a time when even they don’t quite believe their own hype and of course, there’s only so many times that they can blame their usual excuses before even they can’t escape their own BS.

When somebody Future Fakes you or tells you what you want to hear, it’s all in the moment stuff so in reality, what they’re saying has a short shelf life because if you’re conscious, aware, and present and so not driven primarily by the short-term, you will notice very quickly that the chit-chat doesn’t stack up. The easiest way to minimise how much you are caught out by this malarkey is to reduce your own telling people what they want to hear. You won’t enter into things verbally on the basis of feeling good due to temporarily having made someone feel good (even though you’re going to let them down in the future or feel bad about what you’ve obligated yourself to). You will also be more focused on feeling good as a result of matching words and actions.

Fear of sacrifice, fear of commitment
Podcast Ep. 26: Just Not That Into You Or Unavailable?, Super Late, 'Overnight Success'
Fixer Upper