Excerpt from Mr Unavailable & the Fallback Girl 2nd edition: He Keeps a Foothold in Your Life 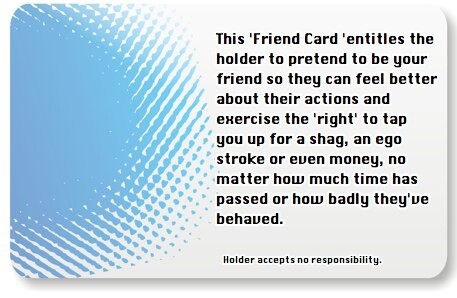 Mr Unavailable and the Fallback Girl is now available in print – yay – so I thought it was high time I shared an excerpt from this completely rewritten edition. In the chapter, He Keeps a Foothold in Your Life, I explain how playing the ‘Friend Card’ and popping up from time to time in your life no matter how long you’ve been apart can make it difficult for you to move on. As many of you have already discovered, it can be very tricky to shake someone with the tenacity of a cockroach after a nuclear bomb out of your life when they’re determined to keep you as a rainy day option in their back pocket…

Let’s cut straight to the chase – he can’t keep control of you and maintain The Status Quo (his comfort zone) outside of the relationship if he doesn’t have a foot in your life and is unsure of your interest. He’s all about his comfort zone, so aside from having a comfort zone for when you’re involved, he equally has one for when you’re no longer together. In his mind, you’re either going to be together on his terms or apart on his terms. As a result, he’s quite frankly a pain in the bum.

From pushing the ‘Friend Card’, to poking around in your life, to chasing you for contact, attention, and even sex, he’s devised a number of means to attempt to maintain control even when the relationship is over. He can’t commit – whether it’s to being with you or leaving you the hell alone – so he’s ensuring that you’re an option should he change his mind or have a use for you, while feeding his ego with the security of what he perceives as your affections for him. He’s rarely upfront about this so of course this wreaks havoc in the lives of any and all Fallback Girls that give him the time of day.

The moment that you appear to be moving on is when he’ll home in on you, blow hot, and set you back ten steps. You’ll readily accept his offer of his friendship because you don’t want to let go either and you keep reminding yourself how he’s so nice, what great qualities he has, and how ‘connected’ you are, and how he’s so like your soulmate except for the small problem of him being emotionally unavailable and unable to commit. Let’s just cut to the chase:

He’s not your friend and he exploits an innate human desire to be perceived as being friend-worthy.

When he suggests that you should be friends or comes back and dangles the ‘Friend Card’ when he’s trying to squeeze his way into your life on lesser terms, it’s because if you won’t give him the time of day, let alone your friendship, aside from the fact that it will be very tricky for him to keep a foot in your life, you not being his friend communicates that he might not be as ‘wonderful’ or ‘innocent’ as he believes.

There’s a universal belief that if someone is still prepared to be your friend after you’ve broken up, it means you’re a good person. Securing friendship and respect, even if it’s undeserved, becomes of paramount importance. What he’s failed to realise is that these are things that are earned and if he’s that bloody concerned with being perceived as hurting or wronging someone, it’s about time he sought for his actions to reflect this.

You know when he asks to be friends after the breakup and you don’t hear from him for a while? It’s because, in you saying YES he’s secured enough of an ego stroke that he only sees the need to get in touch with you to check that it still stands.

You know when he pesters you about hanging out, catching up, or whatever to show that you’re ‘friends’ and then you agree and he suddenly goes ‘dark’ or the arrangement falls through? He secured enough of an ego stroke through your agreement that he sees no further use for you. For now.

You know when he badgers you to understand things from his perspective or for your forgiveness, only for him to go off and mistreat you again? It’s because he’s gained what he wants – forgiveness – so the slate’s been wiped clean. Even though he may do more stuff to piss you off, in his mind you’re ‘friends’.

The truth is: only people who are undeserving of your friendship have to badger, railroad, and guilt you into being their friend. If they were someone who acted with love, care, trust, and respect, they’d have a relative comfort in knowing they acted well enough that there is a possibility of friendship, but they equally would respect your need for space and not assume that they have a right to your friendship.

It’s easier to keep in touch with minimal effort, and with so many of us sharing aspects of our lives online that often link us to mutual friends and acquaintances, it has never been so easy for someone to poke around in our lives.

When he’s in ‘investigative mode’, he’s looking for clues either from you or third party sources that 1) you haven’t moved on, 2) you’re still the person he thought you were, and 3) that you’re still an option. Unfortunately, as Fallback Girls, we’re inclined to see poking around as something flattering – we think it’s a reflection of his feelings and inability to resist us. Be under no illusions – he’s poking around to maintain The Status Quo. Nothing more, nothing less.

Equally, he may have got confirmation that you’re still an option from you.

When you get the frenzied poking around, where he’s calling, showing up at your work or home, etc., it’s highly likely it’s because you’re not responding to any of these, or have responded in a drastically negative manner, and he hasn’t found third-party means to confirm your interest. While for a lot of Mr Unavailables even a very negative response is still attention in their eyes, for some, a very negative response will trigger that out-of-control sensation, and – yep, you guessed it – they start pursuing you, thinking they want to get back together, Future Faking etc. If you eventually move from very negative to positive again, which confirms your interest and validates their ego, they’ll bail or turn into Mr Not So Interested.

Reader Question: What do you mean we teach people how to treat us in relationships?
12 Empowering Thoughts for Valentines Day
Why Is He Calling Me? What type of vibes am I giving off?