How can they keep doing what they know will hurt us? 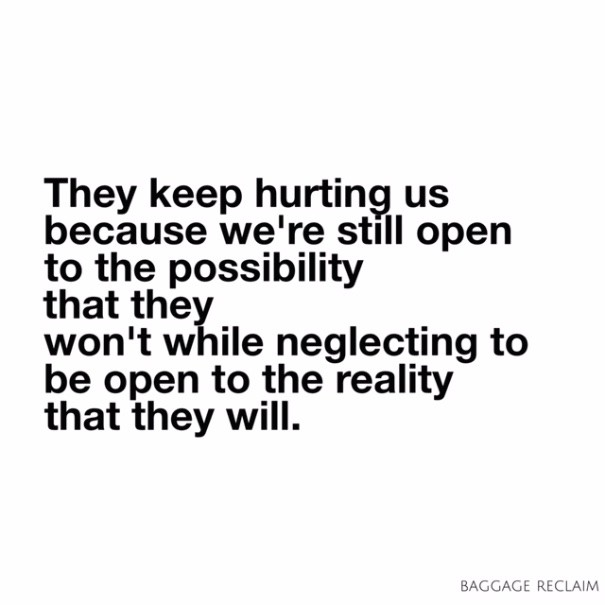 Some of us find it really hard to imagine hurting someone and if we were to find ourselves in this unimaginable position, we’d feel terrible about it. It would play on our mind, we’d be desperate to express remorse, to begin to make amends, to show how what has occurred isn’t a character defect but some ill-chosen words or actions on our part that we feel terribly regretful about. This is why it’s utterly baffling to us when we have shown kindness, decency, love, compassion, tolerance and more for somebody, that they wouldn’t think twice about doing the very things that they know causes us pain. It beggars belief that they would re-enter our life after the last round of pain, with the same or even worse intentions than the last time. It’s like, Aren’t I worth a genuine, thought-out explanation? Where’s your conscience? When exactly are you going to feel enough remorse that you’d either be a better person or at least jog along and spare me any further pain?

We imagine that if someone knew that we were in love with them and that we wanted commitment and basically more than the crumbs that they offered before, that if they came back, it’s because they’re ready to come good. I mean, come on now– why are you here inviting me out, hounding me with texts, talking about moving in or how no one makes you feel like I do, if all you’re going to do is turn me inside out with pain?

We imagine that someone who has repeatedly disappointed us thinks, OK, I need to leave him/her alone. I can’t keep hurting this person.

We struggle to imagine why our feelings are used as a weapon against us.

There’s a certain type of person out there that mistakes the niceness that we pride ourselves on and yes, even our fear of confrontation and our desire to see the best in people, for a vulnerability to be exploited. They spot that we want to please, that maybe we’re a little (or a lot) unsure of ourselves, that we’ll be like a puppy kicked across the room if we sense criticism never mind experience it, and that we’re also missing a level of validation. They know that we want to be loved and they take us for granted.

They know that because we don’t like to make waves, that we’re caught between a rock and a hard place when they say all of the right things and hint at the future, because we don’t want to look as if we’re being ‘immature’ or ‘unforgiving’ by referencing what went on before. We worry about looking ‘rude’ and causing upset, so we feel obliged to press the reset button. We gamble our hopes yet again rather than question things. We hope that they will give us the dream so that we don’t ever have to face the truth and make uncomfortable but necessary changes that would spell the end of this person having a place in our life.

We admittedly do get a bit blinkered because we’re using our own moral outlook as a frame of reference to determine our expectations of that person rather than as a statement of our values that highlights the discrepancy with theirs.

We also try to take the higher road, seeing where a person is coming from and recognising what’s behind their behaviour. The problem with this is that because they don’t have that self-awareness or recognise and appreciate the empathy that we extend them, being understanding comes back to bite in a big way because they are not experiencing any true, natural consequences. They think they’re golden. They even think that it’s us who’s the problem and won’t take any responsibility for their part. We’ve fallen into the over-empathy trap.

All of a sudden we realise that we must stop being so in the moment with this person and getting sucked into their latest reset button press and hype. We realise that we do not need to give up our positive qualities but we certainly need to be more discerning and definitely a hell of a lot more boundaried.

There’s a two-fold problem when a person keeps hurting and disappointing us:

1) That they lack the pride, integrity, empathy, and compassion to recognise their own actions and their impact on others. They see people as a means to an end.

2) That we’re still giving them the space and opportunity and as such, are remaining open to the possibility of being hurt and disappointed some more.

No matter how much we try to please and love, we cannot influence or even control that person into doing better. All we’ll effectively end up doing is hurting us in the process and then trying to make them repay the debt created by our people pleasing.

What we can change is how much pain we’re in and how much more we are exposed to this type of carry-on.

I know from personal experience how comfortable it is to complain about someone’s treatment and to at the same time, keep denying, rationalising and minimising my way into being open to a repeat because I’m thinking that they must surely know that they’ve exhausted their line of credit and how hurtful it would be.

The reality is that some people hurt us and are not fully aware of how much because we shelter them from their actions and so they don’t experience natural consequences. We keep telling them how much we love them and chasing them about so to them, they still think that we’re good to go.

There are also some people who choose not to be aware. No matter how badly they behave, they’re never at fault and if anything, they’re the ‘victims’ of us calling them out on their actions or not being perfect all of the time and withstanding whatever crumbs and treatment they were throwing us.

Some people know and keep saying sorry and then it’s lather, rinse, repeat. It’s like, “Stop telling me you’re sorry and start living it!”

The fact is though, we know that we’ve been hurt and actually, we must stop treating the people who hurt us like overgrown babies. We must stop playing down our pain and whitewashing their behaviour. There’s no point in them going on about what they intended; it’s time to start talking about what has resulted.

Whether they’re family, romantic partners or whoever, what can be an underlying desire to be liked at all costs and the niceness and fear of confrontation that comes with that, can and will be used against us if we don’t recognise that some people do not have our best interests at heart because quite simply, they’re all about themselves.

We don’t have to go to war but we do need to recognise that being nice never meant being silent and never standing up for ourselves. We must draw our line because this is how they will know how much they have hurt and impacted us.

We need to be thankful that we care, that we empathise, that we want to do good and yes, that we want to give love. We need to be thankful that we want to do better and that it bothers us when we are wronged or when we err. Some people don’t give a damn and dislike themselves so much and see everything in terms of what can be gotten. Instead of craving what they don’t have to give and wondering why we can’t make them into who we want or be The Chosen One, we need to realise how much it must suck to be in their head. Instead of wondering if the next guy or woman is going to get a better them, we need to give a thought not just to all who came before us but also who is yet to be hurt by them. At least we’re out of it now, if we choose to be.

As we move through life on to happier times (and we will if we stop clinging to pain), those times when we hurt someone will still pop into our thoughts from time to time. It’s called having a conscience and life. Hopefully rather than still beating us up, the experience has helped us to grow as a person and to continue to try to do our best, to think of others but to also know that things won’t go perfectly and that at times, it’s gonna be painful. The fact that we care that much though, ends up being our strength and the anchor from which our integrity and loving relationships are all hitched to. We know that we’ll love more than we pain others.

Podcast Ep. 219: You Are Allowed To Rest
Are you faking it? Why you shouldn't waste your time faking orgasms?
'Is He Different With Her? Why Did He Choose Her Instead of Me?' - When You’re Not The One (or they ...