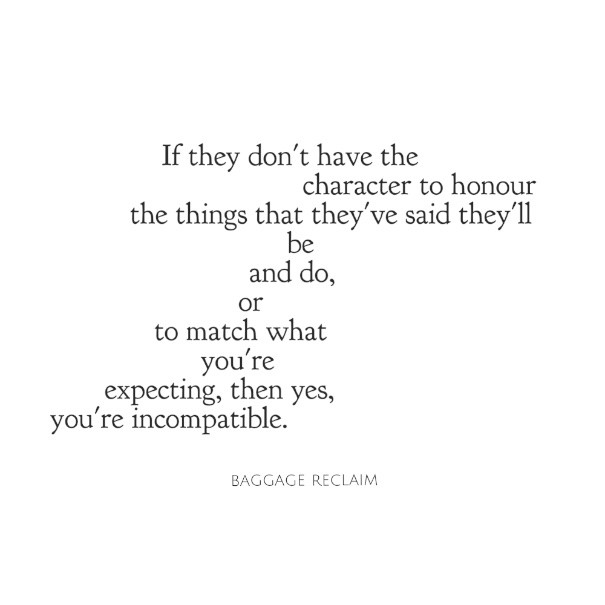 A few months back while creating a class for one of my courses, I decided to conduct an experiment on me and note what I used to look for in a partner and the list…. was short and very embarrassing. Good looking but not a necessity if they 1) pursued me hard and/or 2) made me laugh, as well as tall, intelligent, good job, gives me the butterflies which admittedly seemed to be generated by them needing to be something else – ambiguous in some way – which no doubt left plenty of room for my imagination to run riot. That was pretty much it.

None of these things said anything about the character of the person or even what they would share with me in the direction of a relationship, which explains why my relationships were a hot mess that left me perplexed at why I wasn’t happy with my ‘type’ while at the same time I became very good at silencing that inner voice that kept piping up with evidence of real concerns.

It never occurred to me to consider these things because I didn’t really like or love me and a lot of what I sought in others was really about the surface things that I could appreciate in me.

We can be attracted to and like people for any damn reason we like but they won’t all hold up off paper. If we’re going to make value judgments about people driven by making assumptions, if we’re not going to dig too deep and are essentially going to be led by our vaginas / penises and our Zsa Zsa Zu internal butterfly and firework machines which we expect to do the detective work and act as People Pickers with quality assurance responsibilities, we have to realise that we’re going to keep coming up against the painful outcomes that these actions and mentalities bring.

All of this stuff is powered by unhealthy/unrealistic beliefs that we use to attach meaning to the things that we’re attracted to. We see qualities, characteristics and certain values and our minds leap ahead and assume the presence of ‘everything else’ that we think that someone who has the former will be.

Values are about what you believe that you need in order to live your life authentically. We are at our happiest when we’re living congruently with our own values instead of busting them up in an attempt to live other people’s values.

You may be compatible with someone in terms of appearance, attraction, common interests and how they can make your body sing but, if you don’t share core values which would reflect the way that you each want to live as well as having a common / compatible direction, you’re incompatible. It means that you have the secondary values without the core primary values and the former only carry weight when the latter exist. Core value issues is a deal breaker.

However it doesn’t stop there.

Sometimes you do appear to share core values with someone – it appears that you share similar relationship / economic / social (how you see the world) / religious values etc., and yet you’re unhappy and the relationship may even be quite unhealthy. Why? Because you don’t share personal values which are the values that say who you are – your character.

And yes, sometimes you share personal values with someone but they don’t want the same things – you diverge on other core values – and this makes you incompatible. You end up thinking “But we’re so similar!” but you’re not going out with a clone of you and they’re allowed to have a different direction.

Values and character are self-evident so there’s no need for the projection of assumptions and potential. Of course… it just depends on what you’re looking for or what you’re blinded to.

Ultimately someone may possess the values that you think you need in order to have the relationship you want, but somewhere along the way, you’re incompatible and possibly blinded by the existence of other stuff that you may be using to minimise the significance of the incompatibility.

Personal values trump everything so you can like or love someone for whatever reasons you feel like, but if they don’t have the character to honour the things that they’ve said they’ll be and do or to match what you’re expecting from them, then yes you’re incompatible. This doesn’t mean that you cannot look for whatever it is that you look for in people but it’s time to look for and value character and value it based on consistent evidence and experience, not jumping to conclusions about what people ‘like you’ or what people who do X,Y,Z ‘should’ be or do.

Forget this hinting malarkey. I'm going all the way.
Relationships in a Nutshell: Co-pilots, drivers, passengers and the importance of a joint agenda
In Search of Fireworks: Chasing that Special Spark
Share this...