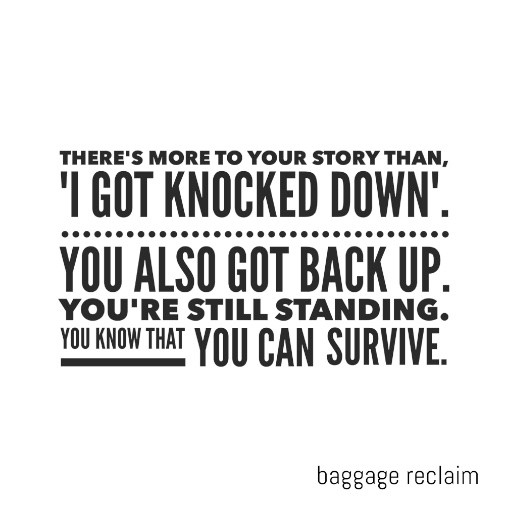 There’s this falsehood that many people who are in the process of improving their self-esteem, addressing unhealthy or redundant habits, or who are thinking about doing any of these things, subscribe to, and it’s this idea that once we tackle whatever it is that we think has held us back and even “grow up” as such, that we will not be knocked by things anymore. We believe that once we do what we feel that we need to, that we won’t be put to the test. But, how would we know that we have the courage to deal with things and how would we know the length and breadth of what we’ve learned, unless these on-the-job training lessons are put to the test on occasion?

In the almost ten years since I embarked on my own personal journey of learning to like and love me as well as starting Baggage Reclaim, I’ve thought that I’m “finally” a grownup on a number occasions due to coming out of the other side of deeply testing situations. I think on some level, for a time I believed that once I had some experience under my belt of having improved self-esteem, I was never going to be ‘back there’ but if life has taught me anything in recent years, it’s that a lot of what I’ve learned along the way has prepared me for facing adversity such as different major stresses I’ve experienced with both of my parents, grieving the loss of my relationship with my father and his family, and having to face down experiences that had the potential to bring up those fears of rejection, failure, and even success.

Each time I’ve been put in testing situations, I’ve had to figure out through trial and error as well as my existing bank of self-knowledge, how to get back up.

Each testing experience, I’ve come out of it thinking, “OK – yeah, I’ve definitely grown up now”, and then down the line, something else happens and it’s, “Jaysus! Now I’ve grown up”. It reminds me of when after each breakup and disappointment, I’d think (and often say) that I’d “never get over this”.

For the majority of my life, a lot of my story was “I got knocked down” but over the last decade it’s changed to, “I’m still standing” or “I got back up”.

If I think about one of those experiences and I begin turning over the chain of events and as such, whipping me up, I end up, if not retraumatising me (which is more what I used to do years before), I certainly relive the events and then if I get carried away (which we can when we’re not mindful and are experiencing some form of stress), I end up having to deal with the hurt brought on from going down that road.

Sometimes we forget that we’re still standing or that at the very least, we’re in the process of getting back up.

We may have experienced abandonment, neglect, bullying, bereavements and other losses, knocks, disappointments, unrequited feelings, betrayals and more, but we are still standing. We are still here.

Our parents may not have been who we would have ideally wanted them to be or parented us as adequately as we might have desired but, we are still standing. When I think of all the things that have gone on in my own family never mind in my adult life, I realise that part of what makes me who I am is what I’ve been through, what I’ve had to survive, what I’ve had to navigate, figure out, step away from and more.

Isn’t it time that we stop thinking of ourselves as “weak”?

I hear from so many people who believe that they’re “weak” for having gotten into a situation or being attracted to a person but we must remember, it actually takes a lot of courage to become acquainted with the truth and learn from it. It takes courage to take experiences and use these as a light to open up our awareness about where we need to adapt our behaviour.

Baggage Reclaim would not be Baggage Reclaim if my story was, Once upon a time, there was a little girl who was perfect, her parents were perfect, life was perfect and she went on to experience everything her heart desires. The end.

There’s no frickin way on earth that I would choose the things that I’ve been through for my own daughters and I’m not about to break into a jubilant moonwalk, but no longer wanting to (whether it was consciously or not) live my life under a narrative cloud of negativity due to defining me, my present and my future by virtue of my background, experiences etc, I’ve been able to look at me in another way and live.

There’s still this little girl within me that experienced abandonment and pain. If I think of me as a kid, I see me, sitting in a hospital ward staring out the window knowing that my father would not be coming and feeling utter desolation. Sometimes I see me all dressed up and ready to be picked up….and it not happening. I decided my fate when I was a child and one of the things that I’m thankful for is that I’ve allowed me to grow up so that I can accept a different version of events and love the me that I was then and the me I am now.

My story cannot be, I got knocked down.

I still have the same parents, the same family, the same exes (I must tell the story of that time when a friend tells me about her shiny new semi-boyfriend and it turns out to be one of my ex’s – haha), the same experiences and the same old wounds but ya know what? I’m still standing. I could talk about those experiences and how awful they were but if I were to only focus on that and ignore the recovery, the growth, the insight, it would be the story of when I got knocked down and forgot that I survived.

We are survivors and hell, sometimes, I am in awe of the stories readers share with me, because there are some serious warriors amongst us.

Looking back, I’ve had some damn close calls. I used to shame and terrorise myself over the fact that I had those close calls and as a result, it began to feel as if I was still in the midst of one. What’s the point of that? It would be similar to nearly getting killed by a car and rather than learn from that experience and eventually get to that point of gratitude for still being alive, instead continuing to mentally beat you up for the near miss and deciding that your options are limited as a result. I’ve had some major blows but due to recovery, they’re in the remote distance, not on me like a black cloud. They’re something that happened, not that’s happening. This is good because until ten years, abandonment and being “worthless and good for nothing” was a story I lived every day as if it happened the day before.

Some of us get into the habit of feeling like underdogs, the odd ones out, the ‘unsaleables’ and often it’s because of who we were born to or where we born, or experiences we’ve had or ‘mistakes’ we’ve made along the way. That’s not fair. We can’t keep defining ourselves in this way. That charmed life we sometimes secretly wish for, was never going to grow us and strengthen us. Maybe it’s time for us to use these experiences in a different way because all of these experiences, carry illuminating positive lessons that when we heed them, we will not keep getting burnt by the same pattern over and over again. We will also know the length and breadth of our courage and know that when life puts us to the test again, as inevitably does, we are that much more equipped to not only deal with it but to also gradually bounce back.

Never Judge You Based On A Perspective Gained From Being Treated In a Less Than Manner
Do we really need to explain why someone's actions bothered us? Yes, sometimes....even if it's just ...
12 Empowering Thoughts for Valentines Day