It’s What Comes After The “But…” That Counts 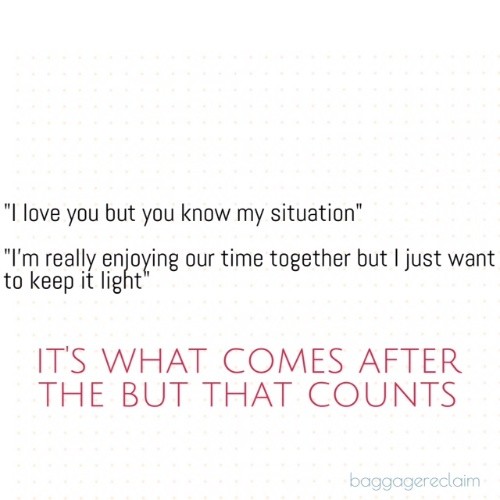 I love you, but you know my situation.

I hear you, but that’s not something that I can do.

I’m really enjoying our time together, but I just want to keep it light.

I do like myself, but I do give myself a very hard time.

I want to change, but I think it’s too late.

Look, I really like you, but I’m still coming to term with my separation.

I know a few people who say “It’s what comes after the but that counts” (woolly hat tip to BR reader Grace included). Remembering that nugget of advice keeps you out of a lot of trouble. It ensures that you’re present enough to listen to what people say, not just listen to half a sentence and then drifting off into a fluffy fantasy.

It’s what comes after the but that counts because it’s where the truth or our energy lies.

In so many of the stories people share where they emphasise how much their ex or partner loves them or really wants to do something because they kept saying it, there’s a “but”. Their exes or partners also kept saying “But I can’t do this”, “But I’m not that”, “But you this and you that.”

People with excessive use of “but” (cough) give with one hand and take away with the other. This basically brings you back to their status quo.

Many a person has had their expectations managed down by clever use of “but”.

“But…” doesn’t necessarily mean that the person is ‘shady’ though. We communicate who we are through what we say and do, and also what we don’t say and do. No matter how much of a good game we talk, we just can’t help but show people who we are. It’s self-evident. We have “tells,” and yes, we say stuff that completely contradicts something else we’ve said. Our jobs as individuals are to be naturally listening and watching as part of being in reality.

Judging by the number of emails and comments on Future Faking ever since I first wrote about it, we pay too much attention to words we want to hear. It’s what keeps us invested even when there’s a lack of action to support them. We feel very flattered, causing us to tune out of ‘content’ that’s not on that ‘frequency’ or ‘on message’.

For instance, it’s easy to focus on “I love you”. What you should be focusing on, though, is what came after the but, like reminding you of their situation/limitations. These “buts” put a cap on the extent of their feelings and any actions you might expect to show up with that love.

If you tell me that you love me, I’m kinda expecting the loving action and a loving relationship to come with. It’s a package deal.

I love when people say “I agree with you but…” because that’s when you need to pay very close attention. Again, it doesn’t have to be something shady but the person may have an objection that impacts your expectations or the “but” may highlight a real difference in values.

There’s also, “I want that too but…” We can be unwittingly letting ourselves off the hook if what we put after the but is our fears or firmly held beliefs that govern our capabilities.

This means that you need to make sure that you’re changing your intent and supporting the decisions you make and the actions that follow by putting your fears etc., BEFORE the “but”.

And then say something positive that reaffirms your intentions, commitment, motivations etc., AFTER the “but”.

“I’m afraid that they might change after I’ve needed it but I know based on X months/years and/or various experiences, and this is what I have to make a decision on–who they are, not who I want them to be.”

Or just make sure that wherever there’s a “but”, that positive intentions or positive self-validation comes after and ends your statement. And yes, sometimes they have to take their overused “but” and jog on.

Dropping the illusion of words to be action focused in your relationships
10 Signs That A Guy Wants You Just For Sex
It's Just Cake: Why you should be careful of reading too much into things