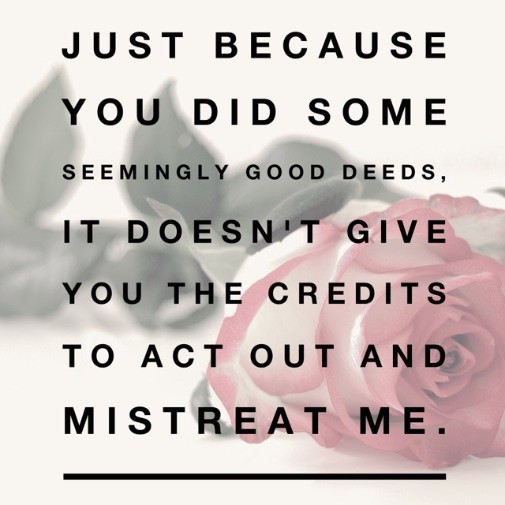 Have you ever been on the best date ever or best few dates ever, only to be unceremoniously blanked afterwards despite promises of another date? This person wanted to leave you with a really good impression and fill you up with good feelings and memories so that when you didn’t hear from them again, they could move on with a clear conscience.

Some people extend this beyond dates and devote their energies to trying to come out smelling of roses when really, it’s Eau de Bullsh*t (BS). It doesn’t matter whether it’s months or years; they engage in compartmentalisation and image management activities that appear to put them in a good light.

They’re masters of abrupt endings of what are often believed (by outsiders and even their partners), to be near “perfect” relationships.

Holding back their concerns or their secret ambivalence, you’re invariably ambushed by their announcement (if you get one) and their exit, all while insisting that there’s no one else (even though there is).

The exit can be so fast and in such a way that it can be tricky to get answers to burning questions. If they dignify a conversation, it’ll be poetic and nostalgic smoke and mirrors, possibly reminding you how amazing you are and how they’ve been so happy in the relationship (So why the eff are you leaving me then?, you wonder). Or, you’re met with such an alarmingly level of coldness that you wonder if they’ve experienced a knock to the head. They might even sleep with you, take you out to dinner or even on a fancy holiday, to let you down gently…

You may be brokenhearted while singing their praises even when others aren’t. It can be uncomfortable to admit that you may have felt flattered or even very grateful, that somebody “like them” had ‘chosen’ you, that you don’t know how entrenched you are in their image.

This image management and compartmentalisation malarkey is at the dubious end of people pleasing, which on the whole is about trying to influence and control people’s feelings and behaviour by attempting to cater to and satisfy what we perceive as other people’s needs, expectations, desires, feelings, and opinions, so that we can relieve tension and avoid conflict, criticism etc. You don’t see what’s coming because in their efforts to ‘look good’, they smile to your face, closely guard their innermost feelings and thoughts even when they contradict that outward appearance, and appear to be giving you ‘everything’, because they’re wearing a mask while telling you (or inferring) that it’s their face.

In their mind, they’re not going be “that guy” or “that woman”, you know, the one who’s cheating on their partner. They’re above that. They are doing it but it’s not cheating. It’s horizontal friendship or some other guff. They don’t want to be in the same camp as say, their own parent/caregiver or even yours, so they pad out what they’re doing with all of this puffing you up and sheltering you from the truth.

They carefully manage their image and their exit with what they feel are their various “good deeds”, all with the underlying expectation that when they make their exit, they have enough pleasing credits in the bank to prevent questioning of their image. It’s like, “Well I gave them a good time right up until the end didn’t I?” The truth becomes irrelevant.

They also use those same credits to justify why they don’t want to try and salvage things – the “good deeds” were in lieu of actually discussing or resolving issues. They think they’ve done more than enough.

They’ve come up with a set of conditions under which they feel they they’re “OK”. This is their benchmark of supposed rightness and decency. Each time their conscience pricks, they remember their “good deeds” (or what they feel that they could have done that would be worse).

They believe they’re controlling the uncontrollable and have failed to account for the fact that 1) people have feelings, that 2) regardless of intentions, there are unintended consequences, and that 3) even if they’ve done everything possible to build up credits and hide any misdeeds, they invariably come out.

They refuse to accept that they’re bang out of order or certainly that their image isn’t what they fight so hard to preserve because it could challenge their perception, not just of this relationship but of every relationship and experience that they’ve used this image to avoid taking responsibility and being accountable.

It doesn’t matter if you don’t agree with those conditions or whether it’s evident that you’re more impacted than they predicted; from their end, they feel off the hook and can display an alarming lack of sensitivity.

That person who you suspected that they were involved with, is often the one they’re whirling around town with claiming that they’re “just friends”. What’s also quite fascinating is that sometimes, when the truth starts to seep out, in order to make it now appear as if the dodgy deeds or the way in which things were handled was justifiable, there’s a haste to get engaged, pregnant, or make it known what a new and charmed life they’re leading. They’ll damn near do a PR exercise on their new partner so that the images match up to the story they tell themselves.

By effectively setting you up and ticking their boxes of what they feel is a decent partner, it can back you into a corner because you’re likely to speak highly of them in the initial aftermath (before the truth sinks in or becomes known), plus they’ve often charmed everyone from your friends to the person who does your gas meter reading. This often means that when they do show their insensitivity by flaunting their new partner and life a hot minute after the breakup or it comes to light that they were cheating or anything else dodgy, people struggle to call them out on it, with some near excusing it. “He/she is so funny, creative and yada yada yada that I guess they outgrew the relationship and needed to find someone who was more on their level” or shite like, “The heart can’t help what the heart wants”.

Because of the way they exited and basically greased everyone up along the way (including you), when you so much as make a slight mention of the sheer duplicity, some will jump to their defence and others will just choose to see you as “bitter”. You’re gossiped about and blamed for the demise of your relationship while they’re free to go.

And of course they are – they’ve had weeks or even months to set things up and to compartmentalise the hell out of what they’re thinking, feeling and doing. If you’d had the same heads up, you might too!

It’s when you recognise this, that you experience pangs of pain and frustration remembering those little niggles that you (or they) pushed aside, plus they often had a rigidness about some aspect of theirs and your life that looking back, it now fits with this newly forming picture of a person who says and does stuff in an image driven way. It doesn’t have to be lining up the towels and tinned goods like the 1991 film, Sleeping With The Enemy, but it might be as simple as a penchant for awkward unusable furniture, or only seeing your mutual friends in very specific circumstances that showcase them. They may have resisted conflict or insisted on you coming across a certain way.

They may have been more controlling than you were willing to admit.

When you look back, you can see signs that they’d checked out at a certain point or that they put up walls, and that even more importantly – and it may have crept up on you – you lost yourself along the way.

Just because someone tries very hard to come up smelling of roses, it doesn’t mean that it doesn’t smell like the BS that it is, to you (and to others).

It doesn’t mean that you have to write off the good times and you can certainly appreciate those times for what they were, but stop trying to be loyal to their persona and stop acting as if it was some sort of freak incident that a person “like them” was with you for a time and that you’ve lost your worth. Yes their behaviour is damn hurtful and downright frustrating but the truth will prevail (maybe not on your beat), but grieve the loss of this relationship, let the chips fall where they may, learn what you can from this experience, and do right by you by living your life well… authentically.

Do you have a Replacement Mentality?
Podcast Ep. 45: Why Did We Break UP? #3 - The Affair
Hooks: Understanding What THEY Think Hooks You To Them & the Relationship and How This Can Be Exploi...