Happy one day, chopped the next: When they break up and vanish 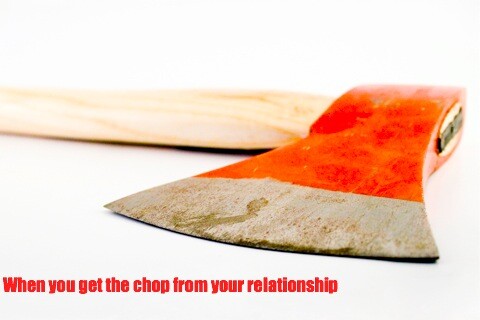 My friend was six weeks away from getting married when her fiance abruptly announced with no prior warning that he wanted out. Two weeks before he was writing ‘I love you’ in the condensation of the kitchen window and and then in one fell swoop, the wedding off, and he refused to explain, speak with or see her and cut her and all of their mutual friends out his life. She was devastated. She could accept that he didn’t want to get married but she just couldn’t fathom how he could cut her out so cruelly and offer no explanation. Around their wedding date, he forced himself to call…to tell her that he was seeing someone else, and that was only because he’d been seen all over town.

Reader Anne reconnected with an old flame from ten years ago. They’d always kept in touch and when she visited her home country, they got together. Emails, calls, texts, and plans (he said he wanted to get married next year) and promises followed and he booked a flight to visit her and they spoke right up to the night before. The big day arrived, he went dark, refused to speak to her and cut her off. The brief time they spoke he said “Life will go on with or without me”. When she called him another time, he hung up.

These are just two examples of a story that I’ve heard many times: When a relationship is abruptly ended, you’re cut off, there’s no explanation, nothing, and you wonder what you did and have to process the loss and closure alone. You feel duped, play the relationship back and search for the signs, but you ultimately end up blaming yourself. I guess it’s the relationship version of being told you’re doing great at your job and then being sacked or made redundant out of the blue with little or no explanation.

So here’s what I told my friend, Anne, and others in the same boat: People that break up by abruptly and rather aggressively cutting you off with little or no explanation and pretty much act like you never existed, have to do so to avoid any responsibility for the consequences of their actions and their impact on you so they can press The Reset Button.

Acknowledging even a fraction of their actions is to get drawn into acknowledging themselves and your feelings. They can literally pretend like you didn’t exist and tell themselves anything they like. It’s like ‘Get the consequences of my actions as far away from me as possible’.

They’re afraid that if they discuss, they’ll get talked into committing themselves to something they don’t want to.

They might even feel bad, or heaven forbid, remorse. They want out so badly, they have to sabotage your relationship in such an abominable way that it would make it difficult for them to go back (unless very brazen) or for you to think there was a chance. They safeguard themselves and avoid the commitments that they’ve made by sabotaging their way out and if they’re ‘lucky’, they’ll get a 2 for 1 deal and you’ll think it’s your fault.

The overwhelming likelihood is that they didn’t feel that there was a strong enough reason to pin on you so rather than admit they’re scared or they want out, they announce they’re out and cut off.

Sometimes people become stifled by a situation often of their own making, triggering anxiety and fears about being vulnerable, intimate and committed. Some like the idea of doing stuff more than the reality, and when the future they’ve often billy-bullshitted you and Future Faked about starts getting too close for comfort, they extricate themselves in a big way. They may genuinely have believed that they were going to be and do as they’d committed themselves to but if they were honest, they’d acknowledge that going out with a bang was always a ticking time bomb.

Many say and do what they think they should – going through the motions. My friend’s ex likely thought that he had to take ‘logical’ next steps without his heart being in it. She had enough pride to know that she wouldn’t have wanted to marry a reluctant groom but she did see his treatment as a reflection of her. Marsha feels the same but also recognises what a lucky escape she’s had even though she’s hurting a lot now.

Many years ago, I worked with a girl from Australia. One Thursday I listened to her boyfriend spend the entire evening professing his love. On the Tuesday he took her ice-skating and talked marriage. On the Thursday, he told her he didn’t love her and he’d met someone else, and added nothing else other than to tell her to get out and go back to Oz. Three days later she was gone.

Some are not the type to engage in an open and honest dialogue with you in the relationship. When they experience anxiety, their feelings change, there are problems etc, they may not say anything and then erupt out of the relationship like they have a hot poker up their bum. You might wonder what you could have done differently – unfortunately if someone’s way in over their head, you’re not going to know about it until they say or do something or you ask. Even then they may not tell you.

When someone can rip you out of your relationship and their life from one day to the next, and go all Jekyll and Hyde on you, while it’ll hurt like crazy now as it feels like no closure, you can’t decipher what was real and what wasn’t, and you don’t get why you don’t even deserve an explanation, you’ll eventually come to be thankful that you were spared from spending even a minute more in the company of someone that doesn’t play decent, never mind fair.

They’ve got all switchy on you because they’re very afraid of commitment and/or they want out but don’t know how to handle these situations with integrity. The pressure and the fear mounts and they panic or they’re the type that doesn’t voice concerns and problems, or solves their problems by lining up a new partner, which then creates the urgency to get shot of you.

Being scared doesn’t excuse their behaviour but it does along with their subsequent actions, tell you why a relationship with them isn’t an option. There’s no easy way to broach fears or endings and with them, you were going to get hurt anyway.

It would be great if they could respect you and the time you shared by dignifying you with an explanation and decent treatment, but they wouldn’t have ended it this way if that was ever going to be on offer. That…and they would have to explain about themselves and as they don’t want to know themselves and have that level of honesty, you’ll either be in for a long wait or some distorted version of events that will leave you with more questions than answers.

Don’t envy the next person because who knows what kind of switcheroo stuff they’ll be pulling there – they may have left a big hole in your life, but you can fill it with a better person and new hopes, dreams, and plans.

Relationship Amnesia - When you keep forgettting what's REALLY going on
More Videos: But We Have So Much In Common, Why is he calling when he doesn't want to get back toget...
Stop Ruminating. Stop Obsessing. Stop Over-Thinking. Very little is going to happen without ACTION.
Share this...