The Commitment Is in the Offing Ticking Time Bomb – Why do they back off when you reciprocate? 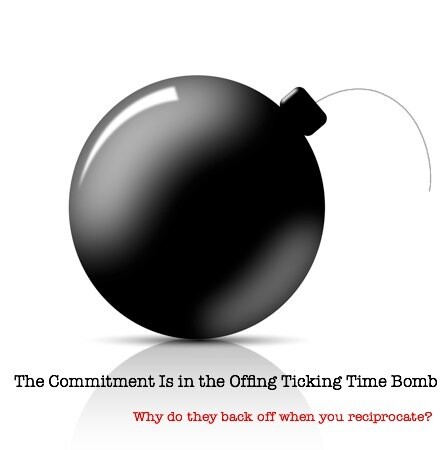 My inbox gets filled up with lots of questions and a recurrent theme is around the issue of being pursued. What many people don’t understand is why someone would go to the trouble of pursuing them if they’re only going to back off once you reciprocate?

The three most common situations I hear about:

Being guarded about dating because of previous hurts, meeting someone, them pursuing, dating them and expressing concerns about trusting, them reassuring and laying it on thick with a Future Faking and Fast Forwarding trowel, you drop your guard and shazam, it’s over or they back off sharply and start bleating about how they’re ‘not ready’ or ‘overwhelmed’.

Meeting someone, not necessarily expressing any concerns about trust, having a great time, them talking the future up and peppering the conversation with ‘plans’ and ‘hints’, and then as the relationship progresses and you start looking for more commitment and progression to match the claims, suddenly they’re gone, blowing cold or lukewarm, ‘not ready’ etc, or even calling you ‘needy’.

You meet someone, you go on what feels like an amazing date and may even go on a second and at a push a third, then all of a sudden…tumbleweeds. The next date you said you were going on doesn’t materialise, they’re not returning your texts, calls, or emails, and you’re taken aback. You wonder what you did or said.

There are three very important things you need to remember about pursuing that will keep you out of a lot of trouble and help you fundamentally understand how people that thrive on pursuing work and how you can unwittingly fuel the dynamic:

1) If you expect and have to be heavily pursued before you’ll ‘reciprocate’, you’re ripe for The Chaser, someone that loves the sprint, not the marathon.

People that expect to be heavily pursued tend to be guarded due to struggling with trust issues and fear about relationships. Unfortunately this reticence unwittingly acts as a red rag to a challenge loving bull. The Chaser thrives on uncertainty, not being in control, the unknown, proving you’re not who and what you say you are, and winning. While they might not literally think “I intend to unseat you”, this is actually the driver of their subsequent actions.

Your apparent disinterest or reluctance triggers curiosity and challenge which in turn causes them to overestimate their interest and capacity for a relationship.

The moment they feel in control which is normally when they sense that you’ve genuinely let your guard down and are not only reciprocating but expecting them be and do as they’ve claimed and showboated themselves to be, is the moment their desire erection wanes.

I know of so many women in particular, who’ve been caught out by Future Faking and Fast Forwarding it’s unreal. Most cannot comprehend, in spite of what in retrospect were some indicators that all was not well, why someone would pursue so intensely and basically chat the crap out of the future only to dump them.

Aside from those indicators that you may have ignored because you focused on their words, it’s important to realise this:

When someone resists commitment and they’re dating you and maybe even sleeping with you, just like the hands of the clock move their way through the day and we find ourselves moving from week to week, date to date, they become aware of progression and direction and the more time that passes, the more you see someone, the more you shag, make plans etc, is the more the Commitment Is in the Offing Ticking Time Bomb starts to get louder and louder and LOUDER.

The only logical direction for dating is to a relationship especially after someone’s talked as if this is what you’re in or that this is where you’re headed. Some don’t even need to do that – there are people out there that get twitchy and switchy after one, two or a few dates. Either way, you can feel blindsided, confused, and hurt. Which brings me neatly to…

3) You didn’t ‘do’ anything – after the Commitment Is in the Offing Ticking Time Bomb went off, their internal panic alarm will have had them solely focused on one goal, and one goal only – get the hell out of dodge and reduce the level of commitment or obliterate it.

They’re often consumed with the panic so I’ll be honest with you, their primary concern is themselves with very little room for you. As they tend to press the Reset Button soon after and pull the same stunt again on someone else or even have the cheek to try and weasel their way back in with you, often with a very lame excuse for their absence/behaviour (don’t listen), it never occurs to them to truly consider the impact of their actions on you.

It’s like the ‘fever’ is over’. Now dating or even you are attractive again.

It would probably shock them to know that you were worried about what you’d said or done or may have even internalised this and allowed it to impact on future dates and your trust levels. They were just responding to their flight reflex. It’s always important to remember that someone who resists commitment also resists responsibility which means they would never truly consider how they impact others, because that’s responsibility.

The key things to remember are:

1) Don’t date unless you have your self-esteem in tow, have addressed your fears (also see the Get Out Of Stuck Guide) and have a reasonable level of trust so that you can use dating as a discovery phase.

2) Meeting people is mutual interest, you pursuing and them holding back or vice versa isn’t mutual. This means sort yourself out and avoid being the type of person who thinks that people need to chase them down and prove their worthiness. All you’re doing is inviting an ever challenge loving dipstick to take a shot. They thrive on your aloofness and distrust.

3) I’ve said it many times – never ignore code amber and red behaviour. That will save you from winding up in pain from having the rug ripped from under you.

4) Just like you shouldn’t rely on being heavily pursued, you also shouldn’t rely on intensity because you’re both Fast Forwarding which just sets you up for a massive fall. Slow your roll. It also means you can’t become over-invested in something that’s been going on for all of a hot minute or is lacking any real action and the landmarks of a healthy relationship.

5) Don’t make their actions about you – you’re almost like collateral damage of the Commitment Is In the Offing Ticking Time Bomb. People who resist commitment will ward off the ‘threat’ of it. “Imminent danger. Must start backing off. Try dropping hints. Not working? Act like a jackass. Stop calling. Feel like can’t breathe. Getting sweaty. Increase to level 10 threat. Back off, back off, BACK OFF. “

If your pattern is to date and be in relationships with commitment resisting unavailables, address your own availability so you reduce your interactions with these folk. The less you make their issues about you is the more you realise their issues are landing in someone else’s lap while you get on with your own life.