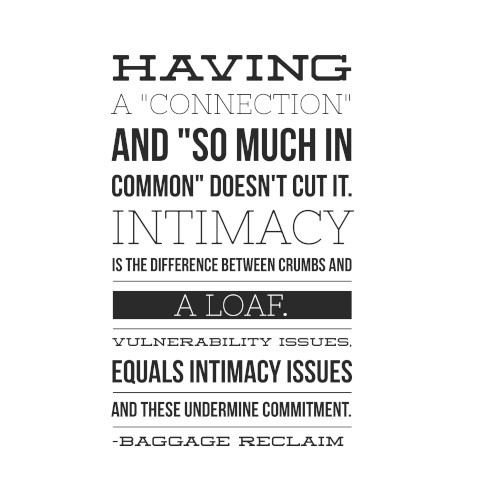 “We have an amazing connection”, insist so many people who are struggling to understand why they’re not experiencing deep, committed, loving, progressing, balanced, consistent relationships with the very people that they’re referring to.

“But, we have so much in common!”, said many a confused person who doesn’t share the common ground of the same perception and commitment to the relationship. They focus on mutual pain, admiration, shared experiences, attraction, hobbies, interests, orgasms, etc. If when it all boils down to it, though, they don’t share core values and aren’t copiloting a mutual relationship together, they’re incompatible.

Having a “connection” and “so much in common” doesn’t cut it. These are not the same as truly knowing a person. They don’t equal being truly vulnerable and authentic within a relationship that’s grown and fostered deep emotional intimacy.

If you are not being authentic, so showing up as you and being emotionally honest in your own inner relationship never mind with your partner, you will have a lot of the hallmarks of an intimate relationship without the intimacy.

You could love and care for someone, enjoy sex and other aspects of a relationship but fundamentally fear the consequences of closeness.

It’s fear that if you’re you, vulnerable and emotionally available (willing to feel all of your feelings and be rooted in reality instead of hiding and struggling with boundaries and commitment), that you will allow somebody to get close enough that it might hurt if they leave, disappoint, criticise, argue/fight with, or reject you.

It’s fear that being you is going to be “wrong”. You fear being unable to cope with their response that you’ve predicted or with your own feelings and thoughts. You don’t want to be under scrutiny, to be judged, to put you out there or reopen an old wound.

It’s possible that you don’t know what intimacy is. You may not have had relationships that you could truly observe and learn from. And you may have assumed that once you felt like you loved and cared for someone and were in a relationship, that you’d either be able to automatically know what each of you wants. Maybe you believe(d) that a relationship would fill a void and that you’d feel confident and in possession of the skills to forge closeness.

I know I’m not alone in having believed that being in a relationship, talking even if it’s not truly communicating, and being in great turmoil due to the rollercoaster of drama, is intimacy. I’m also not alone in having felt a ‘connection’ to people because of what they ‘activated’ in me. They reminded me of one or both of my parents or tapped into old issues. Hell, I thought that if a person cried on me, told me about how their pet budgie died when they were seven or how much they disliked one or both of their parents, or even wanted to get into my pants faster than the speed of light, that these were ‘intimacy’

We can have intimate moments with people, and we can share intimate pieces of information. Still, that doesn’t mean that we’re experiencing the intimacy that many of us desire in our relationships. Misunderstanding intimacy is why people wake up in relationships feeling attached and like they have “so much in common” but ‘hungry’. They’re not going in the same direction or feel an ever-growing void emerging. It’s confusing, disconcerting, and frustrating.

They think that they’re deep in the ocean when they’re actually just beneath the ocean’s surface.

When we don’t truly understand what intimacy is, an imbalance will exist in the relationship. One person leads and one person takes their cues. It’s the whole driver and passenger issue that permeates every unhealthy and struggling relationship.

We will lack self-awareness and self-knowledge. In not having an intimate relationship with ourselves, we won’t be able to distinguish between emotional and sexual intimacy. We’ll rely on talking and people-pleasing rather than showing up and deepening the relationship and how we relate over time.

If we don’t know where we end and others begin, we will mistake the resulting boundary issues for intimacy.

We’ll think that letting the other person direct and even feeling excessively emotionally reliant on them to feel worthwhile and purposeful, is intimacy. Nope, it’s faux intimacy.

Here’s the truth: A lot of us can talk about and do a lot of things.

Think back to a past relationship with a Mr/Miss Unavailable:

Maybe one of you talked about your problems or ideas more and even played armchair psychologist. Perhaps you were a Florence Nightingale trying to fix/heal/help/change them. There was an underlying desire and need to fill a void and be validated.

It could be that you also had trouble distinguishing between your respective feelings and behaviour.
Maybe you could talk about work, politics, the environment, your intelligence levels, or text morning, noon and night.
Maybe you were indispensable as a substitute for being vulnerable.

But ultimately, could you hold down a relationship with this person?

When all was said and done and they were right in front of you, and you had the choice between putting you out there based on the past, or fantasising about the future, or being in the present and true, were you able to just be you with no ifs, buts, maybes or censorship?

Were you only putting out as much as you might get back? Or, did you overgive in the hope that it would create a tipping point of them being more available?

Had you taken to pussyfooting around the No Fly Zone topics?

Did you open up initially but then subconsciously (or possibly quite consciously), taken a step back and close up? Maybe you did it due to the lack of response you received or not wanting to rock the boat.

And you’d be shocked at the amount of people who feel a connection and “so much in common” who recognise on reflection that they may have ‘known’ a person but they didn’t truly know them. They were getting a mask.

Unavailable relationships can leave you feeling lonely due to the lack of deep emotional connection as well as feeling adrift from your core self. And you can experience the latter even though you might now know what that is due to always playing roles.

We need to change the way that we think about intimacy. We need to recognise that some of the things that we’re hung up on that blind us like the “connection” and the stuff we claim to have “in common” are not only ways of justifying continuing to invest in something that isn’t going to nourish us, but they’re also ways of avoiding intimacy.

You always know that you’re experiencing truly intimate relationships when you feel nourished by the relationship instead of malnourished or like you’re riding a rollercoaster.

We also need to be more emotionally smart and go through the discovery phase of dating and build a relationship over time. This is far better than trying to force-ripen an involvement with Fast Forwarding. Intensity is a means of avoiding intimacy and realness that ultimately ends up leaving you feeling empty due to the lack of substance.

If we do not know the difference between us and another person, if we are in unhealthy relationships, and if we are ultimately basing who we are around possible reactions, we are not experiencing relationships with intimacy. But we can.

Love, trust, care for, and respect you first. Listen to you. Show up for you.

Disclosing Your Past and Insecurities
Forget this hinting malarkey. I'm going all the way.
The self-abandonment of compartmentalising other people's shady behaviour isn't worth it