About ‘going with the flow’ 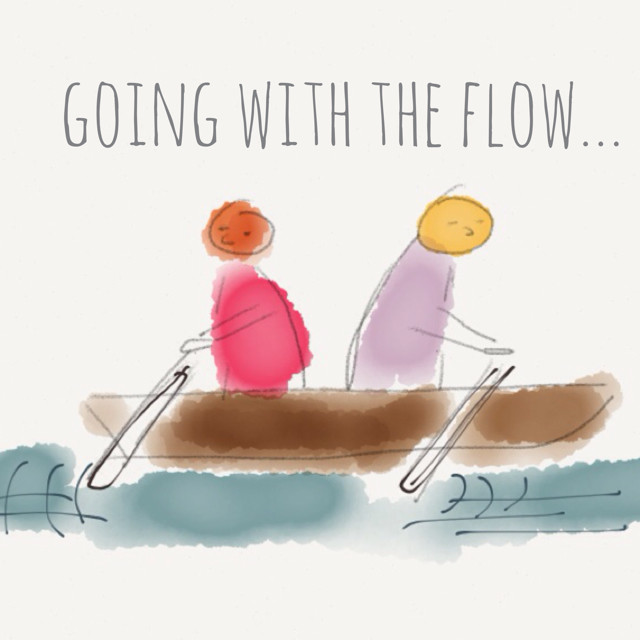 I’ve been on a few trips with people where one or both of us have suggested that we ‘go with the flow’ instead of making firm plans. I found that we were either on the same page and had a great time or… it turned out to be a clash of ideals because one of us had firm ideas about what they did or didn’t want to do which reared their ugly head while ‘flowing’. Since then, I know not to take the easy route of suggesting ‘the flow’ if it’s not my true want, especially because it paves the way for an honest conversation about what we both want to get out of the trip.

Similarly in relationships, if you’re both travelling in the same direction (similar outlook, needs, wants, expectations etc), it’s easy to ‘go with the flow’ organically, especially when you’re both willing to have an open dialogue in the interests of going with that flow. Where it becomes problematic is when one of you is doing your best to stall the flow or to steer down a different path, possibly while still claiming that you’re ‘going with the flow’.

In dating and relationships, the suggestion of ‘going with the flow’ can create unease if it crops up in a conversation where you are essentially seeking clarification about the other person’s position and/or the status of your relationship.

Time and again I’ve heard people express how the moment they heard this, it was the start of a slide down a slippery slope of self-doubt (Am I being needy/uptight?) and not listening to their own needs, expectations and wishes to ensure that they tallied up with the ‘flow’ that was being suggested.

We don’t know what the ‘destination(s)’ are when we embark on dating someone – even though we can be inclined to hope that it will be Destination: Long-Term or Destination: Fairy Tale – but if one of us is disrupting the flow while insisting, “Of course I’m open to a relationship” or the equivalent of, “How could you think that I don’t want to commit after I’ve blown hot and cold on you numerous times?”, there’s no flow to be going with.

Let’s be real – “go with the flow” often means “Flow your way into my bed” or “Let’s keep this casual” or “Why do we have to ‘label’ things?”

It’s great to meet someone who is genuinely open to a relationship and interested in getting to know you regardless of the outcome – it only takes one person in the end. It’s not so great to meet someone who starts out hot out of the gate and then undermines their actions, words, and intentions with sabotage due to feeling the “current” taking them into that familiar zone that brings out their fear of commitment.

It’s good to go with the flow to a degree in your relationships because you don’t want to hold a board meeting and scrutinise every move. In getting a sense of one another and going through discovery, you get a sense of who each of you are, what to expect and of course, what the nature of your relationship is (people unfold and who someone is and what they will and won’t do is self-evident) and a sense of its direction.

There’s no need to take it to the nth degree and think “Well commitment means that I would need to know what we’ll be doing on July 28th 2022 and everything in between” but it is too much for someone to expect that you would be together for several months or even years and the nature of your involvement and a sense of where you’re headed is still ambiguous. Unless you’re a teenager, I doubt you have the time to put aside to ride on someone else’s coat tails and wait for their instruction and even then, I still wouldn’t suggest it to a teenager!

You are a person with your own needs, wants, expectation and life.

You have your own flow – best to make sure you’re travelling life’s journey with people who are flowing with not against you.

You’ve also got to ensure that you don’t fear pushing your mental flush handle for those who need to flow the hell out of your life so that you don’t end up busting your own boundaries. You don’t want too much ‘in’ and not enough out as you may end up constipated…

It’s a given that you have to ‘flow’ to a degree in the early stages of dating somebody and at the same time you need to have on your life preserver (not emotional airbag) and be self-aware enough to do discovery while continuing to be you, but if someone is asking you to go with the flow, be careful of co-signing to something that isn’t in your best interests and find out what their idea of ‘flowing’ means – finding out what that looks and feels like to them as well as your own version of ‘flow’ is all a part of discovery. Unless you’re at least flowing in the same direction, you’re not on the same page and you’re certainly not in the same relationship.