The Quality of Our Relationships *Matter*. Forget Forced, Go Organic 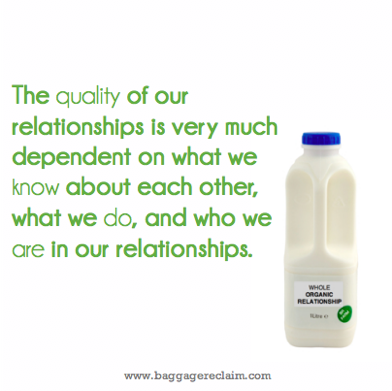 The quality of our relationships romantic and otherwise matter. A lot of the issues that we come up against when we struggle with dating and forging healthy relationships are rooted in essentially attempting to create ‘quality’ relationships even though we’re not involved in a healthy partnering, whether it’s down to incompatible core values or unhealthy behaviour, which will eventually render you incompatible anyway no matter how many other things you claim to have in common.

If you tend to think about you or what happens in your life in terms of being “good enough”, you’ll find that when you consider the quality of your relationships, far too much emphasis is put on ‘worth’; you’re thinking that there’s something wrong with you that is affecting the quality of the relationship or what the other person is doing, while at the same time putting the other person on a pedestal and giving over all of your power.

The quality of our relationships is very much dependent on what we know about each other, what we do, and who we are in our relationships. Note that I said know not assume, do not talking about doing stuff but it not materialising or contradictory actions that possibly might contradict words, are as in, whether we are our true selves or fake selves or even doormat selves, and the same for the other party.

This is why there are people who feel really ‘connected’ with someone in spite of the fact that when all is said and done, they don’t hold a great deal of knowledge on the other party.

It’s also why some relationships seem to have more time spent fighting for them or making up from fighting for them than they do actually living them because so much time and effort is devoted to passive aggressively or aggressively trying to ‘make’ the other person be or do something or to surrender their values.

It’s definitely why so many people seem genuinely surprised that they’re not in a ‘quality’ relationship with someone who by their own admission is aggressive or shady. If someone’s told or shown you that they are certain things, it’s only betting on potential and denial that is creating the “surprise” element when they live up to being who they are.

Healthy, mutual relationships happen organically with two people copiloting the relationship while also retaining their identities and owning their own. i.e. none of this making other people’s behaviour about you malarkey.

The quality of what we try to make our relationships out of matter.

You can’t override valid concerns with connection, chemistry, sex etc and plough ahead because when the pain kicks in, it will be over the very things that you thought you could ignore or shove under the carpet. Healthy relationships aren’t built on a foundation of wonky, busted or non-existent boundaries or all manner of secrets, lies, or things you’re ignoring. All the love in the world won’t erase these issues.

It matters about who we engage with, what we put in, what we take out and basically what we try to make a relationship out of.

It’s best to enter into dating and relationships by starting as you mean to go on because deciding to consider the healthiness of your relationship when you’re knee-deep in it and then attempting to reverse-engineer a healthy relationship out of a not so healthy one is a flawed plan.

The development of a healthy relationship is organic – there’s no such thing as an instant relationship even if it might feel like it at the time.

When we try to jump ahead to an intensity, feelings, expectations, experiences, and a relationship that doesn’t reflect the effort put in or the knowledge, we’re taking a shortcut. It’s the same with self-esteem – whether it’s trying to get it from external sources or thinking that you can go from a habit of not treating you with love, care, trust, and respect to ‘great self-esteem’ in a short time.

– If you’re not being you in the relationship, the quality of that relationship for you isn’t going to be particularly good no matter how much you try to convince you otherwise.

– If one of you is behaving in an unhealthy manner, this affects the quality of the relationship no matter how much betting on potential and cloaking in denial. You can’t be ‘healthy’ for the two of you.

– Two of you behaving in an unhealthy manner just equals more pain. The shadiest of folk also know how to attach themselves to people who don’t have the greatest of self-esteem and who have unhealthy relationship habits, and they end up taking them down and draining out whatever remaining ‘resources’ they have, often while boosting themselves.

All of these things affect the quality of a relationship because you can’t copilot plus these issues affect the landmarks of healthy relationships – intimacy, commitment, progression, balance and consistency as well as shared core values along with love, care, trust, and respect.

The quality of your interactions and relationships dramatically improves when you don’t see everything in terms of your worth as a person and you’re not going around in investing your energy, effort, and emotion into people and things that detract from you.

We like to put things in the proverbial microwave and cook it in quick time. We want to know how things will ‘end’ or shape up to be now. We want to know if these dates mean a relationship even if we don’t feel a great deal or we want to know if the relationship is going to last until the ends of time even though it’s just started. We don’t want to walk away even when we know that we really need to and we worry about having put in a date / few dates / months / few months / a year / several years so we ignore everything and try to force it and ourselves along.

When you look back over various relationships and consider who you genuinely enjoy spending time around, who has turned into a lifelong friend, who’s flaky, who leaves you feeling uneasy, who you seem to have to put an awful lot of thought into how you’ll ‘play’ things, or how you think you look around them or whatever, you can see clearly which relationships have evolved organically over time without you having to orchestrate, coerce, suppress, or put yourself on the sacrificial alter for.

Note that continuing to do the same things – carrying the same baggage, beliefs, behaviours, and habits – and expecting something different to happen is relationship insanity.

An organic relationship doesn’t feel forced. It feels natural in the sense that it’s not contrived, it’s mutual and it’s evolving, as opposed to “Oh my gosh! This feels so natural!” when they’ve just told you that they’re going to take you to meet their parents, suggested a holiday and mentioned starting a family even though you barely know one another.

Organic relationships are healthy so while they won’t be problem / stress-free, this is altogether different from basically trying to make a silk purse out of a pig’s ear. They have life, they grow (you know something is very wrong when the relationship goes in fits and starts, regresses, or comes to a halt), there’s togetherness, shared values including common goals and striving towards common outcomes, and they’re not fantasy and fakery.

You’re getting to know one another as you really are (and not trying to to make one another change), the relationship is continuous and you have mutual dependence but are still each independent, and you don’t need to tell long-winded stories or list excuses to describe or legitimise the relationship, the other party or even yourself.

Compatibility, Your Type, and Common Interests Part 4
Who Is The Designated Expert On You? Er, Yeah...It Had BETTER Be You
Podcast Ep. 117: Needs, Gary Chapman's 5 Love Languages & Misunderstandings