Dating Is A Discovery Phase: Are you trying to strike up a relationship deal before you’ve ‘discovered’? 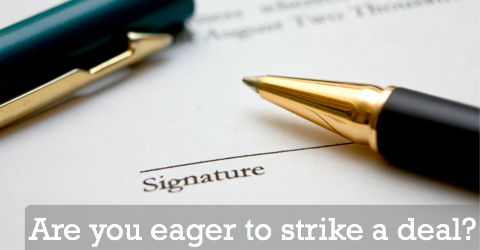 Living a life that respects you and follows the path of the values you claim to have means you shouldn’t be trying to ‘strike up a deal’ with any ‘ole person. Unfortunately, this is what many people are trying to do with dating – before you’ve even sussed out the person, you’ve already put yourself under pressure that you’ve got to close the deal! But you don’t know what the deal is plus not enough has actually happened to indicate what the deal possibilities are.

Dating is a discovery phase for you both to find out the facts about one another and work out whether you can strike up a mutually beneficial co-pilotted relationship.

Note, I don’t factor casual relationships (oxymoron alert) into this because it’s a bit thick to claim to be dating with the purpose of lining up someone for a shag, an ego stroke and a shoulder to lean on – it’s called ‘dating’ to get your foot through the door like one of those dodgy sales people. If they told you they were going to sell you a busted up vacuum cleaner or insurance that you don’t need, you wouldn’t let them in. It’s easier to sell it to you as something better and then leave it to you to either discover the truth when they’re long gone or be like “Oops I did it again. Let’s just go with the flow/my fish died/I’m not ready for a relationship.”

If you date without a person shaped void, with your eyes and ears open and your feet in reality, it allows you to become aware of who they are – it stops it from being about what they can give to you to ‘make’ you whole. You’ll begin to discover the facts about them (and they you) and part of this is recognising what the facts mean, even if it signals the end. Sometimes in your eagerness to be in a ‘deal’, you forget a few things:

Experience has taught me that whether it’s in personal or business relationships, many people will talk the talk and appear to be walking the walk in the run up to closing and confirming the deal, but when it comes to putting their proverbial money where their mouth is, they disappear, raise ‘sudden’ objections’, or withdraw what they’ve been offering and leave you with an inferior replacement deal.

Having self-esteem which includes your boundaries and values, plus being knowledgable on code amber and red behaviour, helps you to work out your deal breakers, which are the things you cannot accept and overlook that will render your relationship over.

Dating is like courting each other to strike a deal.

Some of you are trying to strike a relationship deal without doing due diligence.

Some of you think you’re doing due diligence but are looking at the wrong things and then wondering why you’re not in the right relationship. Good sense of humour, shared love of bungee jumping and sleeping at a 17 degree angle and whatever else – no indication of values, or at least not that the ones that are fundamental to you.

It’s ultimately someone’s character that’s going to make or break their participation in a relationship with you.

Some of you are trying to strike a relationship deal by signing on the dotted line with people who are not out of contract on their previous deal.

Some have no interest in or capacity to strike a deal.

Some of you are trying to strike a relationship deal with someone who wants to be a silent partner, even though relationship deals can only be made with joint stakeholders who are putting in 100:100 effort.

Some of you are trying to strike a relationship deal with everyone you date, which is like throwing crap at a wall and hoping it will stick. Or like those companies that are sold for £1 with a view that the buyers will take on the debt, fix the problems, and turn them around…

Some of you are trying to strike a relationship deal from a sandcastle in the sky in fantasy LaLa Land.

You cannot strike a deal with everyone – you’re just not that desperate. When you indiscriminately attempt to strike deals or you’re getting into bed with shady partners, you’re eroding your own value in the process.

Before you commit to the idea of being in a long-term relationship with someone, maintain the commitment you should have to yourself that requires you to act in your own best interests. Always. Then commit to using the dating phase to evaluate the potential of moving into a relationship while enjoying yourself – you do know that you can date and even get laid without losing your mind, your ability to judge a situation, or even yourself? That said, if you’re the type of person who can’t mix sex with getting to know someone, it’s best not to ‘get down’ until you can.

It’s also important to remember that you are not automatically signed into a relationship deal, a mentality that a lot of people who don’t value themselves enough seem to have.

It’s like (and this is mostly for the ladies), “Jaysus, someone’s giving me the time of day! I should want a relationship with them just because. This could be my last chance saloon. Right, I’m in! They’re interested in me so I’m gonna draw up some papers but this is a done deal either way.” Say what?

You get to choose too and you can walk away. When I listen to people talk about some of their dating angst, often with people they’ve known for all of a hot minute, I’d be forgiven for thinking that they must be shackled to what are practically strangers for all of eternity. This isn’t a hostage situation – it’s a discovery situation, mutual discovery at that. To treat it as anything else is to act like they’re automatically OK for a relationship deal regardless, it’s just you that has to prove yourself, which is bullshit.

Even credit card companies do a bit of homework before pre-approving you for a card – I’d like to think you’d put far more effort into choosing a potential relationship partner.

Why are you so committed to something that’s not even a relationship?

Dating certainly isn’t easy, but it’s certainly easier when you remove the pressure of trying to make every date work out, and only try to move forward with the ones that show some actual promise.

Not every person you date has the potential for the relationship you envision. When you’re already acting attached, it begs the question of whether you do this with everyone. You might argue that you do it because they’re so special, but over-investing in people you hardly know with your betting on potential goggles and even ditching your own life for them, sends the wrong message – you’re just not that desperate.

Dating is a discovery phase – you can walk away at any time and equally you have the power to opt into what you want to. Own your power, use it wisely and stop walking around with a handy contract in your pocket ready to hand out to the next person that shows you a whiff of interest.

The Trouble With Lying & Cheating (Why you need to stick to a low BS diet)
The Window of Opportunity in Dating - There's Only a Certain Amount of Time To Act Upon Interest
9 Tips For Complimenting A Woman
Share this...