Slow Your Roll: Why Being Asked For Your Number is an Expression of Interest, Not a Guarantee 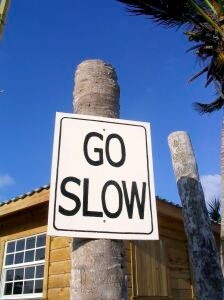 Claire recently got in touch with me because she was literally freaking out about a guy that had asked for her number and hadn’t called when she expected. They’d met on the weekend, he’d called on the Tuesday and suggested meeting up a couple of days later, she’d said she wasn’t free and suggested the weekend, he said he was away that weekend but would call the following week, and she was flipping her wig by Sunday evening fretting about if and when he’d call. When she got in touch with me, it was the Thursday i.e the weekend he was away hadn’t even arrived yet. I.e When she got in touch with me, she had known of this man for five days.

Too.Much.Drama. Let’s be realistic here: Isn’t it just somewhat disproportionate to be investing so much mental and even physical energy into someone you just met and that you don’t know?

If this is how you carry on before a date has happened or when you’re in the early stages of dating, what will happen further down the line or when you experience conflict? Will you explode?

How on earth can you see so much potential in something that hasn’t happened yet that basically amounts to someone asking for your number? When they say that they’d like to take you out or ask for your number, it’s an expression of interest. It’s not a legally binding contract for a relationship nor a guarantee of a date.

I hear from a hell of a lot of people, admittedly mostly women who are waiting around. I’m not talking about waiting around in a relationship or during the dating phase which is bad enough. They’re waiting around for someone they just met to call or even email/text them. Their whole life has gone on hold and they’ve even cleared their schedule in anticipation of the possibility of a date happening.

When I see people losing their marbles over an ‘expression of interest’ and putting themselves into a holding pattern circling over the dating skies waiting for their ‘slot’, it worries me. What were you doing last week/month before you knew of this person’s existence?

They’re just not that special. And I say this especially with regards to how women behave towards men and treat them like the sun shines out of their bums, glorifying them without them so much as having to date you and put in any effort! I was talking with a friend yesterday who was expressing praise for a guy that’s not trying to get into her knickers or get fresh with her. Now I’m not saying that this isn’t a nice thing, but to be honest with you, it’s the least we should expect from someone that we don’t know very well!

That’s not to say that someone like this may not end up being relationship material but the whole latching onto one thing and making them out to be the messiah has been done to death – just see my posts on appearance, intelligence, and common interests!

Now I say this with the benefit not only of writing Baggage Reclaim for six years but also spending almost all of my dating life being guilty of what I’m talking about – picturing. I’d meet guys and I won’t lie – sometimes I put our names together, or imagined what it might be like to go somewhere with them or meet their parents. I’d check my phone umpteen times and was already committed to a future with them when I hadn’t even been on enough dates or had a relationship with them to justify all of this energy.

It’s like “Wow, a man has asked for my number. He must be really special and I must feel interested in him. Oh he mentioned he likes to play ping pong, listen to similar music to me and looks just like I like them. Squee! I wonder if this might be it? Oh how great this would be because this whole dating thing is exhausting. Right, I’ll have to let the girls know I might not be around next Friday/Saturday. I wonder where we’ll go…” This whole internal conversation could happen within seconds.

Now I get it. When you venture back into dating, you might feel a bit jittery because of previous experiences. Or…you meet someone and feel a bit excited by them and your hopeful meter along with your libido and overactive imagination go into overdrive. Or…you’re on Columbo alert because you recognise that dating is a discovery phase, only you’re a bit too eager to get the dating crime scene tape out.

Slow your roll on all counts – there’s no fire.

I’ll be honest with you, if you’re losing your mind over someone you’ve just met (I’ve heard from people having anxiety attacks even), it’s a sign that you 1) need to address the real source of the anxiety and get that under control and 2) focus on building up your confidence and trust in yourself before you get back into dating. You’re not going to discover a damn thing if you’re freaking out because it distorts what you perceive yourself to be experiencing.

Freaking out in itself is a signal that you’re not ready.

If you mentally get carried away as soon as you meet someone, it’s time to force your feet onto the solid ground of reality. Not only are you betting on potential but you’re reacting very disproportionately which is like Fast Forwarding yourself. Alarm bells should be ringing because you’re over-invested. It’s just not healthy to throw yourself into something that doesn’t fully exist yet – you’re emotionally committing before there’s something to commit to.

If you’re holding a magnifying glass to your interactions, it’s important to give yourself a caution. Be aware of your boundaries and recognise code amber and red behaviour but it’s also important to recognise that you’ll be going nowhere if you put nothing into your interactions. Fine if you see something that clearly shows that they’re not worth pursuing anything with – just bounce. It doesn’t cost anything – FLUSH! NEXT! If you’re not sure, go on a date – it’s just a date. If you don’t want to – that’s fine! No biggie – let it go.

You don’t owe a date or interest to everyone that expresses an interest.

Whoever they are isn’t your last chance saloon. When someone asks for your number or invites you on a date or even has a few conversations with you, it’s an expression of interest. How far that interest stretches and where it lies is only going to reveal itself in the coming days, weeks, and if you go on to date, months. Some people will express an interest and it won’t materialise into anything – you can’t miss what you didn’t have.

It’s like getting upset because your numbers didn’t come up on the lottery. Surely you don’t start mentally spending the money when you haven’t actually won?

If you don’t slow down, you’ll kill things before they’ve even started with Dynasty levels of drama, most of it going on internally! You’re setting yourself up to fail! Some expressions will materialise into something but it won’t necessarily be what you thought – that’s what the discovery phase is for. And then others will grow into something more enduring. The point is you can’t treat everyone like an equal opportunity relationship – you’re not that desperate.

Dealing With..Asking Guy's Out...and No...You Don't Need To Do It Because You Think He's Shy
When Knowing That You're Crazy About Them / In Pain Is As Good As 'Having' You
Have The Willingness To Listen To Your Gut