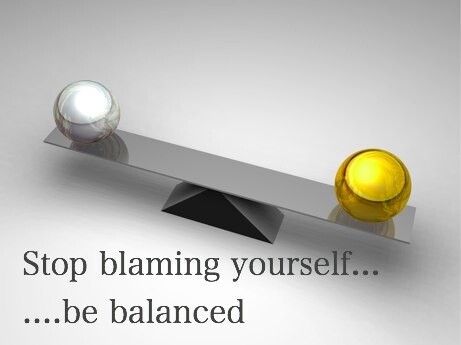 Every day I hear from people veering between blaming themselves for ‘everything’ or blaming someone else or even everyone else. Invariably they completely miss the point and the bigger picture.

Trust me when I say that it’s not your looks, your religion, or the fact that you were in a bad mood one day, or that you didn’t answer on three rings, or that you weren’t patient enough after doling out 50 billion chances. Equally it’s not all you plus if you focus entirely on others problems you miss a golden opportunity and necessity to focus your energies (positively) much closer to home.

If by blaming yourself you manage to avoid any and all information pertaining to the other person and their part, it’s just denial by another name.

Always be extremely cautious of anyone that experiences problems but doesn’t see themselves as a part of it. That said, it’s quite extreme to see yourself as the only source of problem and blame.

It’s time to look beyond you to the bigger picture so that you can quit being dishonest and dodging responsibility. If 4 people rob a store and get caught and 1 decides to take the blame, it’s not responsibility because it removes it from the other 3 people. You might argue that the other 3 ‘might’ not have done it otherwise, but it’s like assuming you’re in control of what goes on in other people’s minds.

Taking a more emotionally mature, less child like position means that you can see where you end & another person begins and recognise your own responsibility. I’ll never forget the realisation that at 28, I still emotionally responded to certain situations as if I were 5 or 6 years old. That sobered me right up and forced me to grow myself up fast.

You also have to stop being a perfectionist – it’s a bit like going “It’s either all my fault or not at all!” You’re not an island. Where’s the middle ground?

It’s also critical to recognise the difference between influence and responsibility because having little or no boundaries influences someone with the disposition to take advantage or abuse to do just that, but you’re not responsible for their actions. What you’re responsible for is not having boundaries. A respectful person wouldn’t bust them in the first place.

Also consider another perspective. Get off the blaming horse and look at this situation through the other person’s eyes and be 100% honest with yourself. What do you see? What are they doing? You might not like what you see but at least it’s the truth – one with more logic.

What are more realistic reasons as to why things have happened?

While it’s not the easy thing to hear, it’s actually the lazy option to say “Such and such happened – oh it’s my fault” There’s a whole lot of stuff missing in between that. Be logical. If you’re going to make yourself accountable for something, ensure that it can be pinned to you with a logical reason that if you said it out loud to another human being, they wouldn’t wonder if you’d been at the crack pipe. If it sounds disproportionate to what you’re pinning it to, it’s because it is.

If when you ‘blame’ yourself for something and there’s someone else in there with their behaviour, I’m sorry but you can’t blame yourself. OWN.YOUR.PART.ONLY.

The truth is that anything that truly is your fault is something you’re in control of and able to address.

If someone’s upset tomorrow and I know that the reason for them being upset is because I called them an assclown, I can apologise for my actions and resolve to be more thoughtful in what I say when I experience conflict. If I have nothing to do with it, while I can attempt to help improve their mood, I wouldn’t jump to conclusions that due to me living and breathing and not being ‘good enough’ that I must have something to do with it.

If you’ve got something to do with whatever you’re ‘blaming’ yourself for, address it and move on. If the situation has moved beyond the point of having anything that you can truly do to resolve it, address the issue within you and resolve to live your lessons now and in future relationships.

Blaming yourself is highly destructive. The flipside – blaming others and avoiding responsibility and accountability is destructive to your relationship with them. Blaming solves nothing.

Unless you’re planning to never do anything, get off the blame pot and take action. Don’t play victim with yourself.

Anything you truly do believe you’re doing that doesn’t benefit you and is a factor in ‘your part’ – what can you DO to improve it?

Over the past few years I’ve improved my ‘part’. I’ve learned to experience conflict and discovered that the sky doesn’t fall down and criticism or perceived criticism doesn’t derail me. I don’t immediately emotionally teleport back to being 5 again. I’m no longer a fearful person, I don’t self-reject and I don’t get switchy and twitchy about the possibility of being rejected or abandoned. It’s more important that I like me than I try to impress ‘everyone’. I also don’t bust my proverbial balls about disappointments nor do I blame everyone else.

There are two things that I find are an attraction in blame:

1) It keeps you invested in a situation effectively helping you avoid dealing and doing.

In the past I’ve made it my vocation to tell someone all about himself because it was important to me that he knew where he’d failed in the relationship. Equally I’ve suffered at my own hands by punishing myself with blame.

Be careful of becoming obsessed with being proven ‘right’ – by sticking with blame it’s like resolving to continue on a quest from now till the end of time to leave no blame stone unturned and prove that you’re right to take the blame (or blame them).

Behind every blame is what you’re truly avoiding dealing with – face that and get uncomfortable. Write it down, be angry, cry, whatever and then look forward. I actually found it very useful to ask myself how much longer I intended to blame myself for, especially after a friend asked me that very question.

I also find it very useful to say it out loud – voice your thoughts. One day I said out loud for the first time “I’m blaming myself for how be treated me because he couldn’t cope with me being black.” I laughed till tears rolled down my cheeks.

When are you going to let it go? Say when because holding on forever isn’t an option.

Drowning in detail distances you from objectivity. Ending the blame paves the way for you to actually learn from the experience and grow out of it.

Blame is another form of rejection so if you want to stop feeling bad and suffering unnecessarily, the key is to stop rejecting yourself and LET IT GO. This is often synonymous with accepting that it’s done but the truth is, the relationship (or situation) is ‘done’ anyway. It’s in the past – it’s you that needs to catch up to your present.

We Need To Talk About Narcissists: 20 Mindset Shifts To Help You Stop Crazy-Making Yourself
Moving On From Disappointment: Are you focused on the person, or on the bigger picture of your life?
Relationships need two committed parties to grow and prosper