Sometimes a ‘hard NO’ is the only option you’ve got 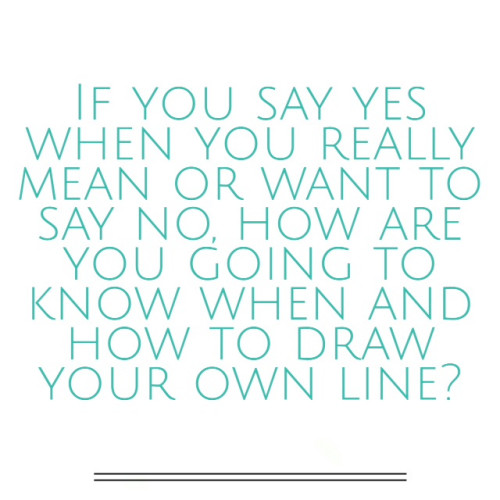 I’m frequently asked for advice on what effectively boils down to being able to give a ‘soft NO’. It’s the kind of no that’s probably still going to result in you feeling a bit icky during and/or afterwards, but you feel that you’ve done the no justice by being gentle and ‘kind’ about it.

Basically, a ‘soft NO’ is when you do what you think is trying to let them down gently.

This includes apologising profusely, claiming that you wish you could but you can’t, telling a long-winded story to justify declining, giving a blow-by-blow run-through of your schedule and all of the claims on your time, and other such excuses and justifications that many of us engage in.

It’s as if we don’t believe that we can say no ‘just because’. It’s as if no isn’t no if it hasn’t got a story, excuses, or looking like we’ve been through the horrors to get to the point of saying no so that the other person is sufficiently guilty and embarrassed at having asked us in the first place.

I’m generally good at saying no, simply because experience has taught me that when my stomach is tied up in knots, there’s that heavy sensation in my chest, and I’m overworked, overtired, over whatever and basically over my bandwidth, I need to stop telling people what they want to hear. Or what I think they want to hear but possibly don’t.

For example: Yes, of course I can do that (even though I already know that I have too much on or that I don’t want to).

In these situations, I know that I need to give a straight-up no.

Now I know some of you probably think I’m a hardass! In reality, though, unless I know that the person typically behaves in a certain way or that the particular request is a no that I’ve already decided on in advance, I don’t feel that I have to do a ‘hard NO’.

In a nutshell, this is a closed ‘No’ without the dressing of superfluous explanations/excuses.

Hard no’s should make it very difficult for the person to push you any further on it… unless they have an issue with respecting boundaries.

If you feel like you’re trying to let them down gently or that you have to back up the no with explanations and excuses that are often about leaving you comfortable at having said no, never mind the recipient, you’re likely giving a ‘soft no’. These are not ‘bad’ (quite the opposite) but you’ve got to know when and who to use them with. If they are not working in a particular instance, your only option is to go for a ‘hard no’, not to keep coming up with other long-winded and gentle, round-the-houses ways of saying what you are ultimately trying to get across – that you cannot or don’t want to do it.

Sometimes there is a fine line between a ‘soft no’ and sounding like you’re bullshitting.

With very assertive people as well as aggressive folk, they will exploit a soft no and see it as a potential yes and an opening to negotiation. This can work very well in sales roles to a degree, but it can leave people feeling as if their wishes, feelings, and opinions have been trampled on and ignored.

I’ve sometimes agonised about saying no because when I get past the fear of conflict, the fear of disappointing them and the rigmarole of ‘explaining myself’, behind it all is worrying about how I look (even though this is often irrational). This is when I start ‘padding out’ the no.

In the last post on telling people what they want to hear, I shared that I’d got myself into an awkward spot with an estate agent. Caught on the hop, I found myself handing over my number. As soon as I closed the door, I immediately regretted it. I resolved then and there that if and when she called, I would decline and it’s exactly what I did.

Now I could have kept saying, ‘I’ll think about it’ or ‘I don’t think so but I’ll speak to my husband’ or explaining why I would be uncomfortable doing what she’d asked but actually, not only was it just wasting time but I really didn’t need to. I can handle no, and I have to trust that she can, but I also don’t need to justify saying no or why I don’t feel comfortable – I just don’t.

As I think of my younger self feeling pressured by guys and as I thought of BR readers, never mind the many young children and teens who end up agreeing to stuff against their better judgement so as not to ‘offend’, I recognised the importance of biting the bullet and saying no.

I’ve learned that the majority of friends, family and professional acquaintances will take and respect a soft no  (although I have scaled back the waffle because people do feel weird when you over-explain), so there’s no need for me to lay it down, although if I have to I will.

Familiarising yourself with who you need to be clear and direct with can save you a lot of headache.

Sometimes a ‘hard no’ is the only option you’ve got. Whether it’s that the request is so over the mark that you don’t want to leave any ambiguity around your answer or it’s that the person is trying to swing you to a yes, being absolutely clear about your no is imperative in these situations.

Just because someone is pushing it, it doesn’t mean that you have to reconsider or give. It just means that you need to be firmer in declining. It’s all very well worrying about causing offence by saying no but you also need to consider that you may be doing something offensive to you by saying yes to busting your boundaries.

The more you ‘pad out’ the no is the more it sounds like justifying when actually, they’re unlikely to have given anything close to a sufficient justification for either asking you or continuing to push the issue.

If like me you hate being put on the spot and sometimes squirm at having to turn them down right there and then, just say, ‘Let me get back to you on that’, give yourself some breathing space on it and then call or drop them an email if it’s appropriate. If they make out like it’s a now or never, just say, ‘If I have to make a decision right now then I’m going to have to say no’ and mean it. Knowing in advance what your boundaries are, what you want to decline, or what you typically need some time to think about before you agree, can keep you out of a lot of trouble. Suggesting somebody else who may be able to help (obviously that’s not going to work if you’re being asked to partake in a threeway or in something shady) can sometimes help but just be careful of burdening you with a task that you may not need and that might even draw you back into the possibility of being asked again.

In the end, whether it’s a hard no or a soft one, no is an option for you.

We ignore red flags and our intuition because we want the fantasy
10 Fundamental Lessons on Boundaries in Relationships Part 2
Set The Standard
Share this...