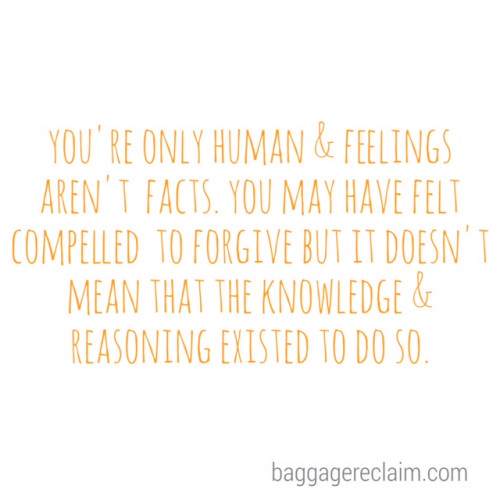 Sometimes we overestimate our readiness and willingness to forgive. We essentially forgive prematurely and then once we’ve had some time, or we start listening to our own feelings and thoughts, or we start observing the person, or grasp the full situation, we realise that actually, we’re still angry, sad and hurting. We realise that we haven’t forgiven, and this in itself may cause us to feel really bad depending on the associations that we have with forgiveness.

When you’re in this situation, you may have prided yourself on being able to forgive because it’s what ‘good people’ do and so you may feel quite ‘bad’ now. It will feel all the more worse because you may have pushed down your own needs, feelings, expectations, opinions etc., aka People Pleasing, and so not only are you contending with how you feel about the ‘event’ or even series of experiences that have led to this, but then you’ll also be battling with your guilt or anger about not having moved past it.

You’re caught between a rock and a hard place and the more you push down your true feelings and thoughts, is actually the worse you’ll feel.

In these circumstances, sometimes the forgiveness comes about due to having believed that if you forgave, that the situation would change in your favour. It hasn’t. It’s almost like wanting a refund or a credit note for the forgiveness expenditure.

Claiming forgiveness may have been about shaming you, or even blaming you. Their transgression may have been blamed on your ‘inadequacies’. Hopefully you’ve come to the realisation that blaming you for their behaviour was wrong in itself. Granted this may have been a decision based on your own interpretation but they, if they have integrity and a sense of responsibility and accountability, shouldn’t have been willing to let you take the fall while they benefited.

You may have forgiven under the misapprehension that you are both victims of a third party. Your anger gets deflected to the latter and it may consume you. Circumstances may have influenced your desire to ‘restore order’, whether it was outwardly (for instance with your social circle or family) or inwardly. This may work for some time but will become problematic if the original reasons (which are aside from the third party) aren’t addressed or continue to impact. You’re also going to struggle with your decision to forgive if new facts come to light due to drip-feeding:

This is when a person tells you that they’ve given you the whole truth and so you think you have the facts and then they keep drip, drip, dripping more truth so that you end up becoming confused and distrusting.

Certain factors may have dictated the original decision to forgive. You were over a barrel (or felt like it). It could be that you felt that you had to forgive due to believing that your options were limited.  It could have been down to dependents or for financial reasons, or social consequences, personal beliefs or any number of reasons. Whatever the reasons, they mattered at the time and possibly still do so it will increase your sense of being trapped.

Maybe you really did forgive and then they repeated the issue or even did worse. Sometimes even that may not be the cause – it may be that what they say when the issue is repeated or the way in which they go about things leaves you feeling that they’d felt entitled to your forgiveness without being willing to show remorse through their actions. They may say things now about ‘back then’ that undermine their original apology, explanations and promises. You may feel like a fool or that this latest issue has lifted the blinders off you and given you 20:20 vision.

Whatever the circumstances of your change in forgiveness position, it’s critical to remember something: You’re only human and feelings aren’t facts. You may have felt compelled to forgive but it doesn’t mean that the knowledge and reasoning existed to do so.

Equally you may have felt afraid for a variety of reasons and acted as if there was a real threat of something, when actually there wasn’t.

Feelings also change and sure, it may not be ‘convenient’ that they have but if you ignore the change in your feelings, you miss am opportunity to gain some insight into where the change stems from.

It could be that there’s underlying anger, hurt and resentment, that’s bubbling up or it may have been prompted by a specific event. It doesn’t have to be something big or even related to the original event – something (or someone) has ‘unplugged’ your hurt.

It’s also important to note that you make the best decision you can at the time, with the knowledge and awareness that you have at that time.

You may simply know more now than you did then or have a different perspective. Forgiveness is a decision to let go and move forward but saying the words isn’t enough – you have to keep making the decision and reflecting it in the supporting actions. If you’re unable to keep making that decision, it’s OK to acknowledge this because you’re putting you on the path to being authentic – with you and with the other party.

You are allowed to feel angry and hurt.

Sometimes we park these feelings because we fear allowing them ‘out’ and making the other person feel bad, as if there’s a time limit and it’s this act that compromises us and leaves us in deep pain. It also suggests that they have a right to peace and to move on but that we don’t have a right to feel what we need to feel. We forget if we allowed our feelings to come up to the surface and gradually dealt with them, that we’d probably truly move on from this experience a damn sight quicker than stuffing our feelings down and pretending that everything’s tickety-boo or erupting with frustration.

I’ll tell you what’s not going to happen: What you’re feeling and thinking isn’t going to just disappear. I mean sure, you can stuff it down some more or even have the same discussions or even arguments but ultimately, if it all leads to you not being able to face the issue (alone or with the person in question) or you can’t face you, what’s the point?

Often in these circumstances, we act as if we’re stuck with our original decision, as if to say that we can’t step back and reevaluate. This type of thinking around decisions is what can cause us to feel stuck and unwilling to back away from something that’s not working for us.

That said, forgiving prematurely doesn’t mean that forgiveness is off the table – it’s just that you need to honour your own feelings and ensure that you have the reasoning, knowledge, actions, and if relevant, the support and understanding from the other party to get there in your own time. You giving you a hard time over it instead of being self-compassionate and them giving you a hard time about it isn’t going to help, because ultimately, if you forgave prematurely, it’s highly likely that they moved on from whatever it was prematurely, and that means that you both stand to learn and gain from this.

Feeling like someone took the better version of you when they left
Guest Post: Mr Unavailable - When a Woman Won't Heed The Signs
Revisited: It's JUST Christmas/The Holidays - Stay off the Relationship/Drama Crack