We need to talk about “selfish” 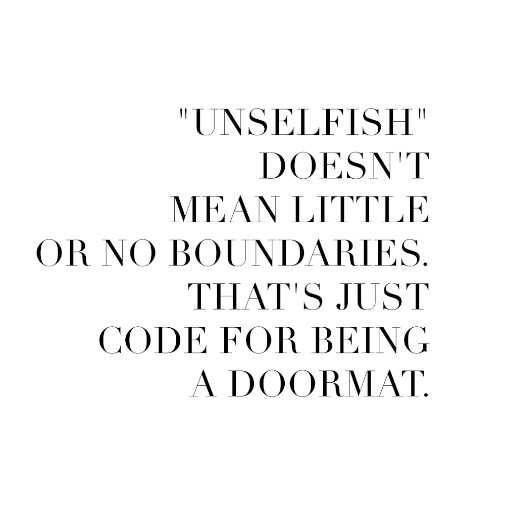 When we suppress and repress our own feelings, opinions, needs, expectations and desires, we become oversensitised to those of others and develop a pesky habit of taking ownership of their feelings and behaviour. It’s as if in silencing us and being on high alert, we think that we’re feeling their feelings and thinking their thoughts, causing us to anticipate and forecast doom while burdening us with ‘duties’.

When we take ownership of other people’s feelings and behaviour, we spend a lot of our time grappling with doubt, guilt and shame. We fear that we are being “selfish” and we also tend to engage with people who feel entitled to our compliance.

As a result, when we perceive that we’re being requested or expected to do something that takes care of their needs, expectations, and desires, even if it isn’t 1) fair and reasonable and 2) our responsibility, we convince ourselves that to say no or leave them to it, would be “selfish”. We imagine that they’re feeling really bad or thinking whatever and whatever about us. In order to relieve that tension within us and keep up with this image of being what we think is unselfish, we do what they need/want/expect or do what we think that they need/want/expect.

We of course, end up feeling pretty bloody awful because it’s one thing if we are being and doing stuff because it’s truly who we are and without expectation of a reward of some kind, but invariably, we are not being ourselves and we also have an underlying expectation that we should be rewarded in some way, so lack of conflict, criticism, disappointment etc. Really, all we’re doing is operating under the misguided hope that one day somebody will say, “Wow! Isn’t _______ such an altruistic person? Did you know that they’ve thrown themselves under a bus thousands of times? I think it’s time that the universe cut him/her a break and let the good times roll.”

That’s not how it works.

Sometimes we get a tad set in our vision of how we think things ‘should’ be, so we think that because we’re being what we view as unselfish, that we should be cut some slack but we don’t take responsibility for the fact that we may be doing us wrong in the process. So many of us believe that being unselfish means ignoring the self.

Unselfish doesn’t mean little or no boundaries because the reality is, every person who has bad boundaries, on some level expects something in return. They do.

As grownups, our relationships need respect. This means that we cannot be talking about this whole selfish/unselfish malarkey in a dynamic where one party is expected to lack self-respect while the other enjoys what they see as their entitlements and benefits.

It’s not a bad thing to ask stuff of others but it’s a problem when a person feels entitled to compliance and seeks to benefit at the expense of others. It adds insult to injury when they’re met with a NO and then they squawk about people being “selfish”.

No person has a right to expect that because they need, expect, or desire something, that they should be able influence, control or even force others into obliging them. That is selfish.

Life is a journey and our purpose isn’t to go out of our way to create limitations and disadvantages for ourselves. Every time we burden ourselves with false obligations, we are living life to our detriment by using our time, efforts, energies, and emotions in unproductive, self-defeating ways. What we need to do in order to live happily and authentically is figure out and be who we truly are (life is on the job training for this) by healthily benefiting ourselves.

When we treat and regard ourselves with love, care, trust, and respect, this not only benefits us but it also benefits others because we engage in our relationships and various dynamics from a healthy place as opposed to what we can “get out” of people.

When we worry about being selfish, we have to ask:

Will me being and doing something to benefit me, harm others?

Note, the ‘inconvenience’ of a person not being able to benefit from where we are less than respectful towards us, is not ‘harm’…

If the negative effects of us doing something for somebody isn’t going to outweigh the benefits, we can go ahead… if we want to. It is our choice, not our obligation.

If we bust boundaries, whether it’s our own or those of others, that does cause harm.

If we avoid responsibility or prevent others from experiencing natural consequences, this also causes harm.

If we prevent ourselves from evolving or we try to get in the way of others evolving so that we can feel ‘safe’, that also causes harm.

When we think that we’re being selfish or somebody intimates or states this about us, we need to take a step back and ask ourselves: Is the person in question being and doing something to benefit themselves, that is harming me? What is it?

I hear from a lot of people who go No Contact for very valid, healthy reasons and yet they end up excessively worrying about the other person’s feelings while barely considering or taking responsibility for their own feelings and wellbeing. They feel guilty for opting out and not being able to take anymore. They think that they’re “selfish” for needing time to grieve.

It’s not going to harm the other party to break up or even go No Contact from a relationship and interaction that isn’t working. That’s not to say that they won’t be hurt but that’s not a reason to stay. If we respond to this guilt and start doing the whole keeping in touch to make their image stack up, sleeping together or whatever, they benefit and yeah, we experience the illusion of our ego benefiting but actually, this causes us a great deal of harm because we ignore the very real reasons about why we needed to step back and are also now exposing ourselves to further new pain.

It’s also not beneficial to keep placating a person’s ego just so that they don’t have to face up to the end of the relationship or even their actions. We should know – enough of us here at BR have been placated by people who do not want to “feel bad” about ending the relationship or how they have treated us and actually, it messes with our heads. It can be a vicious cycle to keep trying to appease people in order to make ourselves feel better. We need to learn how to do the right, healthier thing by us and take command of us feeling better.

There are always going to be people out there who are OK with being selfish and all we can do is do our best to stay out of their way and to engage with like-minded folk.

Be suspicious of anybody who has a problem with you wanting to evolve through increasing self-knowledge, self-awareness, and self-love. Boundaried people; people who take responsibility for themselves and want to evolve and see those they love and care about evolve, don’t bandy around the term “selfish” or try to guilt others into compliance. If you have an overall pattern of being kind and generous, somebody who respects you, will respect that you have the right to make choices for you when you need to (as do they for themselves), and will trust in you and your relationship rather than focusing on any so-called inconvenience.

Advice: Why won't he contact me?
Relationship/Drama Crack: Are You Creating Your Own Dynasty Level Drama?
When your love gets interpreted as desperation