When Someone Thinks That It’s Okay To Keep Disappointing You … But Not Others. Er… No It’s Not 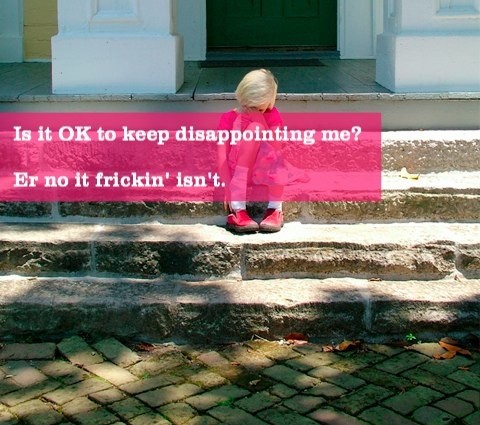 If you’ve been involved in an unavailable relationship, or been frustrated by certain friends, family, or coworkers, you may have noticed something which if you don’t heed the real meaning, you’ll instead take it as some sort of indication of your worth:

These people are often very comfortable with disappointing you by failing to meet your hopes and expectations, plus promises and plans that they’ve made, yet they’ll practically break their neck to ensure that they don’t disappoint certain people. They’ll do things like:

– Thinking that it’s OK to cancel on you if a better offer comes up.

– Thinking that it’s OK to leave it till the last minute to ask you out / to do something because they’re exploring all other options.

– Expect you to say YES. Always. Even when they know that they’re disrespecting you.

– Expect you to be all adoring, accepting and forgiving no matter what they do so even when they eff up, they don’t exactly go out of their way to genuinely apologise and show remorse, often expecting you to ‘move on’ (read: hurry the eff up and get over it so that they can press the Reset Button).

– Breaking it off with you to go back to the same person and then coming back to you when it goes tits up. Or just ditching you every time a better offer comes up.

– Failing to do something for you and then doing the exact same thing or similar for someone else even though you’re still waiting on them. Often they’ll keep telling you that they’re going to get to your job eventually but in essence they keep bumping you when something that they’re afraid to jeopardise their image over, comes along.

This can feel like a smack in the teeth and if you’re prone to internalising these experiences and inclined to correlate them to your worth, you’ll wonder “What’s wrong with me? Why are they being so nice to them / doing stuff for them but they’re not for me?” You may even feel like a fool and wonder why you’re the ‘exception’ plus it will cause you to question your judgement because even if you know that they’re just not that special and have in fact experienced some rather shady behaviour on their part, them pulling out the stops for someone else makes you wonder if you’ve misinterpreted their actions, or have missed the memo that informed you of what you’ve done to piss them off.

Their behaviour isn’t pretty, clever, or flattering and it’s only natural to feel away, or hurt and angry about it.

No matter how much self-esteem you have, in the first instance it smarts to experience that moment when you realise that really, you’re not a priority. You don’t rank high on their Best To Avoid Disappointing Index.

After the realisation strikes, it’s important to step back and see these situations for what they are – an opportunity to learn about the flipside to a person and how comfortable and confident they feel about maintaining the respect, trust, and affections you have for them no matter what they do. They know that you have them on a pedestal and that you have more confidence and love for them than they deserve.

People, rightly or wrongly, get a sense of how they can treat you and what they can get away with via their own actions and your boundaries which you demonstrate with your own actions and words. When you’re someone who strives to match their actions and words, as well as living congruently with your values, it’s very difficult to habitually disappoint people or even have one of those switchy personalities that picks and chooses who they want to roll out their nicey-nice and assholic character for, which is very inauthentic.

When you make a judgement about you based on how someone treats you, instead of judging their actions or at least the situation, you’re actually agreeing with what you think their assessment is and feeding into a widely held belief by people who struggle with low self-esteem, that inappropriate, unhealthy or even abusive behaviour has a rationale and can be accepted when the recipient of it isn’t worthy of something better, as if you’re communicating your worth and influencing their behaviour.

What you can learn from people who seem to think that it’s OK to disappoint you and to keep disappointing you, while appearing to be more conscientious with others, is that they’re clearly aware that they can and should act better and are actually capable of it, at least on a surface level, but they’ll show their real selves and let it all hang out to someone who they think will take them any which way.

The question you then have to ask yourself is: are you being the person who will take them any which way? Is it ok to disappoint you?

I learned from first-hand experience that if a person thinks that you’re blinded to who they really are, or you do know but don’t seem deterred, or they’ve been manipulative with their compliments to sell you their behaviour – “You’re so kind, generous, understanding, and supportive..” or even “I’m so glad you’re not like everyone else making demands on me..” – which you lap up and see as a compliment while they’re slipping their shady behaviour under the radar, they will gradually become increasing complacent and even careless about your feelings and your relationship. They’ll also feel free to disappoint you if they know that you’re validation hungry.

If someone believes that you’re so enamoured with them that you won’t leave, create conflict or consequences, or at least tell them to jog on (and mean it) when they try to push the boundaries, not only will they relax, but they just won’t value you enough to genuinely fear the loss of you.

When they can keep disappointing, it’s because they’re being believed in and given another chance, when really they should be getting the heave ho or at the very least, an increase in boundary security.

Of course disappointments can and will happen in life, because it’s inevitable that people, things, and situations will fail to live up to our hopes and expectations for them. That said, what you don’t want is certain people keeping you in their mental It’s OK To Disappoint Roladex.

No it’s not OK and actually whether you say it verbally or through action, make sure that you communicate this and stick to your guns, because when someone experiences medium to long-term consequences as opposed to short-term, hollow ones that they can eventually brush off and weasel their way back in on, they know to think twice about letting you down or recognise that they need to move on, because even if they appease you on a surface level like they do others, they’re never actually going to stump up with substance anyway.

And that’s something else to remember here – yes it would be nice if they saw fit to not disappoint you, but all that glitters isn’t gold and when you take them off their pedestal, you’ll see that due to their surface action, they have very little, if any, genuinely intimate, healthy substantial relationships. Even if you got what you think that they give everyone else, they’d still disappoint you on a deeper level.

The greatest amount of disappointment actually comes from continuing to hold out hope after someone has shown and told you who they are. Trust the feedback from their actions (or lack thereof) and instead of lowering your self-esteem, it’s time to adjust your perception and expectations of them, and act accordingly.

The Dreamer & the Shopper: Have you inadvertently found yourself in a fantasy relationship?
Defining Assclowns: Men you shouldn't want to date: Part One
A Tale of Making The Mistake of Being Friends With An Ex Mr Unavailable (Yes the Fire Still Burns)