Why You Should Imagine Yourself As Cool, Calm, & Confident When You Deal With Awkward Situations Like Bumping Into an Ex 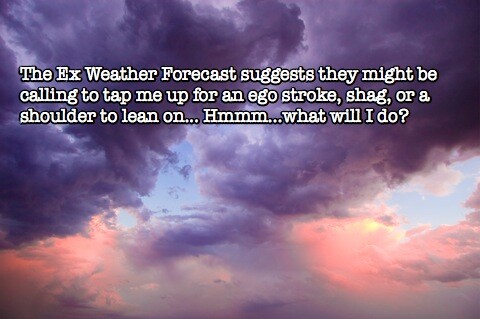 Our imaginations and mentality have a lot to answer for. When we consider a hypothetical situation and lack confidence in our ability to deal with it and in fact imagine the worst, we’re setting ourselves up to fail before we’ve even started. Where I see many people shoot themselves in the foot, is when they imagine coming face to face with their ex. They say stuff like “I hope that if I see him/her again that I can be strong” or “I hope I’ll be able to resist them” or “I know that if they say X/Y/Z or do A/B/C I’m going to give it another shot/wind up with my underwear swinging from the chandeliers”.

What you don’t realise when you picture yourself being weak or ‘effing up’ before you’ve even effed up is that you’ve already given up, accepted defeat, and resigned yourself to the inevitable.

The odd thing is that with all the ruminating and mixing up your overactive imagination with horniness and then potentially throwing inverted ego issues into the mix, is that with all that thinking, you’re not using any of that energy to come up with a plan A, B, or C. It’s like only the worst or whatever you envision can happen – nothing else.

Much like when you blame yourself, when you let yourself get hijacked by your imagination and remove your power, you’re being a perfectionist. Instead of being “It’s all my fault or not at all”, you’re now going down the road of “It’s going to be how I imagine or no other possibility”.

There’s a lot to be said for imagining yourself as cool, calm, and confident when you contemplate the possibility of being in a particular situation.

If in your imagination you see yourself bumping into your ex and being scared sh*tless or being in bed ten minutes later or them character assassinating you, well of course you’re going to have a shaky mentality! They’re already overpowering you in your imagination so it’s only a hop, skip, and a jump to do it in reality.

Instead of thinking the worst of yourself and ‘hoping’ you can survive the situation, imagine yourself cool, calm, confident and what you will do and even say. People who imagine themselves as hopeless end up being powerless. Thinking about what you will do is the beginning of being conscious and having self-control.

Don’t say “I hope I’ll be strong”; say “I will be strong”. What will you do if you’re in a particular situation? It’s time to start planning ahead positively. If you know that you already don’t want to do or be something and that it would be a bad idea, or have even been down this road before with them, you know you’ll say NO so work out what you’ll say and do. People who imagine themselves as having their own power end up using it and planning ahead.

I can tell you right now that you’re not going to call Ghostbusters – you’re going to have to call on yourself. You and only you can handle your situations. If you’re relying on the other party to Do The Right Thing especially when that’s not exactly their forte, you’re handing over your power and leaving your progress up to fate.

I made plans on days when my ex was most likely to make a move plus I was already keeping busy, to not only keep myself out of trouble, but to actually help redefine my life on my terms. I wasn’t going to be one of those people who keeps sacking off their friends to accommodate the whims of some guy, so I really meant it when I said I was busy…even if I’d made an agreement with myself that I was having some down time at home alone.

I find the ‘And…move…’ trick very useful. If you see them at a social occasion or bump into them, respond politely to their hello or even a little warmly, say ‘I’m great” when they ask how you are, and then say “I have to go / Have a nice evening (or whatever)”…and move away before you can be drawn into a conversation. Treat it like being professional with a colleague…which they might even be… The key is to avoid looking like a wounded animal by practicing smiling in front of the mirror where you don’t look like a maniac but instead come across as composed.

What you don’t do is launch into The Big Discussion about why you broke up, or why you’re still hurt, or what you think they should have done to change. I’d also avoid asking them if they’re single etc – that just says “I care WAAAAY too much about you.” You also don’t start flirting or trying to act like you’re friends – It is amazing the sheer volume of people that don’t recognise that you can be ‘friendly’ without having to be in a [pseudo] friendship.

If and when your ex calls, especially if you’ve gone No Contact and they do the sneaky sneaky and call from a blocked number, quickly regain your composure once you realise it’s them and say “I can’t talk right now” or “I’m actually on the way out so let me give you a call another time…OK take care byeee” even though another time might be in 2047…

PLAN A – Polite, friendly, firm and off the phone within 0-5 minutes, of if you don’t like them, go straight to PLAN C.

PLAN B – If they’re being rude or trying to draw you into something, polite, extra firm and exit within 1 minute. Remember it’s not important to have the last word or find out what the hell they want.

PLAN C – If they’re not taking the hint or you just don’t like them “Please stop calling me”…and hang up.

And let’s just cut right through the bullsh*t – I’m all for having a chat with a friend but if they’re trying to get into your pants or have been busting up your boundaries, or you still have feelings for them, then you’re not friends, which means you can be ‘friendly’ but you don’t need to hang around/stay on the phone for a great deal of time. It’s also OK to be unfriendly.

It’s also not a bad idea to practice saying the word NO out loud. Seriously because most people imagine saying NO and then quake at the thought of the sky falling in but don’t actually say it out loud, even to themselves. You’ll notice when you do say it that the room doesn’t start shaking like there’s an earthquake!

Believe that you can handle a situation because when you think you can’t, you won’t handle it and when you think you can and are not allowing anyone to steal your wind, never mind your power, you consider other options instead of thinking the inevitable is your only option. Don’t talk yourself out of succeeding before you’ve made a truly concerted effort to get on the path of change, which does involve getting out of your uncomfortable comfort zone.

Yeah it would be rather handy to experience these situations we fear and either zap them with our forcefields of power, have The Most Perfect Person in the Universe draped on our arm to scare them off, or have some 3rd party ‘thing’ occur that will somehow cause you to avoid conflict without you getting uncomfortable. I actually think half the time, we’re privately hoping the other person will change so that if we don’t exercise any self-control, we’ll somehow be quids up without having to get uncomfortable. Not.Gonna.Happen.

Be cool, be calm, be confident and plan ahead especially if you’ve been in this situation before – you have a good idea of what to expect so have a plan of action instead of looking to be the exception. If you’re going to predict a situation for yourself where you have control over what you do, forecast success.
Your thoughts?

I'm Off Mr Unavailables and Assclowns: Where will I find my passion and joy now?
Getting Over Him When You Thought You Were Friends Part One
Quiz: Are You Ready To Start Dating Again?