Advice Wednesday: Do I Have Problems That I Can’t Admit To Or Am I Being Manipulated?

Anna asks: How do you really know if someone is manipulating you or whether it’s you that’s really the one with problems and can’t admit to them?

One of the things that people who are lean on empathy or who tend to blame others struggle to do is admit when they have an issue or are at fault, which means that they’re also unlikely to truly reflect and ask this type of question. The type of person who asks this question is invariably somebody who is a habitual blame absorber. This doesn’t mean that they don’t have issues but what it does mean is that they tend to take responsibility for other people’s feelings and behaviour which includes assuming that because they have issues that they must be the one at fault or solely at fault. This makes them an easy mark for people who seek to influence and control via covert and more aggressive means. 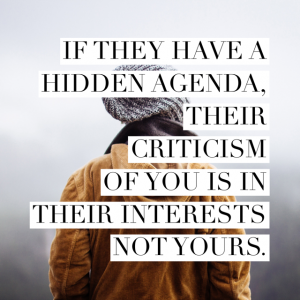 The question you have to ask yourself Anna is, Do I feel influenced and controlled by this person?

Every moderately healthy relationship does need two parties who are cognisant of where each ends and the other begins. You each need to be able to trust that yes, at times there will be conflict and criticism but that there is ownership–maturity, responsibility and integrity–at the heart of these more difficult interactions.

Anna, you need to be able to trust that when this person is flagging something up to you or doing something, that they’re not trying to influence and control you as a way of gaining an advantage over you or deflecting from their own issues. This is unscrupulous, unfair, and yes, manipulative behaviour.

You also need to have trust in you and I would take this questioning as a wake-up call to have a very real and honest conversation with yourself because this relationship is bringing up a lot of self-doubt for you.

In all interpersonal relationships, you each need to be open to giving, receiving and processing feedback, which yes, might come in the form of criticism. When you know that you are in at minimum, a caring, respectful and trusting relationship or that you at least have this level of relationship with you, you can be open to hearing feedback without taking it as a personal attack, court order to change, or as 100% true.

If this person is flagging something up to you and you don’t feel that you can query it so that you can gain more clarity and/or they are speaking or behaving in ways that suggest that there will be negative consequences if you were to assert yourself, this is a big problem.

Here’s a quick way of knowing whether you’re being manipulated:

If as a result of whatever this person has said and done, you feel as if you have less rights and more responsibilities and that they have more rights and less responsibilities, they are saying and doing things to gain influence and control.

So for example, let’s say that you’re sensitive to criticism because you had a very critical parent and experienced bullying at work plus maybe you’re not the most confident of people and you’re now in a relationship with somebody who when you flag up something that you’re uncomfortable with, they say that you’re “too sensitive” and “making a big deal out of nothing”, sure, you can acknowledge that there is that sensitivity but it doesn’t mean that you can’t have an issue with what they’ve said. In a manipulative situation, after these comments, you would end up second-guessing your feelings and the right to speak up plus you’d likely try to avoid conflict and criticism with plenty of people pleasing and blame absorbing, all while this person now has free reign to say and do as they please while dodging taking responsibility. You might try to query their comment but they’ll keep saying that it’s your problems and use your reaction against you.

People who are manipulative have an agenda. People who aren’t are not invested in being and doing stuff to try to influence and control you into doing things their way so that they can gain an advantage over you. The latter want to see you grow for you not for them.

In a non-manipulative situation, if they did make a comment like that, you could turn around and query the unfairness of that comment and point out what you feel is their part in the situation. This doesn’t mean that an argument might not ensue but it will pave the way to greater understanding because both of you are open to seeing the other party’s position.

Ownership in this situation would mean each of you recognising your baggage behind the situation (the past experiences) while also getting a sense of what is happening right now.

Even when something is hard to hear or see, when someone treats and regards you with love, care, trust and respect and you them, you’re not going to think of them as manipulative. You’ll admit that problem even if it’s just to yourself first before you will question their integrity to such a great degree, so it’s important to identify where this concern that they might potentially be manipulating you is coming from so that you can bring the truth out into the open and handle it. I will go back to my opening point:

The fact that you are asking this question suggests that you are being manipulated and are downplaying very real concerns about this person and being plunged into self-doubt and blame.

One of my favourite questions for gaining inner clarity in perplexing situations is: What am I pretending not to already know?

In this situation, Anna, this question could become: Why do I think that X is manipulating me?

Our relationships require us to know where we end and others begin. Without this, our boundaries are blurred and it becomes difficult to distinguish our feelings, perceptions and behaviour from others. Granted, we are always evolving and finding out new stuff about ourselves but if we have a good degree of self-knowledge and self-awareness, we’re unlikely to find ourselves in a situation where someone is telling us that we have a problem that we’re so unaware of that it doesn’t ring a bell with us. Pay attention to what they’re saying and doing and if you feel uncomfortable (you do), it’s a cue to be more boundaried. If this person is reliant on you reducing your boundaries, you have your answer.

Have you been confused about whether you were being manipulated? What did you do? What do you recognise now in hindsight?

To submit a question, email advicewednesday AT baggagereclaim.com. For in-depth guidance and support, I run an email and phone consultation service.

Podcast Ep. 155: Talking About Our Feelings (Part 2)
Chasing Crumbs & Perfection: In Pursuit of The Fantasy
Other People’s Behaviour: Why do you want it to be about you?
Share this...