Advice Wednesday: We’ve Been Sexting For 6 Months But He Doesn’t Want A Relationship (Or To Meet Up) 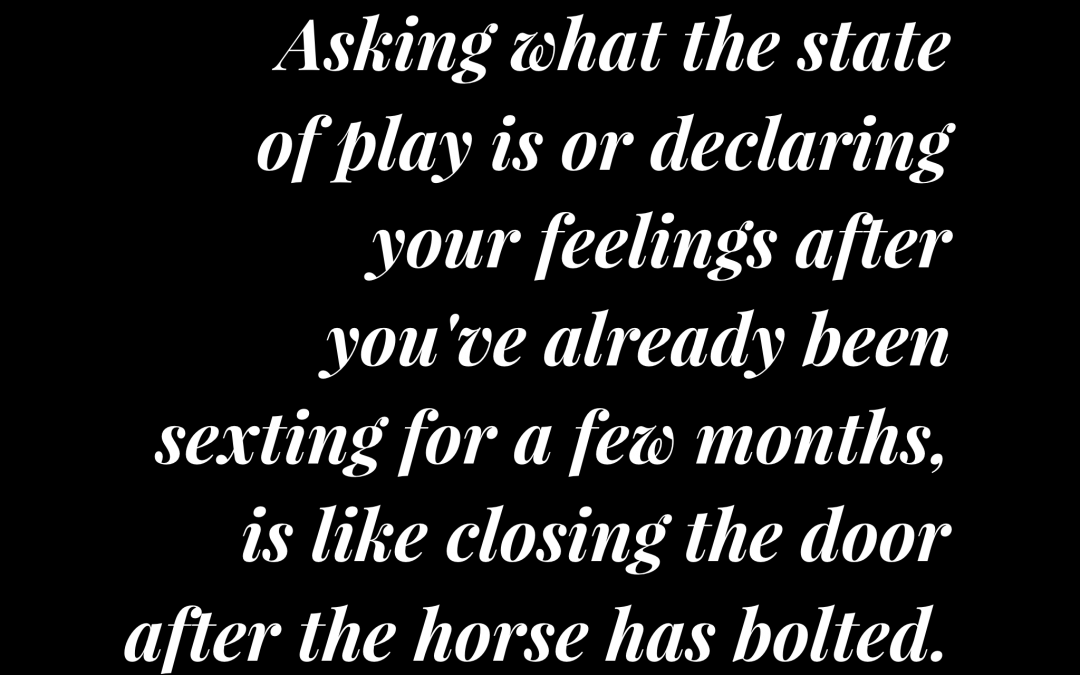 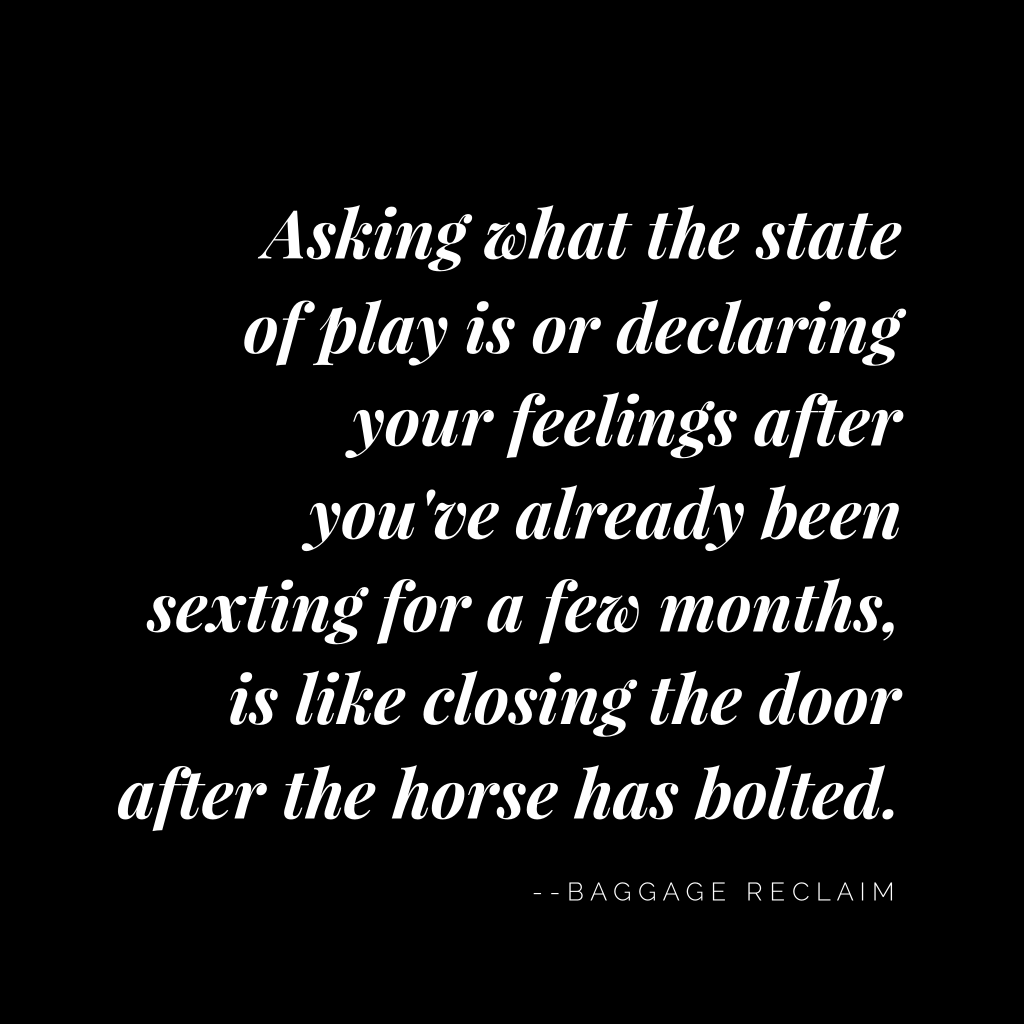 Effie asks: I met a guy online six months ago and we’ve been texting and emailing ever since. From early on, he made it clear that he found me very attractive as he sent me a picture of himself, you know, naked, and he wanted us to talk about what we would do to each other. I haven’t been involved with many guys and from what I hear, this is what people have to do now so even though I had my reservations, I sent him photos of myself. If I’m honest, I thought that this was a prelude to us being together properly but six months on and a lot of excuses, we have not actually met up yet. We don’t live far from each other (less than 30 minutes) and we clearly have a strong connection. I decided to tell him how I feel and he told me that he doesn’t feel the same way and that he thought it was clear that we were both having fun. I’ve also found out that he has a girlfriend. What does this all mean? Why am I the sideline chick? Where did I go wrong?

Effie, I need you to tell this story in an entirely different way: Six months ago, you were introduced via a dating site to this man who you still do not know from Adam. He sent you a picture of his pecker and you took that to be a declaration of how much attraction he felt for you, as if people only send pictures of their genitals because of how much they feel for somebody. On some level you’ve had some misgivings about exchanging sexy messages or in fact any messages with this man but have played along because you think that this is what dating in 2016 is like. This has continued for six months and you have assumed that the reason it’s continuing is because you have a connection and are building up to being together, but instead he has told you that your feelings aren’t reciprocated plus a bit of detective work has revealed that he has a girlfriend. It means that he’s bad news and to stop being used.

The truth is, you knew that this situation smelt more than a little funky but you doubted you and it’s also allowed you to delay on having to show up for a real relationship. We accept so much less when we are grappling with feelings of loneliness but also when there is a part of us that is afraid of having to fully put ourselves out there.

He has reaped the benefits of you being that dangerous cocktail of being too nice, naive and non-confrontational.

If you met someone tomorrow and you chatted to them for let’s say 10 minutes and exchanged, oh I don’t know, 750-1000 words, would you think it was strange if the next thing that came out of their mouth was an invitation to look at their privates or a request to look at yours. You’d probably think it was even stranger if you had that conversation, went to the bathroom and came back to find them with their pants down. Why do you think that this is even remotely okay with someone you haven’t even met in real life? If the expectation is to exchange sexy photos early on in the proceedings, what do you do a month or few in?

Sex is not an automatic precursor to being in a fully-fledged relationship. Neither is exchanging sexy photos. You don’t have to want or be in a mutually fulfilling loving relationship to do these things but if you only do these things as part of that, then you don’t share that part of you when it’s not.

You’re not being prudish or judgemental. You have agency over your body and what you do with it. If someone tells you to jump off a bridge, would you? No. Well just because somebody sends you a nude shot doesn’t mean that you’re obliged to send the same.

The truth is, if you live less than 30 minutes away and have been texting/emailing for a few weeks never mind six months, something isn’t right.

Someone who is interested in you, male or female, doesn’t spend six months sexting with you and dodging meeting up.

When someone is interested in you and for the right reasons, they make good on those intentions instead of languishing with you in an ambiguous state where they get to get their rocks off without having to pony up any real effort. They won’t put you in the position of demeaning you in any way or accentuating a state of confusion.

Hard as it may be to admit, you knew that he had a girlfriend or at the very least, that he wasn’t available. When you think about what pretending that you didn’t already know what you know afforded you, you will see that pretending that more was going on than in reality, protected you from having to show up in real life.

You ask why you’re the sideline chick and it’s because you participated. It’s not because it’s who you are or because you’re not worthy of being better but because you didn’t tell him to take a run and jump earlier in the proceedings. You asked little questions.

Telling someone how you feel after sexting with them for a few months is like closing the door after the horse has bolted.

You haven’t made one false move and made an available guy into this guy. He’s who he was at the start, middle and end. You didn’t have the wherewithal to understand who he was and draw your line. You do now.

This is an involvement that never got past stage 0. This is a fantasy involvement. Use this experience as a wake-up call to look into what it is that has you afraid of intimacy. When you can deal with your past hurts, you will not be prepared to accept crumbs and call them a loaf.

Have you been involved in an ambiguous email/text situation where you felt as if you were forging a relationship or even in one, only to find that they didn’t feel the same way? What would you advise Effie to do here?

Mixing Money & Men
10 Things That Make Online Dating Tricky If You Don't Have Healthy Love Habits - Part Two
When Should You Meet His Friends?