Are ‘False Negatives’ Causing You To Make Negative Associations? 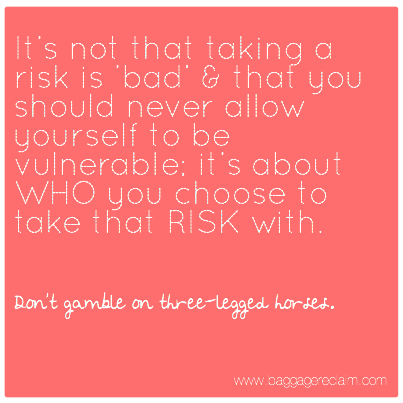 Every time I talk with anybody that’s struggling with boundaries and even has objections to enforcing them, or who is struggling with other tricky areas such as criticism, or who are tarring people who are X with the same brush because they had a negative experience with X in the past, what becomes patently clear is that they have a negative association which actually may be a ‘false negative’ – forming a conclusion based on this piece of information as if they now have all of the criteria to say “Computer says NO. This will create negative consequences.”

Something good can ‘equal’ something bad because you experienced something bad that had the something good in it. Prime example – being vulnerable and opening yourself up to someone. Of course if you were vulnerable with someone who went on to break your heart, you might just get the idea that it’s risking yourself that was bad, when that’s not the case at all. Healthy risk is needed for mutual healthy relationships. Taking a risk with someone who is a poor relationship ‘flight risk’ is like deciding that you’ll do your first flight in a plane with one wing or hardly any petrol in it.

Boundaries, for instance, are your personal electric fence that communicates to you and to others what does and doesn’t work for you. They alert you to discomfort and the idea is that by living in line with your professed values, you stay inside your own boundary lines. Others know the line when you know the line.

But…I hear from people who have one or a few ‘unpleasant’ experiences with having boundaries so now their automatic assumption and conclusion when faced with the prospective of asserting a boundary is to be filled with anxiety, ill feeling, and a sense of doom because what’s the point in asserting the boundary if they’re only going to {insert whatever the person / people did who have scared you off boundaries]? They forecast that the same or even worse is going to happen… even though this is not likely to be true unless you’re around someone or in a situation that’s very similar.

In one particular relationship in my early twenties, I drew the conclusion that there was a negatory on being myself.

I believed that being myself was what had ‘turned off’ my ex. After that, I put far too much of my efforts into trying to be whatever I thought the latest guy wanted while seething at the ‘rejection’ of not being myself and actually not liking me for not being true to me but also being frustrated about not knowing what being me was, because I’d been through more reinventions than frickin’ Madonna!

Now while I did go out with Mr Unavailable after Mr Unavailable, each situation was unique and actually, being myself wasn’t the problem, so diving in and changing me to preempt or ‘fix’ a problem was a bad move. Incidentally, having needs, having expectations, having boundaries, speaking my mind, being ambitious, being outgoing or even, wait for it, being black were all negative associations that I had that were unjustified.

But hold up a second now – how could you having rightful boundaries cause you to ‘lose’ a person that wasn’t already lost in some way?

It’s like saying “Well asking questions, expecting not to be respected, having some basic expectations, or saying NO means that you will scare off someone who would have stayed otherwise.” No they wouldn’t! They’re a hop, skip and a jump away from exiting anyway. The difference is, you could tow the line and be miserable at silencing yourself and then they’d go further at another point or you’d crack from selling yourself short.

Also was it really about having boundaries or were there other reasons why this relationship wouldn’t have worked?

It’s the same with criticism – does having some difficult experiences with criticism mean that you should never listen to any feedback or yes, criticism? Does it mean that the person doesn’t like you, hates you, or that something bad is going to happen? NO. But that’s just the tip of the iceberg of what people associate with criticism. I associated ‘failure’ and ‘making mistakes’ with getting into trouble over homework and exams and not wanting to displease and feeling below standard. I’ve been an adult for 17 years (bloody hell) and yet I’ve only cottoned onto this negative association in the past year or so.

And then there’s tarring people who are or do X with the same brush.

I remember when a guy I went to college with spent the summer in the US and came back behaving oddly towards me. Turned out, his girlfriend cheated on him with a black guy and so now he had a negative association with all black people! He actually told me this with a straight face. If she’d cheated on him with a white guy, would he have started hating himself and every white guy?

Every time this guy saw a black person, he felt dejected, rejected, hurt, and angry, but the black guy wasn’t the problem.

It’s the same for other negative associations. Feeling distrusting of 6ft tall people because you had a bad experience with a 6ft tall person is actually sending false information to you that’s saying ‘Tall equals don’t trust the mofo.’ or ‘Short man equals not worthy of my time’ or ‘Cracked a few jokes on a date, must be trying to pull a fast one on me’ even though the person who pulled a fast one on you had far more obvious indications of that than ‘being funny’.

What has to be remembered is context. The association you make may be situational but it is not definitive for all people or situations with the ‘factor’ outside of the context.

Yes you may have been hurt by someone who was funny, with a big job and lots of friends but it doesn’t mean that you should be wary of people like this and try to be with someone who lacks a sense of humour, has no job or a ‘lesser’ job than you and is a loner because you miss the point of what it was that really hurt about the relationship, which means actually, you could end up with the opposite and still end up with similar hurt. I pretty much did this with two exes and in the end, it wasn’t these factors that broke the relationships – one was very shady for lots of reasons and the other was also shady and had drug and alcohol problems.

Negative associations borne from ‘false negatives’ tend to be irrational while also painting you into a corner of being in a cycle of repeating unhealthy behaviour because you’re blinded by the association.

You get over negative associations by repeatedly correcting yourself when presented with it (“No, boundaries are not bad. If I do X, Y, Z, it’ll mean that I …….”) as well as reminding yourself of what happens when you proceed on a negative association. It’s also important to judge a person and a situation on merit and reality (“Is it fair to say that all people who have opposite sex friendships are dodgy?”, and also do things that created positive associations – I felt so empowered when I said NO, when I opted out, when I took action and learned that having boundaries, for instance, is a good, positive, necessary thing.

It would be more useful for you to have negative associations with things that you may have misguided ‘positive associations’ with – code amber and red behaviour. It is amazing the number of people who ignore these and yet would write off someone for pretty innocuous reasons!

Rebound Relationships in a Nutshell: Transitionals, Buffers & Why You Should Step Away From The Ligh...
Guest post: Drama Demons...
Quiz: How Commitment Resistant Are You?