Being ‘Friends’ Can Be a Blind Spot In a Romance 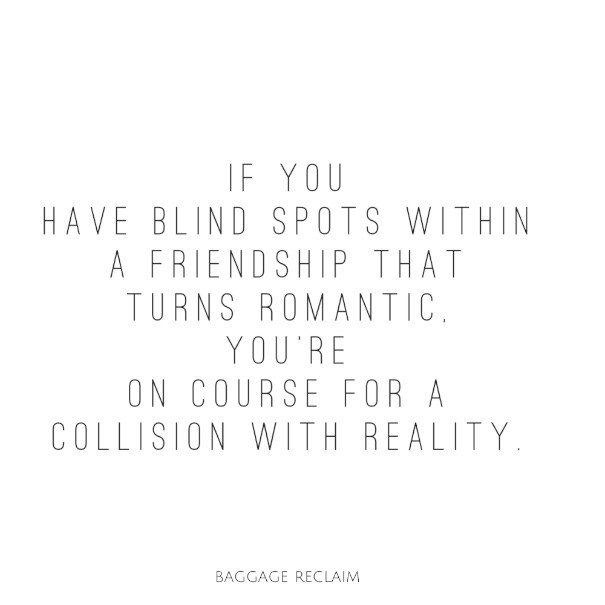 I got back from my Christmas break and my inbox had exploded with tales of relationships gone sour and eerily, ninety percent of the emails featured a friend in the starring role of heartbreaker. It caused me to wonder: Are we a bit loose with the term ‘friends’ and masking denial about the true nature of these relationships or, do our friends get all switchy on us when things cross into romance, unleashing a side that we were unaware of?

There are five particular reasons why we have blind spots with friends who turn into romantic partners:

What becomes clear when we consider getting involved with a friend or we listen to the optimism of any mutual friends, is that many of us are us are die-hard romance fans, loving the idea that after all of the heartache, bad dates, booty calls, mommy/daddy issues, and unanswered texts, emails, and messages, that all along, the person were meant to be with was right in front of us. We love the idea that maybe it’s all been about getting our respective bad romances out of our systems and then finding each other and living happily ever after. Hell, some of us will even convince ourselves that we’re in love because we’re willing to listen to all of their drama and complaining about current partners, picturing us as being the one who makes them a better person in a better relationship. It doesn’t occur to us that maybe part of why we’re hanging around this person is about being a Florence Nightingale or even a Buffer and that we get value out of being needed. It might also be that the friendship has been a distraction from having to pay closer attention to our own feelings and what’s going on in our life.

Our friends love the idea of The Good Girl or The Good Guy ‘taming’ the friend who can’t commit or has even been a playa or an assclown. They’re subscribing to the myth that all that this person needs is the “right” woman or man to come along, as if it’s not a question of character and shared values to name but a few things. They want a good ending but admittedly might not want to deal with the discomfort if things don’t work out.

In retrospect, when things take a turn for the worse and it’s all tense in the friendship group or we’re even on the outside of things, we also begin to wonder why our friends thought that we were “such a good match” for somebody who has treated us how they have. Going through the breakup (or breakdown if it the relationship didn’t make it to official), will be a triple blow if we’ve not only lost our hopes for the relationship but the friendship is all weird (or over) and we’ve fallen out with mutual friends or are feeling bruised by them not taking sides.

It’s important to note that sometimes we have very different ideas about what constitutes friendship so we might be holding this person in a higher esteem than they do us plus, we don’t acknowledge that sometimes we call it friendship in order to feel special and different to all of the other women/men in their life who they’re messing about.

There are clearly friendships that do blossom into romance and there are also people who have never been friends who forge wonderful loving relationships, but good things don’t come out of blind spots so it is too much for us to expect things to go well, if we’re not seeing a person and our relationship with them in full colour with our feet in reality.

When friendships go sour after romance, while sometimes it’s about what went down in the relationship and not being aware of certain core value differences that might not have been clear in the context of the friendship, often it’s about a blind spot and the expectations and assumptions that came off the back of these. If we value, not just the friendship but also any mutual friendships, it is important for us to stay grounded because if we don’t and we ignore code amber and red information because, ya know, we’re friends, we will end up with far more loss and hurt than we bargained for. Friendship doesn’t change the need for boundaries.

People love saying stuff like, “The best relationships start off as a friendship”, but loving relationships have friendship in them regardless of whether they started off a friendship because they’re copiloting. Only a healthy friendship is going to turn into a healthy relationship, so pretending that it’s a friendship to make it feel better or ignoring issues or our own boundaries, is a recipe for pain, especially because we need to ensure that we’re ultimately also being a good friend to ourselves.

Advice Wednesday #1: How do I deal with my draining faux friend neighbour?
What's your relationship deal breaker?
Who's Parked In Your Relationship Space?