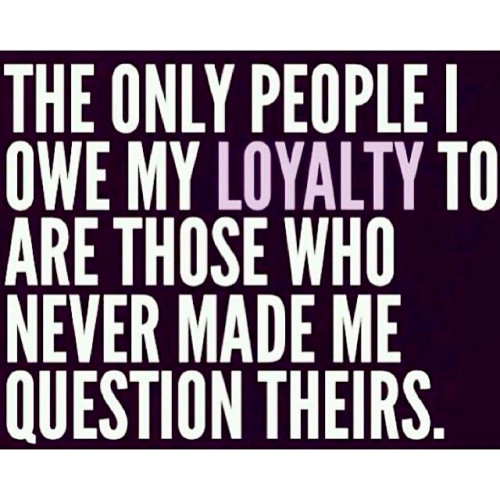 Expecting me to be and do the things that I expect of others, is something that’s stopped me from driving myself batty, but it’s also been a really helpful indicator of where I need to step back. In the past, I’ve shown an alarming lack of loyalty to myself while at the same time continuing to engage with certain people out of what I believed at the time were my show of loyalty and devotion. Of course this type of double-edged pledging of allegiance, where you effectively keep throwing you under a bus for someone who isn’t even on the same proverbial road as you or who will throw you back under that said bus because they don’t acknowledge, respect, or even desire that loyalty, is exactly how I ended up feeling deeply compromised and rejected. It would hurt that I could go to those lengths and I still couldn’t change them or get their loyalty.

I’m not alone in having felt this way and not being au fait with what being loyal actually means.

Don’t mistake being willing to compromise the essence of who you are and even your willingness to endanger your emotional, mental, physical, and spiritual wellbeing, for loyalty and devotion.

Loyalty isn’t the same as not having boundaries and tuning out of shady behaviour and situations.

Loyalty, that sense of where we consistently communicate and demonstrate our strong feelings of support, needs a foundation of reality and at the very least, acknowledgement, care, trust, and respect. On both sides.

Loyalty is something that happens over time and with experience. Like trust, it needs to be increased on the basis of supporting evidence, not increased to make up for the decrease in your sense of self or the decrease in their contribution to what should be a mutual relationship, romantic and otherwise. Just as meeting breaches of trust with more trust, is a recipe for pain, so is giving away loyalty without due diligence.

We cannot know what loyalty means if we have no affinity to it within us because in reality, if we would betray ourselves repeatedly in the name of ‘loyalty’, that’s not about showing strong support for someone with a core thread of respect and mutuality; that’s about codependency, being excessively emotionally reliant on that person and hoping that by giving in this way that it will create a tipping point of reciprocation.

It’s the whole giving out what we want to get back. The trouble is, we confuse what we’re doing with what it actually is. If we’re not being loyal and we’re actually engaging unhealthily, it’s unrealistic to expect that what will be sent back is going to be healthy – that would be to ignore the reality of the situation.

It hurts when we’ve been loyal to someone and they betray us.

It hurts when our loyalty is taken for us being a sucker.

It hurts when, OK, yes we clearly have some things that we need to address within ourselves but our desire to love and be loved is met with cruelty.

It also hurts when we take another person’s betrayal and then we judge ourselves for them having done so.

It definitely hurts when we’ve been misguidedly loyal and instead of learning from this, we decide that we weren’t loyal enough.

Loyalty is a decision and the choice and actions to continue need to be conscious ones. As always with anything to do with people-pleasing, it’s not about what we do but why we do it. Being loyal is a great quality – it just needs to be channelled appropriately.

When we are really honest about why we remain loyal and devoted to someone who shows us that it’s not respected, acknowledged, or appreciated, the truth is, we are remaining loyal to our dream, our vision, our hopes and expectations for that person or even for what we thought we could have been and had if only they had reciprocated ours. We’re not really being loyal to the actual person.

We continue to put forward our brand of loyalty and devotion even when that person is disloyal or just not even there, because we believe that what we’re doing can, will, and should be able to influence that person’s feelings and behaviour. It’s the whole being and doing certain things with an awareness of what we feel that we deserve and then in recognising that it’s not happening, blaming us for not being “good enough” when we really should be asking ourselves, who and what we’re being loyal to. And of course it’s going to provoke our sense of entitlement because realistically speaking, who doesn’t expect a little respect and acknowledgement for their support?

Dig a little deeper though and what will be revealed is a conflict of interest between what we perceive that respect and acknowledgment to look like and what they’re willing to do. We might expect that person to effectively change and step outside of their comfort zone in order to make our own feel better.

People who need integrity, love, care, trust, respect and the intrinsic value and authenticity of a mutual relationship, don’t reward your loyalty with disrespect, derision, or betrayal. They don’t. If anything, they defend their values and identity with consistent and authentic actions and words because they value what it was that communicated to you and others that support was and is a good investment. They’re also highly unlikely to want be in a situation where you’re doggedly loyal due to lack self-love, because it’s not love.

We must be careful who we devote ourselves to, especially if there is an expectation of reciprocation. When we’re around like-minded folk, this is somewhat easier and it’s the same for mutual relationships, however, when we’re having to clobber the bejaysus out of them and even have to raise these folk from the ground up, it’s time to halt. Don’t row a boat with one oar…

Being loyal is a quality that you should value, both within you and others, but don’t mix it up with servitude (being completely subject to someone more powerful) and investing you in dodgy activities as a means of avoiding dealing with yourself.

It runs back to the whole litmus test of giving, helping, and authenticity – if you wouldn’t be or do something if you didn’t think that you were going to receive the perceived and predicted reward, step back. Re-examine your motives and whether your expectations are realistic.

If you’re getting hurt by your loyalty and devotion to someone, it’s time to acknowledge that you do rightly expect to be respected and acknowledged, but this is not the situation or the person where that is happening.

Did they truly earn your trust and support? If not, that explains the disparity between what you expect and what you’re getting.

If they did earn it, was it earned easily or on merit? Or what’s changed? And no it’s not your worth because integrity doesn’t vanish even if what you thought was loyalty has, and to blame it on your worth, is to keep up this whole owning other people’s behaviour and pretending that you have Jedi mind tricking ability.

Was it one-sided? Code red alert. Sometimes you can be so busy being loyal and essentially overcompensating for the other party, that you don’t realise how little they actually do in your relationship until you actually have a need and you’re left hanging.

Embrace and channel your ability to be loyal in a positive way. Giving your loyalty to people who don’t know their arse from their elbow, is a misappropriation of this quality and the beauty you have within to feel connected with people. Ultimately, loyalty starts at home. Don’t go giving it away until you know that you unquestionably have your own back.

Are You Open To Interpretation? Why Healthy Relationships & Happiness Have No Room For Ambiguity
If They Won't Cosign To The Truth, It Doesn't Invalidate It
The trouble with blending in