Being The Other Woman: The Lessons I Learned Part 1 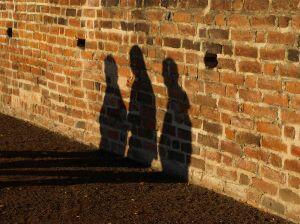 I was watching Oprah today (a luxury of being on maternity leave…) and it was a brilliant episode on the touchy subject of being the Other Woman (OW), the often exciting but even more excruciating understudy role that so many women take up. I must admit that I was surprised when Oprah revealed that she had been an OW in her twenties and that as well as being this, she then had to be the OW to another OW that he was involved with!

Regular readers of this blog will know that I was an OW for about eighteen months and it was the most soul-destroying, self-esteem knocking, frustrating, powerless thing I have ever done.

I wrote about my experience last year and everything I write about being the other woman and also about emotional unavailability is what I have learned through too many experiences of acting on my sh*t taste in men! The fact of the matter is, no matter what you think about your situation, the overwhelming majority of OWs will not be getting the Camilla Parker Bowles ending. Yes she got her man in the end, but she waited a hell of a long time, had to do a hell of a lot of home-wrecking along the way, and will still always play second fiddle to the original wife (Diana) even though she passed away over ten years ago.

So what did I learn?

When you’re the other woman, you’re an escape from reality. Trust me, he’d never want the type of reality that he has with his wife/girlfriend with you, because that would mean that it would get boring. It took me a while to realise it but if he had actually done the one in a million act and left her, we wouldn’t have been sexing it up all the time, real life would have slipped in and I would have had to listen to him talking about himself all the time instead of say, 20% of the time.

They are all liars. I don’t care what hokey cokey stuff he’s said to win you around, they have to lie in order to maintain the situation. I rationalised the situation by telling myself that he was only lying to her for her protection but not a general liar. Looking back I realise what an idiotic thing that was for me to think. Lying is lying and the only way that he could juggle both of us was by lying to both of us–there’s no such thing as an honest cheat.

Your situation with him is not unique. In my book on emotionally unavailable men, Mr Unavailable and the Fallback Girl, I explain how most OWs feel that their situation is unique, but you would be surprised how the excuses for having an affair all boil down to only a few basic excuses that are trotted out the world over. It doesn’t matter if you’re in a mud hut in the middle of Africa, or in what you think is your plush life in the city; LOTS of men claim that their partner doesn’t understand them. MANY claim that they are no longer sleeping with them. PLENTY claim that they stay with their partner for the kids. SOME claim that their jobs frown upon divorce. OTHERS say that she wouldn’t be able to cope. MOST of them claim that they are just waiting for the right time, the right moment, the right second/minute/hour/day/year to break the news. I don’t deny that every situation will feel unique to you but the great thing about the key relationship issues that befall us, is that they are shared the world over and the problems are as old as time itself. I only have to talk to friends who have been OW’ or read the many comments about it to know that there is nothing unique about it all because it all boils down to him being a cheat. How and why he does it isn’t really that important because it all boils down to dishonesty and a lack of integrity. 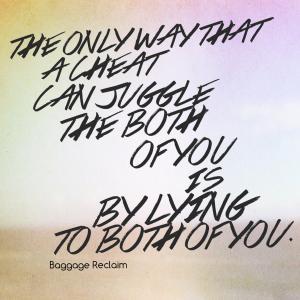 Men that cheat are manipulators. While you might not want to see his behaviour in this light, he has to manipulate you in order to manage the situation. The manipulation, while he might not perceive it as such, is all of the stuff that he says to get you on side, to get him off his back, and to keep you on ice so that you don’t break away looking for a new guy. All of sudden I looked too good for other guys, every guy was trying to shag me, and if we were out he’d claim that I hadn’t given him enough attention. All of these things added to the belief that if I just tried a little harder and was a little less strong and independent, he would leave her.

Cheats very rarely leave their wives or girlfriends. Thank God I am not still waiting because of course he’s still with her. If I met him today and asked him why he was still there, he’d say it was because I left him. That’s total bullsh-t. The mistake I made with him is not walking away when I realised that he had a girlfriend. Instead I fought hard for ‘my’ man.

Women treat being with married or attached men like a competitive sport. We are nurturers, most women have self-esteem issues of some sort, and we like to dig our heels in for the long haul and prove our worthiness. My whole relationship with him became focused on me getting him to leave her. My self-esteem gradually took a battering and the reality is that even though I believed that getting him would lift me to prime status, I was an emotional wreck. Men love doing the Poor Pathetic Me Whine – “She doesn’t understand me. She won’t give me a blowjob. She’s needy. She doesn’t sex me the way I’d like to be sexed. She’s demanding.” This translates in our mind to “I will understand you. I will give you blowjobs till you’re coming out of your ears. I won’t need you too much. I will sex you just right. I won’t be demanding and ask too much of you”, and it becomes like a marathon that never ends. Our self-esteem is tied into our success at gaining his attention but most importantly, gaining him, so of course the longer that he stays with her, the longer that his actions don’t match his words, is the lower and lower your self-esteem sinks. I know some women who don’t feel that a man has been validated unless he ‘belongs’ to someone else. The sad thing is that by being involved with my ex, I invalidated many of the good things I believed about myself and relationships and I really had to piece myself back together again and get a sense of who the hell I was.

These men take part-time lover to a whole new level. When I look back at my ‘relationship’ with him, I realise that I was with him for less than 10% of an entire week. If someone else told me that they were going to give me ten percent of their time, I’d tell them to f*ck off! Instead my life was snatched moments, texts, emails, lonely birthdays, Christmases and pretending to my family that I was single when I was emotionally invested in a cheat.

Check out parts two and three.

How to cope with being the other woman

Breaking Up With and Getting Over a Married/Attached Man

The Justifying Zone: when a woman needs to justify her emotional or sexual investment
When Mr Unavailables and Assclowns Drip-Feed You Info Part One
The Broken Windows Theory Applied to Boundaries & Self-Esteem: Time to fix your window(s)!