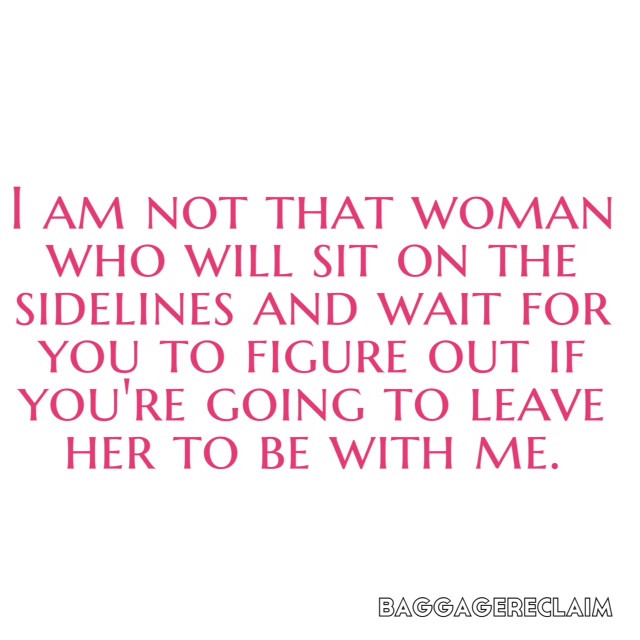 This post was originally published back in 2006 and had such a huge response, I had to take it offline as it was causing problems with the server. It’s now been republished but you can see the updated version here:

1. Have your escape route planned. If you have any sense of self-worth planned, don’t be banking on being the other woman forever. Either get the commitment you want and be the starring role instead of the understudy, or get out. Set a time limit and stick to it.

2. Don’t be burning up energy making empty threats. Sometimes an ultimatum is needed to bring things to a head, but if you have no intention of actually following through – you’ll look like a dipstick and then he knows that he doesn’t actually have to make a decision. An ultimatum is an ultimatum for a reason which means there should only be ONE.

3. Do tell someone but do ensure that you tell someone who isn’t going to blow the lid on things. Keeping things to yourself will be a big strain emotionally and you need someone who you can confide in, sanity check things with and who will also tell you that you should be doing better.

After The Breakup: Hold Tight To Your Self-Respect and Stop Trying To Be Friends With The Ex That Mi...
Should I Give Him A Second Chance? Or a 3rd, 4th, 20th?
Ep. 66: Why Did We Break Up?--Where's My Boyfriend?