‘I Can Change Him/Her’ syndrome: Don’t tie your worth to trying to control the uncontrollable 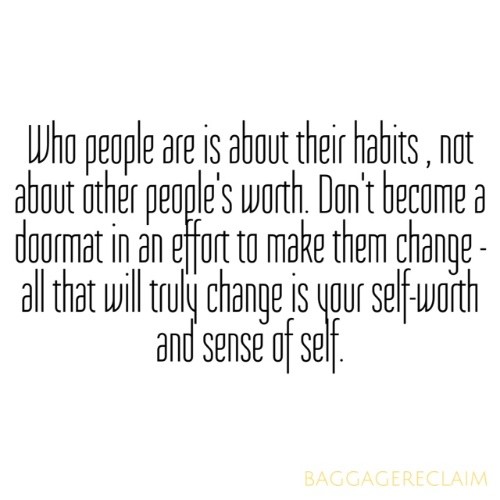 When people share their stories with me and a recurring theme emerges, I ask: If we look at this story a different way, why are you consistently attracted to and involved with partners who pretty much need to spontaneously combust into another person with a different set of values and habits in order to make you happy?

‘I Can Change Him/Her’ syndrome is a habit of engaging in relationships that are fixer uppers. Like property, it’s where you take on a partner due to what you regard as their potential due to the return on investment you’ll make from renovating, redesigning, or even stripping them right back and raising them from the ground up.

Someone with an I Can Change Him/Her habit of thinking and behaviour believes that the love and relationship is valuable if they have to work hard for or even fight for it and ultimately be made the exception. This is a key reason why people get involved with unavailable partners especially the heavy duty commitment dodger and assclown versions. When the person blows hot or throws crumbs, it feels like more than the loaf that could be gotten from an available partner.

We can’t get full structural surveys done on people and while there are signs that we can look out for and be mindful, the reality is that we’re going to have to live in the dating phase or the relationship for a bit to get a sense of whether or not it’s a good fit. Here’s the problem:

Some issues are not immediately visible and even if they are, they may not be understood or they might be misdiagnosed and or prescribed the wrong fix.

Someone who gravitates to or remains in a fixer upper is a fixing/healing/helping Florence Nightingale and is assuming that they can fix the issues that arise with their own brand of love. They assume that they’re the solution to the problem or that the potential they forecast will take care of everything. This is similar to purchasing a property, discovering serious structural issues and rather than recognising and addressing the source of these, focusing on the cosmetic and comfortable parts of the work.

Every person who has ever tried to change a partner in an unavailable relationship misdiagnoses the issue by wondering:

By making the issue an It’s About Me one, they’re not only misdiagnosing it but prescribing the wrong solution. They also wouldn’t be in this relationship or certainly continue if they weren’t deriving a sense of purpose from it. They need to feel needed.

These relationships feel safer. I’ve been guilty in the past of using my poor self-image as a cue to date down. I would punch below my weight by dating people who needed to spontaneously combust into someone else if we were to have had a mutually fulfilling relationship with love, care, trust and respect.

I didn’t want to date an available man or even someone with a fraction of the issues I normally went for because I didn’t believe in me. I figured they’d work out that I was a f*ck up whereas a fixer upper would value and appreciate me because I was ‘boosting’ them. At first they’d be all over me like a rash and then the code reds and ambers that I’d turned a blind eye to or rationalised would dominate the relationship. My insecurities would unfold, I’d try to please them into changing, what little boundaries I had would disappear and I’d hate myself and then I’d feel that I had to stay because they ‘owed’ me. I couldn’t walk away.

These relationships keep us busy, give us a sense of purpose and also help us to avoid ourselves and having to step up. We mistake talking the hell out of what’s going on for communication and taking action. We don’t admit that we partly take on these projects because they allow us to feel in control even though we’re not (it’s the whole feeling safe in an uncomfortable comfort zone and also preferring to put our energy into controlling the uncontrollable rather than being vulnerable and taking command of ourselves), and also because there is a part of us that believes that we’ll realise our own potential and even right the wrongs of the past if this person does as we want.

While there can often be cosmetic changes that occur in relationships such as shifts in style, tastes, hobbies and interests and growing together in direction as you move through different life stages, in fixer upper relationships, there’s always an element of wanting the person to change their fundamental character and values. What also distinguishes these relationships from others where the partners accept each other and grow and evolve together is that the basis for happiness or even basic stability in the relationship relies on the changes happening.

The ‘I Can Change Him/Her’ syndrome quick test

1) Is the relationship unlivable without the desired changes and structural work?
2) Are you trying to influence and even control this person’s behaviour by being pleasing? E.g. Sex, ego stroke, shoulder to lean on, competing with their existing partner or even ex partner.
3) Do you take their lack of change or inability to consistently meet your desired potential as a personal slight on you? Does it resurrect old wounds?
4) Do you think or talk about the relationship in terms of ‘investment’ and what you feel you are owed?
5) Have you been and done things with the underlying expectation that you will be rewarded by them realising your forecasted potential for them?

If you answered yes to any of these and it’s a theme in your relationships, you suffer with ‘I Can Change Him/Her’ syndrome.

The problem with using a person changing their fundamental selves as a means of valuing you is that whatever you want to change becomes a focus of blame for why you’re unhappy but also why the relationship isn’t working. That isn’t to say that whatever it is isn’t a problem but it also leaves you helpless, especially if who they are without that change in effect cripples your self-esteem. It’s also ignoring the greater issue of why your value and sense of purpose is riding on an external source – that’s a codependency issue because this reliance makes you excessively emotionally reliant on that person when the value issue truly comes down to the way that you feel about you.

What really pains people who invest in these relationships is that they often end up boosting the other party into the next relationship, either because they think that they can do better or because they’re ‘charged’ and ready to go after convalescing and even reaping the benefits as a fixer upper. It’s important to note that most people don’t like being pitied or feeling unacceptable and these two things are prevalent in a fixer upper relationship even though it can be very discomforting to recognise their existence.

The first step in bringing awareness into the equation is recognising that if you feel motivated to be with someone due to their potential and your Florence activities, there is something about the person and the relationship that you’re defining as a worth and ‘right’ person issue. Spend some time evaluating the origins of this habit especially where you may be playing out old patterns and trying to right the wrongs of the past. What you’re doing is likely causing you to remain loyal to a pattern and dynamic that’s keeping you small and removing your power.

It’s not about whether you’re worthy or whether the right person will inspire them to change. You are already a worthwhile and valuable person but if your relationship is based on both of you having to change – one to create the debt (you with the pleasing etc) and the other to pay it back – then it’s not a relationship that love is truly going to grow out of. If anything, it will mostly be pain and you deserve better than basing your self-esteem on how much you can influence the feelings and behaviour of others. Invest in you and you will want very different partners.

There’s lots of posts on BR about unavailable relationships, self-esteem, and breaking toxic patterns. If you want to go deep, check out The Pattern Breaker ecourse.

Building Boundaries for Healthier Relationships
If They Won't Cosign To The Truth, It Doesn't Invalidate It
Character is who you are even when no one is watching.