Do you really feel guilty, or are you hiding out? 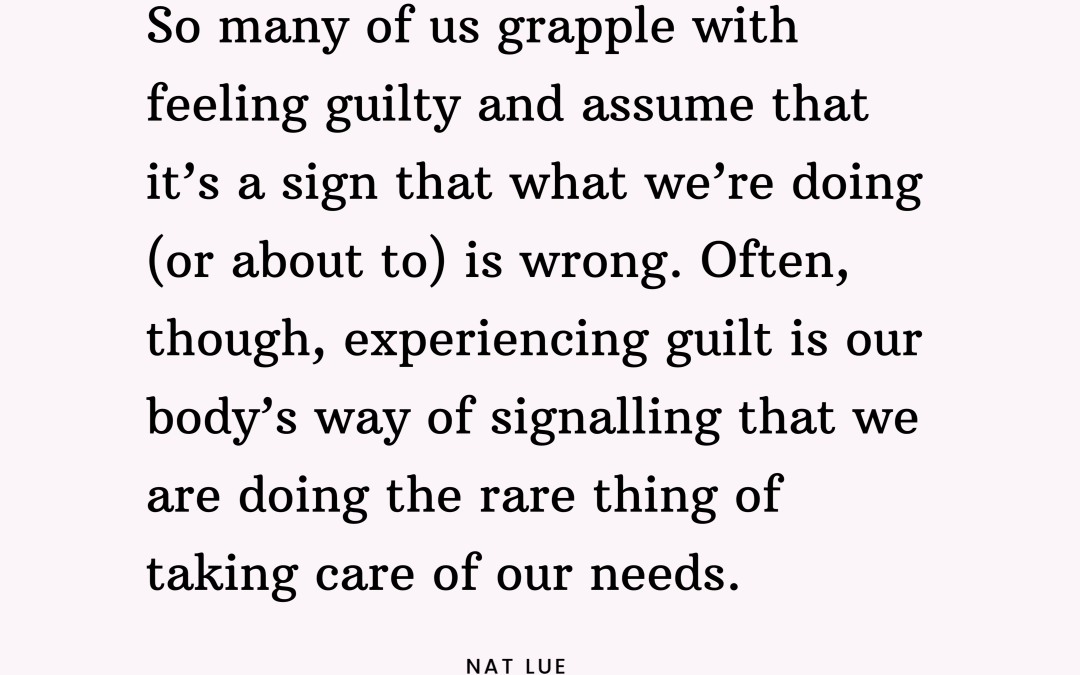 Have you ever found yourself in a cycle of saying how guilty you feel about something? It can lead to paralysis or spending more time beating you up than you do taking positive action. What happens when you do nothing? You make no decisions or avoid them. You worry too much about what others might think and how you will look. Overthinking shows up in the form of trying to work everything out to the nth degree and trying to predict the future. Guilt might make you risk-averse and hyper-aware of the possibility of loss or messing up. Worse, you might feel bad about something that wasn’t bad, and so you focus on pleasing an unpleasable. You may be beating yourself up or atoning for something that doesn’t warrant it.

Guilt being misleading doesn’t mean that we shouldn’t experience it when we become aware of wrongdoing. But we’ve also got to keep it real and moving. Unless we’re going to process the guilt and go deeper so that the experience positively transforms us, what’s the point?

Sometimes claim that we’re feeling to justify beating ourselves over the head or our current inaction.

A key reason for dining on guilt or even using it like an everyday condiment that we add to every experience is believing that it stops us from screwing up. We believe that if we don’t stay guilty, we’ll let ourselves off the hook and forget. We don’t want to wind up with fresh hurt or feeling bad all over again.

Another reason, though, for stockpiling guilt like the toilet paper so many of us were afraid we were going to run out of at the start of the pandemic, is that we think it makes us a ‘good person’. That, and stockpiling guilt prepares us for every eventuality.

Heaven forbid we’re caught on the hop without guilt for past misdeeds piled-up ready for us to beat ourselves over the head as yet another reminder of why we’re not good enough!

We might think that if we keep making us feel bad, eventually the guilt will pay off the source of our persistent feelings of shame. We hope it will set us free. While sometimes the ‘source’ is the actual or supposed wrongdoing, often, it’s not. The guilt about something current or recent is often a cover for something much further back in our past. It’s likely also something on which we define our identity and what we think is or isn’t possible for us. If we, for instance, have always blamed ourselves for why our parent was unhappy or they overlooked our sibling, or for why we were inadequately parented, feeling guilty can be our attempt at paying off our feelings of unworthiness.

We wind up with an overactive guilt thyroid. Feeling guilty about ‘everything’ often results in bad boundaries, stressful interpersonal relationships, and neglecting our needs, desires, expectations, feelings and opinions.

Why didn’t I do that thing? Because I felt so guilty about it, like I was hurting [the person] by even contemplating it.

This creates a self-fulfilling prophecy where we wind up feeling crappy and stuck. We convince ourselves that it’s just plain bad news if we consider and take care of ourselves. And so by feeling perpetually guilty about anything and everything, we’re always prepared and never ‘too happy’. We’re prepared to be disappointed, to be screwed over, to have to back down, to put our needs and desires on hold, and, yes, to yet again be wrong and bad.

When we’re perpetually guilty, we don’t have to be vulnerable.

It’s good to have a conscience, but it’s also good to be honest.

Guilt is an easy emotion to reach for that allows us to dine out on feeling bad without really having to interrogate why we feel as we do and whether it’s even required. It actually lets us feel good about ourselves, like “Look how caring, thoughtful, hard-working I can be in that I feel this guilt.” But what we have to ask ourselves is, What’s the purpose of feeling guilty?

Are we really guilty of something? Or, is our guilt our default diagnosis for anything and everything that puts us in danger of being honest about where we’re dishonest with ourselves? Is it a cover for why we’re not being and doing the things we know we need or want? Or, is it a way of avoiding doing the thing that we don’t want to do anyway, only now we can claim that we do, it’s just that we haven’t earned it, atoned enough for wrongdoings, or become worthy enough?

What about if we tend to feel guilty just for considering our needs for a nanosecond?

This is where we ask, What can I say to myself when guilt strikes to calm anxiety about wrongdoing?

And if we believe that we’ve committed actual wrongdoing, and we also feel genuinely guilty about it, what’s next? Now that we’ve done the feeling, when will the do–ing kick in? After all, if we are feeling guilty and, as we can with any emotion, using that intel to guide our subsequent actions in an emotionally intelligent way, we’ve done more than just feel the feeling or even beat ourselves up—we’ve worked out what we can do.

We always know that we are not yet being truthful with us when we still feel bad about something despite opportunities to gain perspective and take action.

And ultimately, that’s what divides our faux (and sometimes stale) guilt from genuine guilt: actions that lead to healing, growing and learning.

Tips for The End of a Friendship
Are you sabotaging yourself by not allowing you to be happy?
Forgiving Me For Abandonment